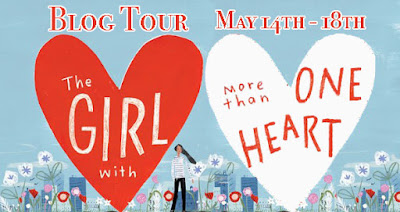 Welcome to Day #1 of The Girl with More Than One Heart Blog Tour!

What led you to middle grade as the best medium for the story you wanted to tell?
by Laura Geringer Bass
I didn’t choose to write a middle grade novel about a girl who loses her father. Instead, my 13 year old heroine, Briana chose me.
About a decade ago, I was struggling with the loss of my own father. I wasn’t a child
or a teen; I was a grown mother of two teenage boys and my dad was ninety-four years old when he died. I knew I was lucky to have had him in my life all those years but I missed him terribly.
My father had been a storyteller and before he died, I made tapes of him telling my sons his favorite shaggy dog stories. (One of those stories walked right into my book in the chapter called “Three Wishes.”) After my dad died, I transcribed those stories. I began to write a memoir about “Grandpa Ben” with the intention of giving it to my sons. It was called “Salt of the Earth” because that was my dad’s highest compliment when he liked someone. “He’s salt of the earth!” he would say. And usually he said it twice with great relish as if he were tasting something delicious. “Salt of the earth!”
I showed that memoir to my wonderful editor Tamar Brazis at Abrams and she confessed it made her cry. She asked me to turn it into a novel. I thought that was a fine idea but I wasn’t sure how to do it. In fact, I didn’t have a clue. I was writing YA fantasy at the time, a book called “Sign of the Qin”, set in a make believe medieval China with demons and dragons and shapeshifters and a monkey king with magical powers. I didn’t know how to write a book with realistic characters so close to home. So I put it aside for a while.
On the anniversary of my dad’s death, I found myself at my desk in the middle of the night. What I wrote during those sleepless hours turned out to be the opening lines of “The Girl With More Than One Heart:”
“The day my father’s heart stopped, I discovered an extra heart deep in my belly, below my right rib. It talked to me. I wasn’t crazy. Before that day, I had just one heart that never said a word.”
Suddenly, I was writing in the voice of a young girl who had lost her father. I named her Briana. She was thirteen years old, in eighth grade. Like me, she was listening to the remembered voice of her Dad, a voice so powerful it felt as if it were coming from a new heart deep inside her —a heart she called her “Dad heart.”  She needed that extra heart to guide her and help her navigate her loss.
So did I decide to write a middle grade book for pre-teens and teens? I guess on some level I did but it felt more as if my young heroine, Briana found me, her voice found me. That voice even gave me my title: “The Girl With More Than One Heart.”   I hope Briana’s voice finds the children and teens out there who most need to hear it during times of grief, loss, loneliness, trouble and transition and that the love and hope in Briana’s story help them get through.
*****
Blog Tour Schedule:
May 14th — BookhoundsYA
May 15th — The Book Rat
May 16th — Page Turners
May 17th — Book Briefs
May 18th — Crossroad Reviews 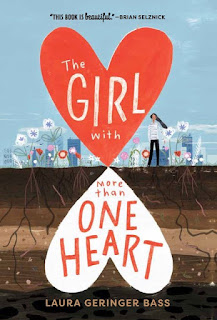 There are times we all feel we need more than one heart to get through. When Briana’s father dies, she imagines she has a new heart growing inside her. It speaks to her in her Dad’s voice. Some of its commands are mysterious.Find Her!  it says. Be Your Own!

How can Briana “be her own” when her grieving mother needs her to take care of her demanding little brother all the time? When all her grandpa can do is tell stories instead of being the “rock” she needs? When her not-so-normal home life leaves no time to pursue her dream of writing for the school literary magazine? When the first blush of a new romance threatens to be nipped in the bud? Forced by the loss of her favorite parent to see all that was once familiar with new eyes, Briana draws on her own imagination, originality, and tender loving heart to discover a surprising path through the storm. 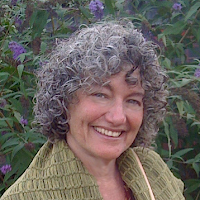 About the Author: Laura Geringer Bass is the author of over 20 highly acclaimed books for children, tweens, and teens.

Her new novel for middle graders about friendship, love, and loss — The Girl With More Than One Heart — is the lyrical story of a courageous girl who imagines she needs an extra heart to navigate her grief after the death of her dad.

Laura serves on the National Advisory Board of First Book, a non-profit organization that has delivered over 170 million books to children in need and as a mentor for Girls Write Now and Prison Writes, teaching teens at risk.

Giveaway Ends 5.23.18 and open to all who can legally enter.
Open to anyone with a US mailing address, sorry no PO Boxes
Must be over 18 or have your parents permission to enter.
An email will be sent and you have 24 hours to reply or a new winner will be chosen.
The Winner will be announced within 24 hours at the end of the giveaway.
Giveaway is organized by Bookhounds and sponsored by the Publisher
Please add BookHounds@Hotmail to your address book. You can also email to verify if you have won.
It has no affiliation with Facebook, Twitter or any other entity.
Not responsible for lost or misdirected prizes. 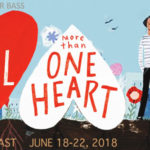 #Giveaway Excerpt THE GIRL WITH MORE THAN ONE HEART by Laura Geringer Bass @LauraGeringer @abramskids Ends 7.12