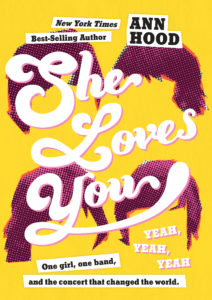 Filled with love, hope, and longing, this is a novel for readers of all ages.” – Holly Goldberg Sloan

Bestselling author Ann Hood crafts a funny, heartfelt story of a girl growing up in the heart of Beatlemania.

The year is 1966. The Vietnam War rages overseas, the Beatles have catapulted into stardom, and twelve-year-old Rhode Island native Trudy Mixer is not thrilled with life. Her best friend, Michelle, has decided to become a cheerleader, everyone at school is now calling her Gertrude (her hated real name), and the gem of her middle school career, the Beatles fan club, has dwindled down to only three other members–the least popular kids at school. And at home, her workaholic father has become even more distant.

Determined to regain her social status and prove herself to her father, Trudy looks toward the biggest thing happening worldwide: the Beatles. She is set on seeing them in Boston during their final world tour–and meeting her beloved Paul McCartney. So on a hot August day, unknown to their families, Trudy and crew set off on their journey, each of them with soaring hopes for what lies ahead.

In her signature prose, Hood crafts an extraordinary story of growing up, making unexpected connections, and following your dreams even as the world in front of you–and the world at large–is changing too fast.

Ann Hood is the author of the best-selling novels The Book That Matters Most, The Obituary Writer, Somewhere Off the Coast of Maine, The Red Thread, and The Knitting Circle, as well as the memoir Comfort: A Journey Through Grief, which was a New York Times Editor’s Choice and chosen as one of the top ten nonfiction books of 2008 by Entertainment Weekly. She has won two Pushcart Prizes as well as a Best American Spiritual Writing Award, two Best American Food Writing Award, and a Best American Travel Writing award. A regular contributor to the New York Times, Hood’s short stories and essays have appeared in many publications, including Ploughshares, Tin House, Traveler, Bon Appetit, O, More, The Wall Street Journal, The Washington Post, The Paris Review, and others. She is the editor of the anthologies Knitting Yarns: Writers Writing About Knitting, Knitting Pearls: More Writers Writing About Knitting, and Providence Noir. Hood is also the author of books for children, including the middle-grade novel, How I Saved My Father (And Ruined Everything Else), and the ten-book Treasure Chest series for young readers. Her new memoir, Morningstar: Growing Up with Books, will be published in August. She lives in Providence, Rhode Island, and New York City, and is married to the writer Michael Ruhlman. 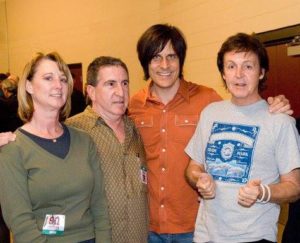 I think every girl’s favorite Beatle is Paul McCartney, just like Trudy, of course, I love Paul.  My brothers and sister all got to see the Beatles in 1966 at Dodger Stadium because we had season tickets for baseball there.  I didn’t get to go.  I was way too young since I was only six.  That is me on the right side, my husband next to me, Rusty, who plays guitar for Paul.  I have known Rusty since I was 16 and he was the best man at my wedding.  Rusty had a dream that he played on stage with the Beatles when he was eight and when he got the call to play on Paul’s album, it was like a dream come true.  This was my dream come true and all thanks to Rusty.

But I have a confession to make, I always loved Ringo more than Paul.  I bought all of Ringo’s records and would listen to them obsessively since he was the funny one.  A boy who could make me laugh was more important than anything to me.  I love that all of their films are now available on DVD so I can rewatch those silly movies like Help! and A Hard Days Night.  Ringo was the backbone of the Beatles and will always remain first in my heart. Sorry, Paul.

June 18 – BookHounds YA – Favorite Beatle and why

June 20 – It’s Just About Write – Author Guest Post: If it starts with the Beatles, what makes boy bands and the stories they inspire still so popular today all these decades later?