THE SELKIE OF SAN FRANCISCO 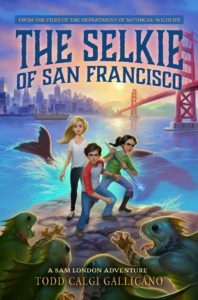 In the thrilling sequel to Guardians of the Gryphon’s Claw, an epic adventure novel that “is sure to keep lovers of Rick Riordan running to the shelves,” Sam London dives headlong into his second case involving a selkie, a mysterious girl, and an ominous new threat to the mythical and human worlds ( School Library Journal )!

Sam London didn’t mean to uncover an ancient secret, but when he found out that mythical creatures are real and living in our national parks, he became the newest recruit to the Department of Mythical Wildlife. Ever since, the middle schooler has been anxiously awaiting the call for his next case . . . and it finally arrives with the brazen appearance of a selkie in San Francisco Bay.

Along with Dr. Vance Vantana and the guardian Tashi, Sam pursues the selkie, who has taken a peculiar interest in fashion’s newest “it” girl and social media star, Pearl Eklund. But the closer he gets, the more questions emerge about Pearl’s mysterious connection to the mythical world. Is she the long-lost hope for an entire civilization or the harbinger of its doom? It’s up to Sam to find out the truth, and fast. . . . The fate of humanity hangs in the balance.

Praise for Guardians of the Gryphon’s Claw, Book One:

“A death-defying, globe-spanning adventure, packed with creatures out of folklore and myth.” –Publishers Weekly

“So original and exciting. This is the best fantasy-adventure novel I have read in some time.” –Martin Olson, New York Times bestselling author of The Adventure Time Encyclopaedia

The boy who had seen the gryphon was now seated across the woman who had also seen the gryphon. It was an improbable reunion, and one Sam London had never anticipated. But there they were, two human beings from different generations and backgrounds brought together, once again, by a mythical creature who had chosen to make a surprising appearance. Unlike with the Bakersfield incident, this time it was Gladys Hartwicke who held the answers Dr. Vantana sought. Sam was sitting next to Vance on Gladys’s overly colored couch in her overly decorated living room. It was as if she had owned a large home and forgotten to downsize her furniture when she’d downsized her living space. The couch was comfortable enough, but Sam was certain the fabric incorporated every hue in the color spectrum. Gladys could have any shade of throw pillow, and it would have gone perfectly. The pillows she did have appeared to be handmade and were as colorful as the couch.

Gladys sat in a red velvet armchair and clutched a small porcelain cup of tea, which clinked and rattled each time she took a sip and placed it back on its saucer. Tashi stood off to the side and refused to make herself comfortable, as Gladys suggested repeatedly. Gladys kept glancing over at the stoic Tashi, reminding her every few minutes that she could sit down, but Tashi wouldn’t budge.

“I am perfectly comfortable where I am, but I thank you for your concern,” the Guardian told her each time the woman made the suggestion.

Gladys was kind enough to provide them with glasses of water and set out a plate of cookies. She explained at length that the latter were originally intended for her nephew and his new fiancée, but she had promptly rescheduled their visit following her experience on the dock that morning. She had a feeling that the strange doctor from Bakersfield might be paying her a visit.

“I’m not authorized to discuss the events at Death Valley. However, I can confirm that what you saw there was a gryphon and what you saw today was a selkie. They are both real and you’re not crazy,” the doctor assured her.

“I knew I wasn’t,” Gladys said with a relieved smile. “And what is a ‘selkie,’ exactly?” she inquired.

“A mythical sea creature of sorts,” Vantana explained. Then he added cautiously, “Ms. Hartwicke, I can’t prevent you from talking about this to anyone else, but I’d urge you to keep our conversation to yourself. For your own safety, of course.”

“Of course,” Gladys replied. “Who would believe me anyhow? They’d think I was a crazy person who was seeing things—­just like last time.” Then she added in a whisper, “But it’s certainly nice to know the truth.”

Gladys nodded. “I did, indeed. I watched him in the water. He swam so fast. Like a torpedo. Shoom! Right to the boat slips. Everyone else was still staring at the sea lions, expecting him to pop back up, but I took off for the slips. I wanted to meet him!”

“And did you?” the doctor asked.

Gladys shook her head with disappointment. “I startled him. I do that to people sometimes. He stumbled and ran off, but not before he dropped something. I have it drying on the windowsill.” Gladys stood and walked to the large picture window in her dining room area. Vance followed, along with Sam and Tashi. The afternoon sun beamed into the apartment through the double-­paned glass as Gladys retrieved a wrinkled piece of paper that was propped against the window. She handed it to Dr. Vantana, who studied it. Sam craned his neck to get a better glimpse. It was a cover torn from a fashion magazine. The colors were faded and streaked, no doubt the result of being submerged in salt water. An odd thing for a mythical sea creature to be carrying, Sam thought.

Despite the cover’s poor condition, Sam could see that the model pictured had big blue eyes; porcelain-­white skin; and light, almost silvery blond hair. She looked like an angel. According to the text on the cover, this was Pearl Eklund, a “fresh new face in the fashion world.” Her name was circled in a green substance that Sam determined to be dried seaweed. Vance turned the cover over to reveal an ad for San Fran-cisco’s Fashion Week that announced the participation of the world’s top models and designers. But something else caught Sam’s eye.

“Look.” He pointed to the page. “The girl on the cover is going to be at this event. And that seaweed is around her name again.” Sure enough, the same dried seaweed circled “Pearl Eklund.” Sam’s eyes darted down to the bottom of the page, where the event information was printed, before quickly glancing to the clock on Gladys’s wall.

“This is today! Like, right now. Do you think—­” Sam started to ask.

“Yeah, I think,” Vance interjected, standing up. “I haven’t the slightest idea why, but that must be where he’s headed.” The doctor turned to Gladys. “Ms. Hartwicke, thank you. This information could save lives.” 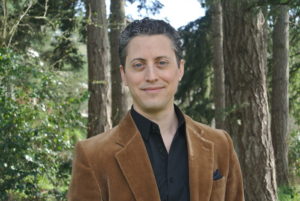 Todd Calgi Gallicano is the author of “Guardians of the Gryphon’s Claw,” the first case in the Sam London Adventure series from the Files of the Department of Mythical Wildlife. A graduate of New York University’s School of Film and Television, Todd began his career in the film industry, before venturing into the world of books when he was provided secret files from the Department of Mythical Wildlife’s archives.
​
Despite pressure from the news media and government, Mr. Gallicano remains tightlipped when it comes to questions about the DMW and his sources within the secret organization. He encourages fans of Sam London to learn more about mythical creatures and to visit and support our nation’s majestic National Parks.
​
When he’s not hammering out the next Sam London novel on his 1938 Royal Deluxe typewriter, Mr. Gallicano enjoys spending time with his wife and daughter. He resides with his family in North Carolina, where he is constantly on the lookout for gargoyles, chupacabras and other nefarious creatures.

3 winners will receive a finished copy of THE SELKIE OF SAN FRANCISCO, US Only.