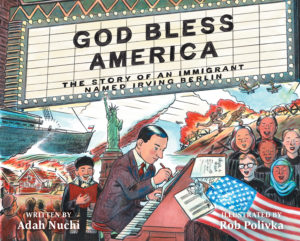 An inspiring portrait of an immigrant and the gift he gave his new home.

Persecuted as Jews, Izzy Baline and his family emigrated from Russia to New York, where he fell in love with his new country. He heard music everywhere and was full to bursting with his own. Izzy’s thump-two-three, ting-a-ling, whee tunes soon brought him acclaim as the sought-after songwriter Irving Berlin. He ignited the imaginations of fellow countrymen and women with his Broadway and Hollywood numbers, crafting tunes that have become classics we still sing today.

But when darker times came and the nation went to war, it was time for Irving to compose a new kind of song:

A song for America.

And so “God Bless America” was born, the heart swelling standard that Americans have returned to again and again after its 1918 composition.

This is the tale of how a former refugee gave America one of its most celebrated patriotic songs. With stirring, rhythmic text by Adah Nuchi and delightful, energetic art by Rob Polivka, readers will be ready to hum along to this exuberant picturebook.

I’ve spent much of my life wishing I were Ginger Rogers (or at least wishing that I had her dance skills and her wardrobe), so until a random Google search of Irving Berlin taught me otherwise, I had no idea he was anyone other than the guy who wrote White Christmas and Cheek to Cheek. Who knew that he had also composed God Bless America—and 1,500 other songs?! But hooray for Google, as it not only introduced me to Irving’s vast body of work, but also to his life as an immigrant, his patriotism, and his contributions to America. Plus it gave me an excuse to listen to a whole lot of Irving Berlin’s music. While God Bless America: The Story of an Immigrant Named Irving Berlin, focuses largely on Irving as an immigrant and patriot, I still wanted it to reflect the rhythms of Irving’s life. I listened to his music and also to the music that surrounded him while writing, and I tried to translate that music into words. The following songs served as my inspiration, and are a soundtrack for the book:

After the Ball, Charles K. Harris’ waltz from 1891 or 1892, which was one of the most popular songs of the time, inspired Irving’s newspaper-selling thump-two-three, ting-a-ling whee song.

Give My Regards to Broadway, Scott Joplin’s Maple Leaf Rag, and later on, Irving’s own Alexander’s Ragtime Band, is the music that clanged out of windows in Tin Pan Alley.

For Your Country and For My Country and Let’s All Be Americans Now, are the cloppity-clop-thwack, march, tramp, pow rhythms of the United States Army that Irving used to encourage citizens to enlist in the war effort.

Oh How I Hate to Get Up in the Morning is his toot-a-root soar, whisper, rise, blare song that bemoans the army bugler.

Manhattan Madness and Let’s Have Another Cup of Coffee, from the score to Face the Music were new to me, and made me want to tap-tappity-tap (though not as much as his songs Puttin on the Ritz and Let Yourself Go.)

Blue Skies, which, I listened to on repeat, appears in several of his films. But no one makes it go scat-a-tat-tat like this Ella Fitzgerald version.

When I Lost You, which he composed following the death of his first wife, and Always, which was written as a wedding gift to his second wife, are songs that swing high and moan low.

And then there was Irving’s boom-rah-rah song, his song for America. Which was, of course God Bless America. 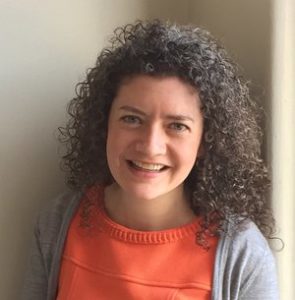 Adah Megged Nuchi was first introduced to the children’s publishing world at home, as the daughter of a children’s book art director. She began her own publishing career at the National Book Foundation, and later at Houghton Mifflin Harcourt Books for Young Readers, where she was an acquiring editor of picture books, middle-grade, and young adult fiction for seven years. Her books have been named to the Kids’ Indie Next List, YALSA Best Books for Young Adults, and Indies Introduce New Voices lists. As an editor, she most loved finding new talent and working with authors to shape a story.

3 winners will receive a finished copy of GOD BLESS AMERICA: THE STORY OF AN IMMIGRANT NAMED IRVING BERLIN, US Only.