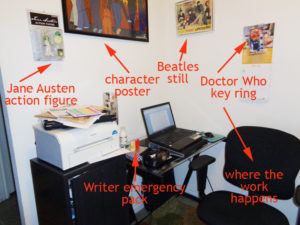 My desk always leans towards being in a state of chaos that it can’t entirely reach because it’s too small to go full chaos. Everything revolves around my laptop, which sits in the centre of the desk. Then I’ve got a bunch of stuff like a USB flash drive, portable hard drive, headphones, and a portable DVD drive sitting up there too, all waiting to be plugged in whenever I need them. Sometimes stacks of illegible rough notes add to the clutter. I peer at them and wonder what I was talking about! 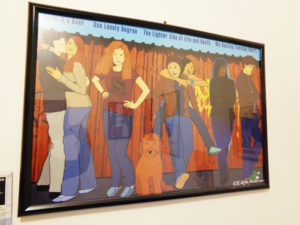 When I get stuck in the writing process I reach for the Writer Emergency card deck pack that you can see in the snapshot. They were brought onto the market via a Kickstarter campaign a few years ago and offer a bunch of cool ideas to get into gear again. For some reason at the moment I have a twenty cent coin from Ireland hanging out on the desk too. My husband and I go to Ireland every year and I have no clue if this coin is from the last visit we just got back from a few weeks ago or some earlier occasion. It’ll probably remain there permanently where it can keep my sister-in-law’s scribbled phone number company.

The extra lamp is a necessity because when fluorescent light bulbs started to replace incandescent ones the den where I do most of my writing was just too dark without additional lightening. It’s the farthest room in the apartment from any windows so it’s a bit cave like. A fantastic illustration my husband did of some of my early young adult book characters hangs directly above the desk so if I look up I’m glancing at Nick and Sasha from I Know It’s Over, Finn and her dog Samsam from One Lonely Degree, Mason and Kat from The Lighter Side of Life and Death, and Ashlyn and Breckon from My Beating Teenage Heart. 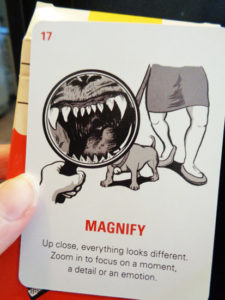 A Jane Austen action figure hangs next to them to keep me inspired and underneath that sits a printer, an ancient laptop (which comes in handy whenever the current one is at the shop) and a filing cabinet which contains a mess of stuff from useless cables, professional paper work and a bulging file folder of newspaper articles that in theory I’ve saved to fuel possible future books but in reality which I never look at. I can’t concentrate hard enough to write at coffee shops or out anyplace so this room is where almost all my writing happens. Thanks for having me over to Bookhounds to talk about it. 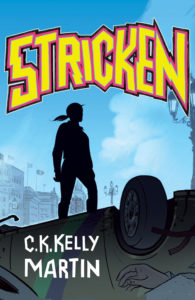 Naomi doesn’t expect anything unusual from her annual family trip to visit her grandparents in Ireland. What she expects is to celebrate her thirteenth birthday, hang out with her friends Ciara and Shehan, and deal with her gran’s Alzheimer’s. What she finds is a country hit by an unexpected virus that rapidly infects the majority of the Irish population over the age of twenty-one.

Amnestic-Delirium Syndrome (ADS) starts off with memory loss, but the virus soon turns its victims aggravated, blank, or violent. Naomi and her friends must survive on their own, without lucid adults, cut off from the rest of the world, until a cure is found.

But there are whispers that ADS is not terrestrial, and soon Naomi and her friends learn the frightening truth: we are not alone. 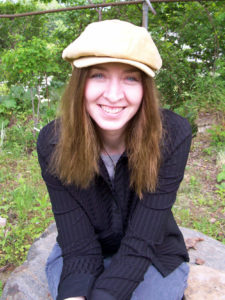 Long before I was an author I was a fan of books about Winnie the Pooh, Babar, Madeline, Anne Shirley and anything by Judy Blume. Throughout high school my favourite class was English. No surprise, then, that most of my time spent at York University in Toronto was as an English major—not the traditional way to graduate with a B.A. (Hons) in film studies but a fine way to get a general arts education.

After getting my film studies degree I headed for Dublin, Ireland and spent the majority of the nineties there in forgettable jobs meeting unforgettable people and enjoying the buzz. I always believed I’d get around to writing in earnest eventually, and I began writing my first novel in a flat in Dublin and finished it in a Toronto suburb. By then I’d discovered that fiction about young people felt the freshest and most exciting to me. You have most of your life to be an adult but you only grow up once.

Currently residing near Toronto with my Dub husband, I’m an aunt to twenty-one nieces and nephews, and a great-aunt to two great-nephews. I became an Irish citizen in 2001 and continue to visit Dublin as often as I can while working on novels about young people.

My first young adult book, I Know It’s Over, came out with Random House in September 2008, and was followed by One Lonely Degree, The Lighter Side of Life and Death, My Beating Teenage Heart and sci-fi thriller Yesterday. I released Yesterday’s sequel, Tomorrow, in 2013 and put out my first adult novel, Come See About Me, as an ebook in June 2012. My most recent contemporary YA books, The Sweetest Thing You Can Sing and Delicate, were published by Cormorant Books’ Dancing Cat Books imprint in 2014 and 2015.