A HEART IN A BODY IN THE WORLD by Deb Caletti
Source: Publisher
Goodreads 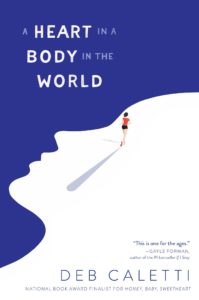 When everything has been taken from you, what else is there to do but run?

So that’s what Annabelle does—she runs from Seattle to Washington, DC, through mountain passes and suburban landscapes, from long lonely roads to college towns. She’s not ready to think about the why yet, just the how—muscles burning, heart pumping, feet pounding the earth. But no matter how hard she tries, she can’t outrun the tragedy from the past year, or the person—The Taker—that haunts her.

Followed by Grandpa Ed in his RV and backed by her brother and two friends (her self-appointed publicity team), Annabelle becomes a reluctant activist as people connect her journey to the trauma from her past. Her cross-country run gains media attention and she is cheered on as she crosses state borders, and is even thrown a block party and given gifts. The support would be nice, if Annabelle could escape the guilt and the shame from what happened back home. They say it isn’t her fault, but she can’t feel the truth of that.

Through welcome and unwelcome distractions, she just keeps running, to the destination that awaits her. There, she’ll finally face what lies behind her—the miles and love and loss…and what is to come.

Praise for A HEART IN A BODY IN THE WORLD

“Masterful… This is one for the ages.” ―Gayle Forman, New York Times bestselling author of If I Stay

“Caletti’s novel dazzlingly maps the mind-blowing ferocity and endurance of an athlete who uses her physical body to stake claim to the respect of the nation.” ―E. Lockhart, New York Times bestselling author of Genuine Fraud and We Were Liars

“More than bittersweet… It will nestle inside your brain as well as your heart.” ―Jodi Lynn Anderson, award-winning author of Midnightat the Electric

I know why but this story really struck a nerve with me.  It is the current state of affairs in this county and this is the right book at the right time and it needs to be read by everyone.  I think just being a woman in this world today is so full of horror and fear that it is hard to be strong sometimes.  This book helps put that feeling into words. I am still emotionally reeling from this story.

Annabelle is running across the country, from Seattle to Washington DC to try and get away from the demons that are haunting her, causing her pain, while finding peace in each step.  Following her in an RV is her grandfather, Ed, her brother, Malcolm and her friends, Olivia and Zach.  They form a cheer squad and publicity team.  As she runs, she gains notoriety and as people find out her story, they help her deal with the pain caused by the Taker.  In the way most girls are raised, she is polite to him, nice and he takes advantage of that and goes further in his taking.

To me, it seems that Annabelle is running away from herself, but in each step, she finds herself and becomes stronger.  It really made me think of that cliche, what doesn’t kill you, makes you stronger.  I am not going to ruin the details of the story but it does touch on PTSD, stalking, death and violence.  Now after noting those things, this book isn’t depressing but does fill one with hope and that even taking one step, let alone enough to travel 2700 or so miles, will help quite a few people.  That is probably one of the best things in young adult fiction today is that it can reach people who can’t put their story into word. 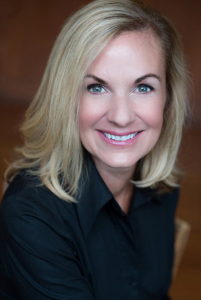 Deb Caletti
is an award-winning author and National Book Award finalist. Her many books for young adults include The Nature of Jade, Stay, The Last Forever, Essential Maps for the Lost, and Honey, Baby Sweetheart, winner of the Washington State Book award, the PNBA Best Book Award, and a finalist for the California Young Reader Medal and the PEN USA Award. Her books for adults include He’s Gone, The Secrets She Keeps, and her most recent release, What’s Become of Her.

Deb grew up in the San Francisco Bay area, and now lives with her family in Seattle.

My glasses. A cup jammed-full of pens.  A few notepads of to-do lists and random notes. My clock.  A lamp.  More pens (Sharpies and Rollerballs), not in the cup where they belong.  On the shelves below: Books, books, books.  Some favorites, and some not yet read.

Michael Chabon.  Anne Tyler.  Barbara Kingsolver.  Anthony Doerr. I was crazy-thrilled to meet Richard Russo. I had to order a signed edition of Hampton Sides’ In the Kingdom of Ice even though I already owned the hardback. My heart beat a little fast when I saw Delores Kearns Goodwin at BEA.  One of my most unforgettable moments was hearing Maya Angelou speak at the NBA Awards. I’ll never, ever forget her voice.  For me, as a writer, it’s less about being a fan, and more about having deep, deep respect and admiration.

Dinner food at breakfast time.  Looking down and seeing what clothing combos I threw on to work in.  Peanut butter in the jam jar. And, okay – grammar snob alert – misuse of “your” and “you’re.”

I go with the flow, but with a general flow already in mind. 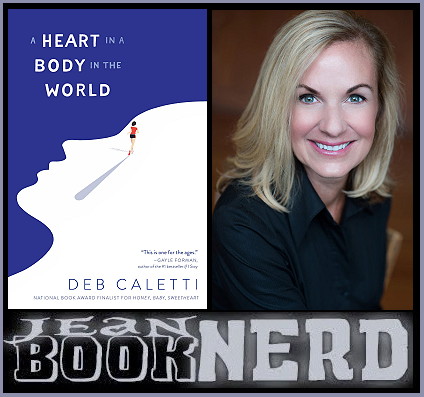 –   5 Winners will receive a Copy of A HEART IN A BODY IN THE WORLD by Deb Caletti. 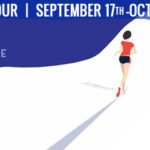