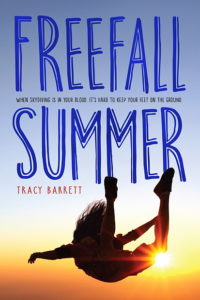 Sixteen-year-old Clancy Edwards has always been “the good girl.” Ever since her mother died in a skydiving accident when Clancy was young, Clancy’s father has watched her like a hawk. Between her dad’s rules and her boyfriend’s protectiveness, she’s longing for an escape this summer. Then she meets Denny.

Denny is a new skydiving student and college freshman. Clancy lets Denny think they’re the same age–and that she’s old enough to make decisions for herself. But the lies snowball, relationships are damaged, and suddenly Clancy isn’t the person she wants to be. If only making choices were as simple as taking a leap out of a plane. Before Clancy can make things right, one last act of rebellion threatens her chance to do so–maybe forever.

BOOK DEPOSITORY
ABOUT THE AUTHOR 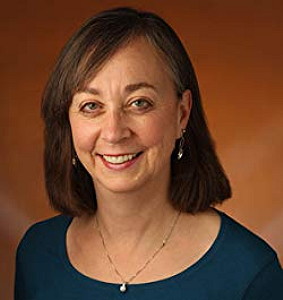 Tracy Barrett has written more than twenty books for children and young adults. She’s much too interested in too many things to stick to one genre, and has published nonfiction as well as historical fiction, mysteries, fantasy, time travel, myth and fairy-tale retellings, and contemporary realistic novels. She knows more about ancient Greece and Rome and the European Middle Ages than anyone really needs to know, can read lots of dead languages, and used to jump out of airplanes.

A grant from the National Endowment for the Humanities to study medieval women writers led to the writing of her first novel, the award-winning

Anna of Byzantium (Delacorte). Her most recent publications are a contemporary YA novel,

Freefall Summer, which draws on her own skydiving adventures; a middle-grade fantasy entitled

Marabel and the Book of Fate;

The Song of Orpheus: The Greatest Greek Myths You Never Heard, a collection of little-known Greek myths; and the popular middle-grade series

Midsouth (Tennessee and Kentucky) with the

Tracy grew up near New York City, and went to college in New England and graduate school in California. She holds a Bachelor’s Degree with honors in Classics-Archaeology from Brown University and an M.A. and Ph.D. in Medieval Italian Literature from the University of California, Berkeley. She was awarded a grant from the National Endowment for the Humanities to study medieval women writers and won the Society of Children’s Book Writers and Illustrators Work-in-Progress Grant in 2005. She taught Italian and other subjects at Vanderbilt University for almost thirty years. She has two grown children and lives in Tennessee with her husband and two Cavalier King Charles Spaniels.

I just got back from a conference where Lois Lowry was one of the keynote speakers, and so now I have autographed copies of Number the Stars and The Giver. I’m re-reading them and I love them even more than I did when they first came out.

So many! I love Judy Blume and Ruta Sepetys and Linda Sue Park, and I’ve lately come to love Ibi Zoboi and Martha Brockenbrough and Kwame Alexander. I could go on and on . . .

The two things that make me cringe about authors who write for teens: When they think that life is the same as when they (the authors) were young (it’s NOT!) and when they think that teens’ issues and problems are simple, and easily solved with a bit of understanding from a caring adult. Yuck.

I definitely go with the flow. I know the beginning and I have a general idea of the ending (although that’s always subject to change), but I usually don’t know how I’m getting there.

I over-use “just,” but I don’t think I love to use it; it just happens (see? I seriously didn’t mean to do that!). Some favorites are deft, murmur, and crystalline. I don’t use them often but I do love it when they fit a situation exactly.

I have lots but will exercise self-restraint and attach only a few!

OMG – LOOK AT THESE FACES! 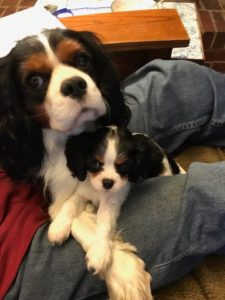 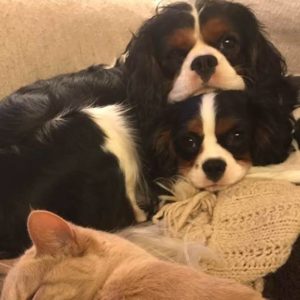 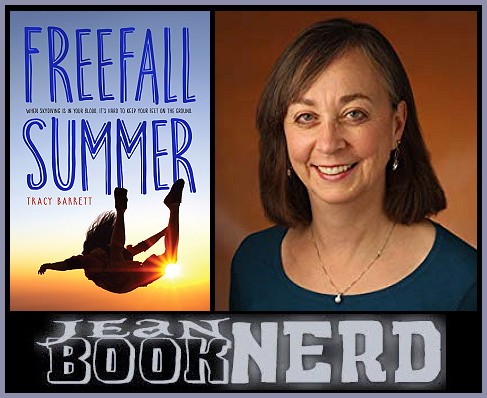 –  1 Winner will receive a Copy of FREEFALL SUMMER and Swags (signed bookplate and a silver skydiving pendant) by Tracy Berrett.