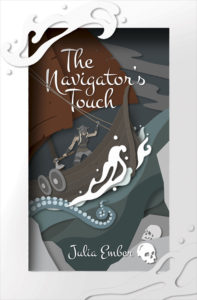 After invaders destroyed her village, murdered her family, and took her prisoner, shield-maiden Ragna is hungry for revenge. A trained warrior, she is ready to fight for her home, but with only a mermaid and a crew of disloyal mercenaries to aid her, Ragna knows she needs new allies. Guided by the magical maps on her skin, battling storms and mutiny, Ragna sets sail across the Northern Sea.

She petitions the Jarl in Skjordal for aid, but despite Ragna’s rank and fighting ability, the Jarl sees only a young girl, too inexperienced to lead, unworthy of help. To prove herself to the Jarl and win her crew’s respect, Ragna undertakes a dangerous expedition. But when forced to decide between her own freedom and the fate of her crew, what will she sacrifice to save what’s left of her home?

Inspired by Norse mythology and J.M. Barrie’s Peter Pan, this companion novel to The Seafarer’s Kiss is a tale of vengeance, valor, honor, and redemption. 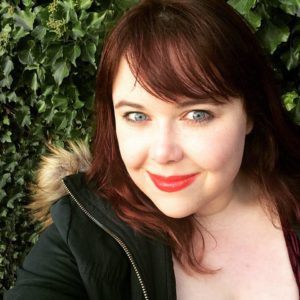 Julia Ember is the author of The Seafarer’s Kiss and The Navigator’s Touch, as well as several novellas and short stories for young adults. Originally from Chicago, Julia now resides in Edinburgh, Scotland. Her hobbies include riding horses, starting far too many craft projects, and looking after her city-based menagerie of pets with names from Harry Potter. She regularly takes part in events for queer teens. A world traveler since childhood, she has now visited more than sixty countries.

An air purifier – I get really bad allergies, especially in the summer, so I have a little portable air cleaner that I keep next to my bed. It really helps me sleep!

An ARC of The Navigator’s Touch – I’m sentimental as hell when it comes to my own books and I like to have it nearby!

My ipad – I am hopelessly addicted to Twitter and have to admit that I check it right before I go to bed, and again when I wake up.

A copy of Because You Love to Hate Me, an anthology of villainy! It’s the book I am currently reading right now, and I am really enjoying it.

I’ve been blessed to meet a lot of the authors I fan over, such as Kate Elliot, Heidi Heilig and VE Schwab, and probably embarrassed myself at all of those encounters. I would still really love to meet JK Rowling, and would probably die afterward. Harry Potter influenced me so much as a kid, and really deepened my love of reading. I have some issues with the ways JKR currently uses her platform, and some of the retconning of diversity into the books, but I can’t deny how powerful her influence was on me!

I’m embarrassed pretty easily and do get imposter syndrome in a lot of professional writer situations! But the thing that makes me cringe the most is witnessing public outbursts. I get really bad second-hand embarrassment when people are shouting at each other or making a scene on public transport. People complaining to waiters or serving staff is also high on my list!

I’m in the middle. I’m not a true pantser, as I usually have sketched out the general flow of my story and put together a rough chapter by chapter outline before I get started. However, I do make up a lot of scenes as I go along, and fill in backstory. I usually have to redraft several times before I have a finished book, because my original process is a little bit chaotic!

I’ve never really thought about it! I like to think I use the words that are appropriate for the situation, scene and character! I do like using gemstone tones to represent color! 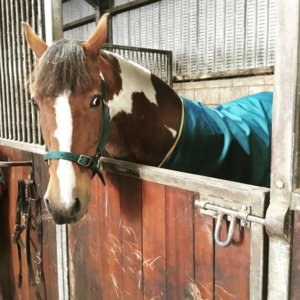 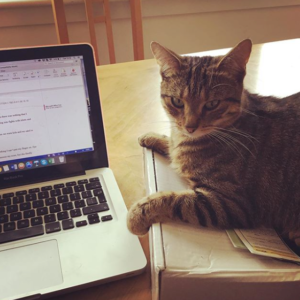 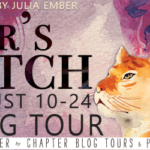