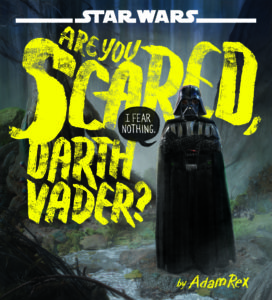 It’s midnight and the moon is full, but Darth Vader isn’t scared.

OF COURSE I AM NOT SCARED.

Nothing can scare Lord Vader!

Not monsters or witches or ghosts, and especially not the dark.

So what is Darth Vader scared of?

Read on in Adam Rex’s hilarious and spooky Star Wars tale to find out!

YOU WILL LEARN NOTHING. 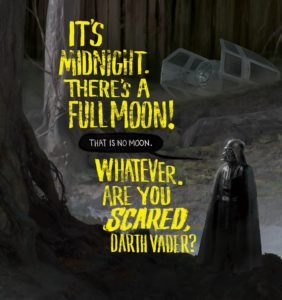 Adam Rex grew up in Phoenix, Arizona, the middle of three children. He was neither the smart one (older brother) or the cute one (younger sister), but he was the one who could draw. He took a lot of art classes as a kid, trying to learn to draw better, and started painting when he was 11. Later he got a BFA from the University of Arizona, and met his physicist wife Marie (who is both the smart and cute one).

Adam and Marie live in Tucson, where Adam draws, paints, writes, spends too much time on the internet, and listens to public radio. Adam is nearsighted, bad at all sports, learning to play the theremin, and usually in need of a shave. He can carry a tune, if you don’t mind the tune getting dropped and stepped on occasionally. He never remembers anyone’s name until he’s heard it at least three times. He likes animals, spacemen, Mexican food, Ethiopian food, monsters, puppets, comic books, 19th century art, skeletons, bugs, and robots.

His first picture book, THE DIRTY COWBOY by Amy Timberlake, was published by FSG in 2003. His picture book FRANKENSTEIN MAKES A SANDWICH, a collection of stories about monsters and their problems, was a New York Times Bestseller. 2007 saw the release of his first novel, THE TRUE MEANING OF SMEKDAY, which was adapted into the DreamWorks film HOME in 2014. He has illustrated the work of many authors, including Jon Scieszka, Mac Barnett, Neil Gaiman, Jeff Kinney, David Lubar, Kate DiCamillo, Eoin Colfer, Christopher Paul Curtis, and Paul Fieg.

Garlic and crosses are useless against Adam. Sunlight has been shown to be at least moderately effective. A silver bullet does the trick. Pretty much any bullet, really.

Giveaway Details:
3 winners will receive a finished copy of ARE YOU SCARED, DARTH VADER?, US Only.