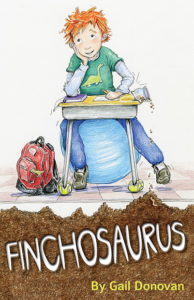 FINCHOSAURUS follows the adventures of Atticus Finch Martin, otherwise known as Finch. Finch’s dream is to uncover a dinosaur fossil and name a new species after himself—until he digs up a note in the fifth-grade class garden with the word HELP on it. He is determined to come to the aid of the mystery note-writer. But when the quest turns out to be harder than expected, Finch risks losing two things that he really wants—his best friend Noah, and a field trip to Dinosaur State Park.

“…If it’s anything like the last (In Memory of Gorfman T. Frog), it’s worth discovering.” ―Elizabeth Bird,School Library Journal

“An amusing, empowering tale that should appeal especially to middle schoolers with abundant energy.” ―Kirkus Reviews

“The book captures the pains and pleasures of being both a twin and a fourth-grader.” —Booklist

“Bailey is emotionally authentic, with an individualistic voice and a strong streak of stubbornness, of which she is particularly proud.” —Publishers Weekly

“Purposeful in a lighthearted way but guaranteed to make your head—scalp and brain—itch!” —Kirkus Reviews

IN MEMORY OF GORFMAN T. FROG
“Middle-graders will celebrate as Josh learns to use his personal “pause” button to stop talking long enough to keep out of trouble. Obvious appeal, particularly to fans of Andrew Clements’s work.” —Kirkus Reviews

Atticus Finch Martin, aka Finch, is a 10-year-old paleontologist or so he thinks.  His main goal in life is discovering a new form of dinosaur that he can name.  Finch has other problems as well, he can’t sit still and bounds with an energy of a typical 10-year-old boy.  The teacher gets creative and helps channel his energy with the use of a ball chair so he can bounce and not annoy those around him.  This really charmed me, a teacher realizing that some kids are just really energetic at this age and need a tiny bit of help rather than constant scolding.  Finch does get some well deserved scolding though.  I also found it wonderful that his older brother, Sam, is a reader like his librarian mother and they both try to kindle the passion in Finch.

Finch is always digging for those dinosaur bones but when he brings a worm to share at show and tell, the worm creates a unique situation where he discovers a note reading “HELP!” As Finch involves his classmates to solving who wrote the note, he finds that there other kids struggling to keep their issues under control much like his fidgeting.  He brings the kids together but in doing so it jeopardizes him finishing his own school projects that might make him forfeit his trip to a dinosaur park and not finish fifth grade.  I really enjoyed how this quick and fun read encourages kids to accept help even when they don’t need it. 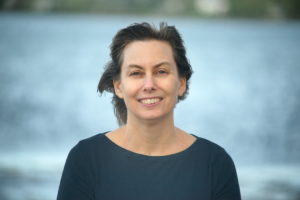 Gail Donovan is the author of the middle-grade novels The Waffler, What’s Bugging Bailey Blecker?, and In Memory of Gorfman T. Frog, which was named a New York Public Library Best Books for Children. She is also an author for the Rainbow Fish & Friends picture book series based on the bestselling books of Marcus Pfister. Donovan, who was born and raised in Connecticut, lives in Maine with her husband and two daughters, where, in addition to writing children’s books, she is a library assistant at the Portland Public Library.

I usually have a book of middle-grade fiction and a “grown-up” book of fiction. Right now, the children’s book is Moo by Sharon Creech and the other one is Three Things About Elsie by Joanne Cannon. My nonfiction reading is usually limited to New Yorker articles, though lately I’ve been reading some books on the craft of writing, such as John Yorke’s Into the Woods: A Five-Act Journey into Story which is a fascinating look at story form using examples from both film and literature.

3.     Do you obsessively plot out each point or just go with the flow?

I start with my main character and an inciting incident that sets up a “what if this particular thing happened to this particular person?” scenario, which I then try to answer. And I usually have an ending image in mind, that I’m writing toward. In trying to reach that image I often map out some guideposts, but it’s far from obsessively plotted.

When I was proofreading Finchosaurus I found that I had used the word “plunked” for “sat,” over and over. I like both the way it sounds, and how it describes the way a kid sits down. They don’t gently lower themselves. They plop down, they drop down, they plunk down. I do like the word, but while some repetition is good, this was a case of repetition that wasn’t helping. It was drawing too much attention to itself. So, some of the plunks had to go. 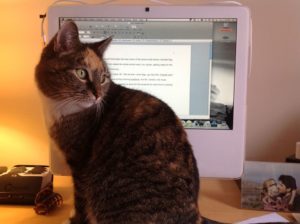 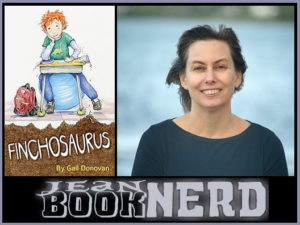 –  10 Winners will receive a Copy of FINCHOSAURUS by Gail Donovan.