by Mari Mancusi
Published by Disney-Hyperion

THE CAMELOT CODE: THE ONCE AND FUTURE GEEK Blog Tour 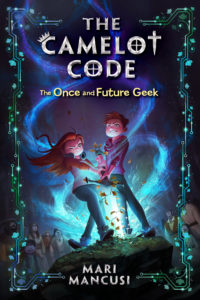 Young King Arthur accidentally time travels to the 21st century and googles himself, discovering the not-so-happily ever after in store for him once he pulls the sword from the stone. He decides he’d much rather stay here–and join the football team instead.

Now modern day gamer geeks Sophie and Stu, with the help of Merlin, find themselves in a race against time to pull a Camelot-size caper–get that sword pulled from the stone and the stubborn once and future king back to the past where he belongs. While Arthur takes on the role of wide-receiver in an attempt to save the football team from a losing season, Sophie and Stu sword-fight, joust, and horseback ride their way through Camelot as they fight to save the timeline. If they fail, the world as they know it (not to mention the existence of pepperoni pizza!) will cease to exist forever.

Arthur watched, enraptured, forgetting he was supposed to be looking for Lucas’s brother. There was nothing more excit­ing than a joust.

The blue knight struck the green and managed to unmount him, and now they were both on the ground, circling each other, armed and ready to strike. Arthur’s heart pounded with excite­ment. The two knights seemed very evenly matched. Who would win?

The knight set down his sword and approached the dais, bowing low to his master. Lord Medieval rose from his throne and declared him victor of the evening. Everyone cheered.

But suddenly, to Arthur’s horror, the green knight rose to his feet, grabbed the discarded sword, and unceremoniously drove it into the blue knight’s back.

Arthur gasped along with the crowd at this display of treach­ery. The blue knight staggered for a moment, his expression shocked and horrified as he fell to the sand.

What had once been a friendly tournament had now become a murder scene. The blue knight’s men took the field, armed with maces, swords, and poles. But the green knight dispatched them quickly—slaying each and every one of them where they stood.

Arthur steamed with fury. The evil knight should not be allowed to get away with this. But what could he do?

It was then he noticed movement from the blue knight. His heart fluttered with excitement: the man was attempting to stag­ger to his feet. Arthur looked around, praying someone would notice and help him—give him a weapon to defend himself before the green knight realized he lived. But no one came. They were all on the field. Dead.

It was up to Arthur. The only trained squire left in the place.

Without regard for his own safety, he jumped the barrier, grabbing the nearest sword from the sidelines and diving onto the field. The green knight turned, a shocked look on his face, but Arthur nimbly dodged him and headed straight for the blue knight. Another knight tried to stop him, but he darted away. Finally he reached the blue knight and thrust the sword in his direction.

“Use this!” he cried, panting heavily from his run. “Defend us from the evil that plagues this hall.”

Arthur waited for the knight to take the sword—to smite his enemy where he stood.

“Dude, what are you doing?” the knight whispered instead.

Arthur cocked his head in confusion. What? He tried again to give the sword to the knight. “Take it. He will kill you otherwise!”

The knight awkwardly took the sword, an uncertain expression on his face. “Um,” he stammered. “Hey, Luke, did George change the choreography and forget to tell me again?” 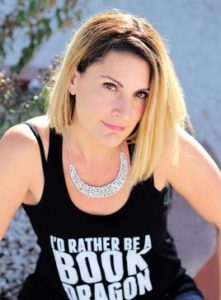 Mari Mancusi always wanted a dragon as a pet. Unfortunately the fire insurance premiums proved a bit too large and her house a bit too small–so she chose to write about them instead. Today she works as an award-winning young adult author and freelance television producer, for which she has won two Emmys.

When not writing about fanciful creatures of myth and legend, Mari enjoys traveling, cosplay, snowboarding, watching cheesy (and scary) horror movies, and her favorite guilty pleasure—playing videogames. A graduate of Boston University, she lives in Austin, Texas with her husband Jacob, daughter Avalon, and their two dogs.

For updates on all Mari’s books, subscribe to her newsletter.

3 Winners will receive a finished copy of THE CAMELOT CODE: THE ONCE AND FUTURE GEEK, US Only.