TWILIGHT OF THE ELVES 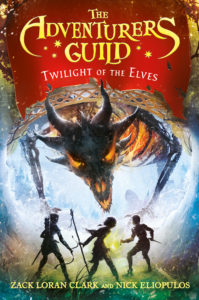 I should probably start at the beginning, Zed wrote, when things first went wrong?

Zed, Brock, and their friends may have saved Freestone from destruction, but the fight against the Dangers is far from over. No one knows what to expect next from the dark power that forced the elves to abandon their city. And the influx of elf refugees in Freestone strains resources and brews resentment among the townspeople. Things have shifted between best friends Zed and Brock, as well, with their friendship crumbling under the weight of the secrets they’re keeping from each other.

When tensions reach an all-time high, Queen Me’Shala, leader of the elves, approaches the Adventurers Guild with a mission. She wants a small group of adventurers to go behind the king’s back on a covert mission to save her city, and Zed, Brock, Liza, Jett, Micah, and their elven friend Fel join the quest. To face a powerful form of magic thought to be extinct, the adventurers will have to learn how to rely on each other and fight harder than ever before.

Don’t miss this second installment of Zack Loran Clark and Nicholas Eliopulos’s Adventurers Guild trilogy, where the stakes are raised, the action is breathless, and the dangers will stop even the bravest of hearts. 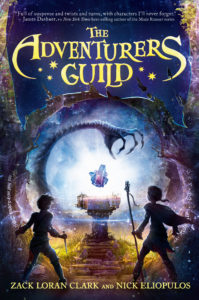 Few ever asked to join the Adventurers Guild . . . Their members often died young.

In one of the last cities standing after the world fell to monsters, best friends Zed Kagari and Brock Dunderfel have high hopes for the future. Zed desperately wishes to join the ranks of the Mages Guild, where his status as Freestone’s only half elf might finally be an asset. Brock, the roguishly charming son of merchants, is confident he’ll be welcomed into the ranks of the Merchants Guild.

But just as it seems the boys’ dreams have come true, their lives take a startling turn . . . and they find themselves members of the perilous Adventurers Guild.

Led by the fearsome Alabasel Frond, the guild acts as the last line of defense against the Dangers-hungry, unnatural beasts from otherworldly planes. And when the boys uncover a conspiracy that threatens all of Freestone, Zed, Brock, and their new allies-including Liza, a fierce noble, and Jett, a brave dwarf-must prove their worth once and for all.

This start of a thrilling new series by talented duo Zack Loran Clark and Nick Eliopulos is sure to be a hit with readers who like their fantasies clever and action-packed, with a dash of snark. 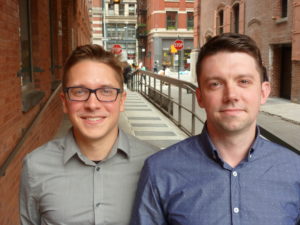 ZACK LORAN CLARK and NICK ELIOPULOS grew up in Florida and now live in New York. Best friends, they get together to play Dungeons & Dragons every week. Zack fervently hopes that magic is real; Nick desperately hopes that monsters are not. The Adventurers Guild is their first novel.

Giveaway Details:
3 winners will receive a finished copy of TWILIGHT OF THE ELVES, US Only. 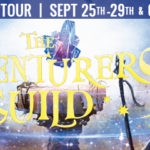