by Eric Dinerstein
Published by Disney-Hyperion

A CIRCLE OF ELEPHANTS 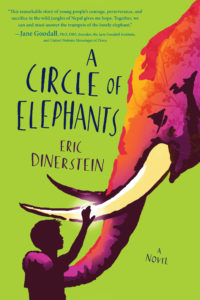 From the author of What Elephants Know, a 2017 ALA Notable Children’s Book and winner of the 2017 South Asia Book Award for Children’s and Young Adult Literature, comes this stunning companion novel about the complex relationship between people and nature coexisting in the Borderlands of 1970s Nepal.

Thirteen-year-old Nandu lives in the newly established Royal Elephant Breeding Center on the edge of the jungle. Here, the King’s elephants are to be raised under the protective watch of the stable. Nandu-along with his adoptive father Subba-sahib, his mentors, friends, and the rest of the elephant drivers-is tested by man and nature as earthquakes, drought, wild herds, and rumors of poachers threaten the Center.

When Nandu’s world is thrown into turmoil, so, too, is the world of Hira Prasad, the Center’s powerful bull elephant. An unbreakable bond of brotherhood drives Nandu and Hira Prasad together as they struggle to maintain the delicate natural order of life in the Borderlands.

Dinerstein’s poetic prose and scientific expertise come together in this breathtaking tale that transports the reader to the center of dangerous conflicts and heartbreaking friendships.

A Circle of Elephants, by Eric Dinerstein

Hira Prashad pushed me into the grassland. I was so confused, I failed to notice the dead silence—no peacocks, wild jungle fowl, or hornbills calling. Only seconds ago they had all been wailing. A nearby herd of spotted deer, over a hundred of them, stopped barking and stood at attention. At first, I thought they were watching the lone wild dog, the dhole, that I saw darting through the clearing. But the deer seemed focused on something else. Hira Prashad sensed it, too. He banged his trunk on the ground and let out a screech I had never heard from an elephant.

“Hira Prashad?!” I yelled. “What do you know that you are not telling me?”

Just as I spoke, every tree around us started to shake. My head nodded up and down, and my arms wiggled left and right. I moved toward my elephant but lost my balance as the earth swayed beneath my feet. I stumbled and fell. Hira Prashad lifted me up and pulled me farther into the grassland. I heard a loud ripping as the place where I had been standing, the entire cliff’s edge, collapsed into the river. Two trees bent over and fell, tearing the ground with their huge roots as they landed. The entire jungle trembled. More of the cliff sheared off and crashed into the river.

Hira Prashad curled his trunk around me and held me to his leg, just as Devi Kali did when I was small. I pressed my face into his rough warm skin, praying to the Goddess of the Forest, the one we call Ban Devi. I pleaded with her to make it end. Instead, another great silk cotton tree went crashing down over the edge. The jungle was caving in around us and no one could stop it.

Anger and shock hung like a storm cloud over the line of six elephants marching to Pradhan’s body. Subba-sahib and Mr. Dhungel were at the lead followed by Ganesh Lal, the game scout. The inquest into Pradhan’s death would be a serious investigation—more serious than if a person had been killed. Rhinos were property of the king. To steal a rhino’s horn was to steal from King Birendra himself.

Vultures circled and swarmed in the sky—an eerie marker of our destination. Vultures or no, it was hard to miss Pradhan lying on his side in the trampled, bloody grass. His armored plates were cut and scarred from recent fights. Wounds that would never heal. The great Pradhan, mayor of the Borderlands, had died at the small hands of men. Tears sprang to my eyes at the sight of my old friend Pradhan. Murdered.

I stifled the scream that choked my throat.

My father climbed off his elephant and knelt down next to Pradhan’s face to examine the bullet holes. “Two shots fired into the skull from close range,” he said to the warden. He turned his body toward the grass thicket nearby. “The poachers must have crawled on their bellies to get this close,” he added. “I see no footprints.”

Mr. Dhungel was busy filling out his official forms, which would be sent directly to the king’s secretary. “Subba-sahib, I am writing that this male was very old,” said the warden. “That is what I will put in my report. And you will confirm this. He probably would not have lived out the year anyway.”

But no excuse could cover up the bullet holes or replace the stolen horn. My father replied with a clear fact: “A horn of that size is worth three million rupees, Warden-sahib.”

Dhungel-sahib winced. Ganesh Lal stared at the ground. When the call was given by the warden, the men lifted their kukhris, the sharp knife every Nepali man carries, over their heads. They were required by law to send the hooves and the skin to Kathmandu. The horn, which was normally sent to the Royal Palace, was probably somewhere in India by now.

I could not bear to look. Who can watch this happen to a member of your family? 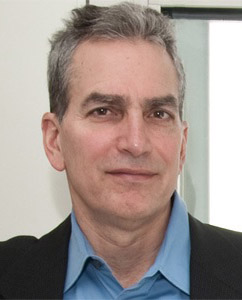 Eric Dinerstein is Director of Biodiversity and Wildlife Solutions at RESOLVE. Previously, he was Lead Scientist and Vice President for Conservation Science at the World Wildlife Fund. His areas of specialty include tropical mammals, large mammal biology, biogeography, bats, rhinos, seed dispersal and community ecology. With the World Wildlife Fund, he led many of the organization’s most important scientific projects, including the Global 200 Ecoregions, examples of which form the basis of his book TIGERLAND AND OTHER UNINTENDED DESTINATIONS. Dinerstein is also the author of THE KINGDOM OF RARITIES, THE RETURN OF THE UNICORNS: The Natural History and Conservation of the Greater One-Horned Rhinoceros and WHAT ELEPHANTS KNOW: A Novel, among other articles and publications.

He attended Northwestern University and Western Washington University, and did his post-graduate studies at the University of Washington (Organization of Tropical Studies) and the National Zoological Park’s Conservation and Research Center.

3 winners will win a finished copy of A CIRCLE OF ELEPHANTS, US Only.