Praise for JINXED[Hutson] creates a gore-filled throwback to the classic teen slasher flick genre … Graphically detailed descriptions make it clear that this work of horror isn’t for the faint of heart. ―Publishers Weekly

Thommy Hutson’s ‘Jinxed’ is a Must Read for Classic Horror Fans (linked to full iHorror review)
“Hutson … knocked it completely out of the park … with an expertly paced, cinematic slasher in a setting that would make Agatha Christie proud.” ―Waylon Jordan, iHorror.com

“…gory but captivating … a masked murderer starts picking off the teens, killing them all in theatrically grisly ways. … entertaining” ―School Library Journal

“Thommy Hutson is the ultimate authority in nostalgia-driven storytelling.” ―Clive Barker, Bestselling Author of Books of Blood and The Thief of Always

“Jinxed is the teen whodunit that Wes Craven and Lois Duncan never made. Hutson has created the best new slasher franchise since Scream.” ―Peter M. Bracke, Author of Crystal Lake Memories: The Complete History of Friday the 13th

“A dark, tension-filled thriller that’s wicked to the very end. Bad luck was never so much fun!” ―Jeffrey Reddick, Creator of Final Destination 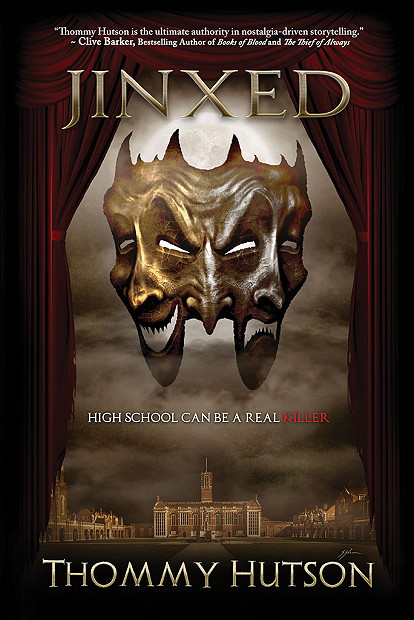 High School Can Be a Real Killer

Break a mirror
Walk under a ladder
Step on a crack

But someone at the secluded Trask Academy of Performing Arts is taking things one deadly step further when the campus is rocked with the deaths of some of its star students.

Layna Curtis, a talented, popular senior, soon realizes that the seemingly random, accidental deaths of her friends aren’t random—or accidents—at all. Someone has taken the childhood games too far, using the idea of superstitions to dispose of their classmates. As Layna tries to convince people of her theory, she uncovers the terrifying notion that each escalating, gruesome murder leads closer to its final victim: her.

Will Layna’s opening night also be her final bow?

You can purchase JINXED at the following Retailers: 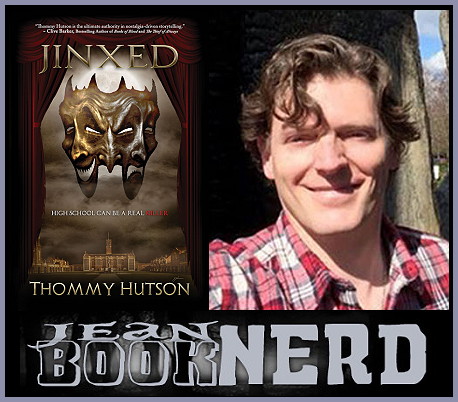 Born and raised in Upstate New York, Thommy Hutson graduated from UCLA and launched his career co-writing the story for the Warner Bros. animated hit SCOOBY-DOO IN WHERE’S MY MUMMY? He followed that with co-writing the concept and additional material for CHILL OUT, SCOOBY-DOO!

His career then took a thrilling turn when he wrote and produced several definitive genre film retrospectives for television and home entertainment: SCREAM: THE INSIDE STORY (Bio Channel), NEVER SLEEP AGAIN: THE ELM STREET LEGACY (Bio Channel), MORE BRAINS! A RETURN TO THE LIVING DEAD (Chiller) and HIS NAME WAS JASON: 30 YEARS OF FRIDAY THE 13th (Starz/Anchor Bay).

He was also a staff writer on Hulu’s daily web series “The Morning After,” a smart, witty, pop culture program aimed at getting viewers up-to-date on the latest entertainment news and celebrity interviews.

Continuing his passion for uncovering the stories behind the story, he went on to produce CRYSTAL LAKE MEMORIES: THE COMPLETE HISTORY OF FRIDAY THE 13th, which is the most comprehensive look at the popular film franchise.

He produced and made his feature directorial debut with THE ID, an independent psychological drama/thriller. Filmmaker Magazine stated it was “a deeply unsettling thriller that’s as moving as it is frightening…with skillful, provocative direction that has echoes of early Polanski.”

Thommy also wrote the screenplay for Syfy Channel’s supernatural horror film TRUTH OR DARE, which was a trending topic on social media the night of its release.

As an author Thommy crafted a limited-edition coffee table book detailing the making and legacy of Wes Craven’s 1984 classic A NIGHTMARE ON ELM STREET. A trade version distributed by Simon & Schuster reached number one in Amazon.com’s Movie History & Criticism category. His latest novel, the teen thriller “Jinxed,” (Vesuvian Media) is the first book of a trilogy and has been called “A must-read for classic horror fans…Inevitable and shocking. Brutal and beautiful. Homage and originality…Hutson could easily take on the mantle as the next Lois Duncan.”

He is currently scripting a film for The Hallmark Channel as well as writing another book that definitively details the history, making, and legacy of another fan-favorite genre film from the 1980s.

A member of the Producers Guild of America and Horror Writers Association, and an aficionado of horror and teen movies from the 80s and 90s, Thommy continues to develop unique, compelling, and provocative projects across multiple genres for film, television, publishing, and home entertainment through his company Hutson Ranch Media.

https://www.instagram.com/thommyhutson/
Rafflecopter Link (Needs to be added on your post)
—Giveaway is open to International. | Must be 13+ to Enter

–  1 Winner will receive a Copy of JINXED by Thommy Hutson.

A lamp. and “Dear Evan Hansen: The Novel.”

3.      What makes you cringe?
The mere thought of chewing on tin foil.

4.      Do you obsessively plot out each point or just go with the flow?
Plot to a certain point, but a lot of go with the flow to connect the dots. I like to see where the characters and story take me.
5.      Is there a word you love to use?
All of them!

*JBN is not responsible for Lost or Damaged Books in your Nerdy Mail Box*
—Giveaway is open to International. | Must be 13+ to Enter

–  1 Winner will receive a Copy of JINXED by Thommy Hutson.