Welcome to the Book Blitz for

Join us in celebrating this week and enter the giveaway at the end of the post!

Kiss him. Don’t fall in love. Break a spell with a kiss. Karina has heard and seen enough weird stuff for this request to sound legit. At 16, Karina has a shot at adventure—and an odd first kiss—when she’s called to Whyland, a kingdom in another dimension, to save a guy she barely knows. Why her? No clue, but she’s happy to help, and kissing Sian isn’t torture, even if he isn’t to be trusted. Karina’s smart enough not to fall in love—or at least to tell herself not to. Once in Whyland, she realizes that risking a broken heart is the smallest of her problems. Chased by dark magic creatures, she joins Sian and heads to a mysterious castle whose secrets might be tied to her own. But when truths are unravelled, Karina will need to step up and stand between an ancient darkness and the kingdom—never mind her heart. This is book 2 in Portals to Whyland series but you can jump straight into it without having read book 1. If you like fantasy and adventure with romance and some humor, give Kissing Magic a try. This novel is recommended for readers 13 and older.

Day was born in Brazil and has always loved to write stories. She has a Master’s in English Literature and lives in Montreal, Canada, with her son. 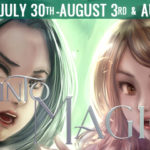