by Scott Wilson
Published by Month 9 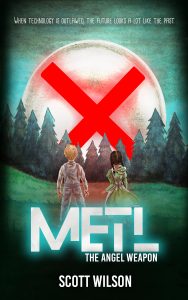 Thirteen-year-old Caden Aire spends his days working in the fields and his nights sleeping in a horse stable, all under the watch of Metl—Earth’s mysterious and artificial second moon, a looming relic of humanity’s lost era.

But Caden’s simple life changes when one night, a fiery red X suddenly appears on Metl’s surface, and the same red Xs start glowing on his palms.

Now Caden must find the only person who knows what’s happening to him, but he doesn’t have much time. Metl has started on an impact course with Earth, and to stop it, Caden will have to face both the unsettling truth about his world … and about himself.

Scott Wilson works as a translator and editor for the Japanese news-entertainment website SoraNews24. He runs ScottWritesStuff, a creative writing livestream on Twitch, and in his free time can be found playing video games and Magic: The Gathering with friends. Metl: The ANGEL Weapon is his first novel. He lives in the Japanese countryside with his wife.

Cover Love (Why you love the cover)

I am completely unashamed to say that I am hopelessly in love with the cover of Metl: The ANGEL Weapon. The illustrator Monika Viktoria did an incredible job with the original drawing, and Danielle Doolittle performed some digital touchup magic to really make it pop with the text.

My favorite part is probably the contrast between old-fashioned main characters Caden and Annika with the massive metallic sphere Metl in the sky. I love how its looks like the red X on Metl is glowing, just like the rest of its shimmering body. Both kids look helpless yet confident at the same time, and you wonder what the heck they’re going to do against this unknown entity.

All the details are great too: the wrinkles on Caden’s overalls, the layer’s to Annika’s dress, and of course the red Xs on Caden’s palms.

I think digitally-created artwork is great, but personally there’s just something special about seeing the cover and knowing that it was originally handcrafted with watercolor and ink.