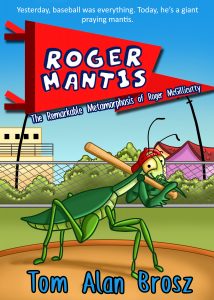 Baseball is Roger McGillicutty’s whole life. That is until he wakes one Saturday to find he is no longer a normal eleven-year-old boy. He’s a five-foot-tall praying mantis.

Roger has school on Monday, the carnival comes to town next week, and his baseball team is poised to play their biggest rival in one week. Being a giant bug will seriously cramp Roger’s style!

To Roger’s surprise, his parents and friends are supportive. Even his dog isn’t spooked. But not everyone’s thrilled about Roger’s change. Some people are frightened and others would like nothing more than to squash him into the ground like the bug he is.

And when Little League officials oust Roger from baseball, his world collapses.

When a reporter from the city comes snooping around rumors of a man-sized baseball-playing praying mantis, Roger must choose between hiding his true self or being the hero he’s always wanted to be. 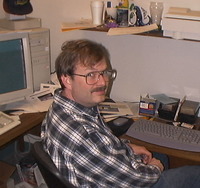 Remotes, a clock, a phone, things like that. As far as reading goes, there’s my Kindle Paperwhite sitting there, which is where most of my reading material is. It contains almost seven hundred books, and I love it.  My other “reading pile” is on the floor next to my bed, and mostly contains comics, graphic novels, newspapers, articles I’ve printed out to read, and those big, illustrated books that don’t work nicely on a Kindle.

What, just one? That’s a tough call. Neil Gaiman would be one. Sadly, many of my favorite authors are no longer with us. I’m really missing Terry Pratchett right now.

Weird noises from my car. Water coming up through my floor where there shouldn’t be. Funny looking stuff on an X-ray.

In the context of writing? When the story moves into an area where you suddenly see a hole in the plot, or the entire thing looks like it might be heading into a dead end. Kind of like when you come around a bend in the road after a long winding drive, and start to see small sections of the road with water flowing over them.

Plotting is one of the hardest parts of writing for me. Coming up with an interesting story line that flows smoothly from one end to the other, along with any subplots. My new book Roger Mantis, is kind of episodic and more linear, so plotting was easier, but I did have to create a timeline. My first book years ago, Castle Falcon, was one of those books with several things going on at the same time, and it was very difficult. At one point, I had big pieces of the book printed out on paper and scattered all over my living room floor, where I would move them around, and even cut them up and tape them back together in different order.

Dialogue is the most fun for me. It flows very smoothly, and is often just a matter of sitting back and watching my characters go at it. When I write dialogue, it goes so rapidly that I usually don’t even do the punctuation as I type it out, and go back to clean it up later.

I have favorites for all occasions. “Pretty much” comes up in conversation a lot. I also wish I had something more elaborate and elegant than what I usually spit out when I hit my thumb with a hammer.

I do have a problem in my writing with favorite terms and phrasings popping up a lot more than I would like. I’ve had to do global searches in some cases to clean this up. This is where editors that aren’t you come in really handy. 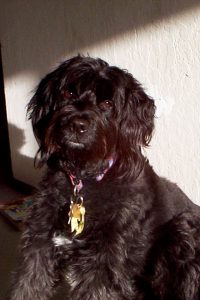 We had one “official” pet for years, a mixed-breed rescue dog, black with a white middle. She was immediately named “Oreo.” The photo shows her in her favorite sunny spot at the top of the stairs. Sadly, she isn’t with us any more.

When our kids still lived here, there were also a number of “unofficial” pets. Among these were rats and mice “rescued” from being snake food, lizards found at a vineyard, and a toad my small daughter picked up from her great-grandmother’s funeral and I smuggled home for her on the airplane in a pocket. Pippin the Rat and Ted the Toad are interred in the back yard under small decorative garden statues of a rat and a toad. Nearby, there is a small statue of a squirrel marking the resting place of a squirrel that my wife hit on the road, and called me up to recover it and give it a decent burial.

And of course, we raised a number of mantises from egg sacks bought at the garden store. Like annual flowers, a mantis normally only lives about one year, and you have to get new ones every spring.

One (1) winner will win a Starbucks Giftcard