“Clever and full of murder, Jodie Lynn Zdrok’s Spectacle had my eyes glued to the pages as the body count rose, and mystery stacked upon mystery as our heroine closed in on a killer who seemed miles ahead of the Parisian authorities. Fans of serial killers and criminal investigations will find much to love, and fascinating passages about morgue tours will appeal to the morbid rubbernecker in us all.” ―Kendare Blake, #1 New York Times bestselling author of the Three Dark Crowns series

“With a fierce heroine, grisly 19th-century murders, and a mystery that left me on the edge of my seat, Spectacle is an immersive, Parisian, YA From Hell that I absolutely devoured!” ―Gretchen McNeil, author of Ten and #MurderTrending

“Zdrok explores the universal fascination with death, set among the darker corners of 1887 Paris, and the very idea of the morgue viewings (to which parents brought their children) is chilling…Grisly, plot driven―and very creepy. Fans of historical thrillers that invoke the enduring spirit of Jack the Ripper will have fun.” ―Kirkus Reviews

“Hints of the murderer’s identity are subtly and intriguingly folded into the story, and unresolved plot threads pave the way for future cases, during which Nathalie can discover more about her powers. The blend of history, mystery, and fantasy makes this debut novel a good pick for fans of Libba Bray’s Diviners series or William Ritter’s Jackaby books.” ―Booklist

“The book seamlessly brings several threads together: the mystery of the murder and the horrors of the killings themselves; the beauty, bustle, and darkness of nineteenth-century Paris (the killer’s pursuit of Nathalie through the catacombs is thrillingly described); the bizarre but historically based practices of morgue viewing and blood transfusions for magic; and the destructive nature of family secrets and their generational effects. …the tension amps up to a gasp-worthy climax.” ―Bulletin of the Center for Children’s Books

“Zdrok has concocted an ambitious Victorian-era story. …Intricately plotted, the story’s pace burns slow before racing ahead to set up and topple assumptions about the true identity of the Dark Artist.” ―School Library Journal 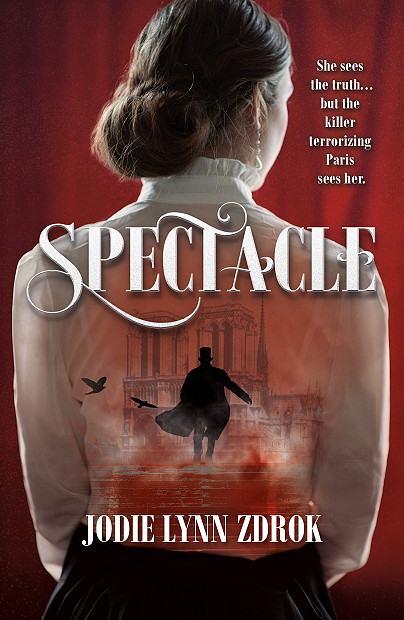 A YA murder mystery in which a young reporter must use her supernatural visions to help track down a killer targeting the young women of Paris.

Sixteen-year-old Nathalie Baudin writes the daily morgue column for Le Petit Journal. Her job is to summarize each day’s new arrivals, a task she finds both fascinating and routine. That is, until the day she has a vision of the newest body, a young woman, being murdered–from the perspective of the murderer himself.

When the body of another woman is retrieved from the Seine days later, Paris begins to buzz with rumors that this victim may not be the last. Nathalie’s search for answers sends her down a long, twisty road involving her mentally ill aunt, a brilliant but deluded scientist, and eventually into the Parisian Catacombs. As the killer continues to haunt the streets of Paris, it becomes clear that Nathalie’s strange new ability may make her the only one who can discover the killer’s identity–and she’ll have to do it before she becomes a target herself.

You can purchase Spectacle at the following Retailers:

I was not expecting this!  I thought this was just going to be a historical mystery based on a serial killer, much like Jack the Ripper but in Paris.  Nathalie wants to be a journalist, something that might be out of reach for most sixteen-year-olds but she has an innate sense about the darkness and death.  She writes a column in the local paper about the unclaimed bodies in the local morgue.  The mory descriptive she is the more people like her writing.  When she views a body more slashed than whole, things get strange. As she touches the glass, she can glimpse into how this person died.  She is hottified with what she now sees.
Normally, I try to guess what will happen next but this one had me fooled.  I thought I knew where it was going, but NOPE, wrong.  This was seriously creepy but in a good sort of way.  The way Zdrok weaves her way around Paris makes everything so much more real.  Oh and the morgue viewings? There actually were outings for families that drew crowds.  It was nicely told with a nod to Nathalie’s abilities with the known science of the day. 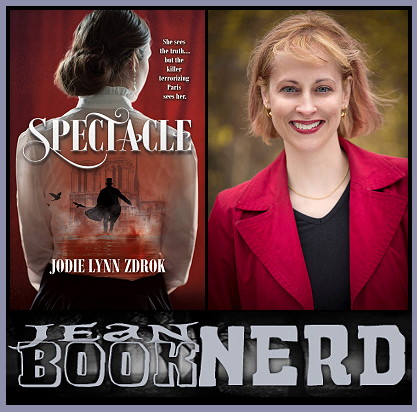 Jodie Lynn Zdrok holds two MAs in European History (Providence College, Brown University) and an MBA (Clark University). In addition to being an author, she’s a marketing professional, a freelancer, and an unapologetic Boston sports fan. She enjoys traveling, being a foodie, doing sprint triathlons, and enabling cats. She is represented by Ginger Clark of Curtis Brown, Ltd.

The Waking Forest by Alyssa Wees, Death Prefers Blondes by Caleb Roehrig, and some research books on the 1889 Paris Exposition Universelle and French cultural history for my sequel.

When people don’t exercise tact and approach a situation or conversation in a way that makes things worse instead of better. Similarly, I find it cringeworthy when people lack self-awareness and say or do something in an effort to make themselves look more in-the-know than they really are…but it ends up having the opposite effect.

Spectacle went through a lot of iterations—it wasn’t originally such a plot-twisty thriller—and the first draft was more go with the flow. For the sequel and for my next project after that (a standalone ghost story set in a 1920s boarding school), I’m plotting the major elements and pantsing the details and minor scenes linking them.

I have a whole list of words I worry about overusing, and then I run a search for them during the copyedit phase! Words I like but can really only use once or twice in a novel: myriad, exuberance, and macabre. And with regard to sports, my favorite word is the German Schadenfreude, which we don’t have an equivalent for in English but that means “joy through other people’s misery.” I can often be found tweeting that about rival sports teams’ losses. (Is that terrible? Sorry. I’m a Boston sports fan. It’s a thing.)

Oh, I love this! When I began writing Spectacle, I had four cats—and sadly, three of four have passed, with only the gray tuxedo cat still with me. Each one makes an appearance in Spectacle. You can see which one was the inspiration for Stanley!

[Not sure if captions are needed, but: orange, Bimbek; white, Stasiu Kitty; black and white, Max; gray and white, Minnie] 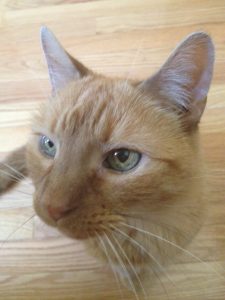 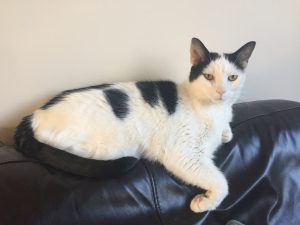 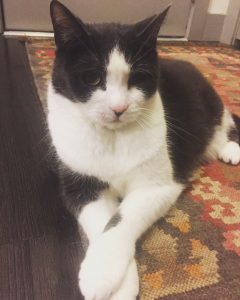 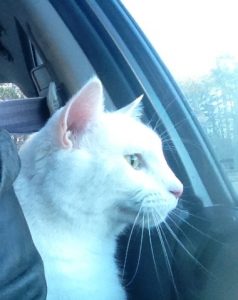 –  5 Winners will receive a Copy of SPECTACLE by Jodie Lynn Zdrok.