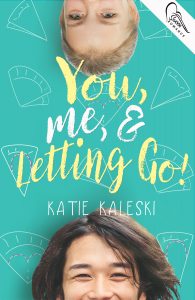 YOU, ME, & LETTING GO by Katie Kaleski
Publication Date: May 14, 2019
Publisher: Swoon Romance

Van Sato’s got labels. Tourettes, ADHD, SPD – words that have defined his existence since the time he was old enough to know what they meant. Now, Van wants to prove he’s more than an acronym, a syndrome, a problem kid. He takes a summer job as a day camp counselor to prove he’s capable of independence and moving on to the next phase in his life. Maybe, he might even make a friend while there. Someone who’s got just as many or even more labels than him. Someone who understands what it’s like.

Tabby Dubanowksi wants to forget about everything, the hospitalization, the judgment, the whispers behind her back. As a camp counselor, she will be admired, looked up to, and able to help people who don’t know anything about her old life. Tabby wants a fresh start and a chance to re-ignite her passion for film-making, if only for one summer.

After running away from their pasts, Van and Tabby collide in a storm cloud of attraction laced with self-doubt, insecurity, shame, and blame. Now, with Van feeling like he might have to quit his job, and Tabby struggling to quell the urge to cut, they will struggle to find themselves in a world designed to keep them apart.

Later, the new Tabby, got to experience some vomit. Oh, so much vomit. I didn’t realize it was humanly possible for so much to come out of one small child, and it wouldn’t stop; it just kept pouring out.

“Huahhh.” Everybody in the whole park probably could’ve heard James barf because he made that huahhh sound quite loudly. He had his hands on his knees, his head bent over them, and his eyes were wide like he couldn’t believe what came out of him.

“Ewww,” said all the other kids. Most of them stood close and observed as James hurled in the middle of the basketball court. I didn’t have all their names memorized yet, but James’ name seared itself on my brain.

“Oh my gosh, that’s what he ate for lunch,” one of my campers named Darla said. Darla wore her curly hair in pigtails and had the cutest button nose. Her eyes were wide too, but hers contained excitement. I looked at the barf, definitely James’ lunch. I could distinctly see his cantaloupe.

“Okay, back, back, everyone,” I said, rubbing James on the back. He was a skinny kid, and I could feel his knobby spine poke through his shirt. His dark-brown hair blew around as the wind picked up, making me turn my head because the wind did nothing for the pungent smell—gross. “Chloe,” I called. She was one of the junior counselors, and I planned on having her take James to the bathroom to wash up. I’d take care of the barf. Chloe ran over, her black ponytail swinging behind her, wearing the camp shirt all employees had to wear every day to work—campers only had to wear them on field trips and special event days—and a name tag on her chest.

“Can you take care of James please and have Belinda contact his mom?” I tugged down the legs of my shorts.

“Sure thing.” She took James by the hand, ignoring the fact that he just wiped his vomit-covered mouth with his hand before she took it in hers. My other nine campers stood around plugging their noses and studying the pile of grossness in front of us. For a moment, I considered the barf as inspiration for a video. I knew then that I needed to come up with something and soon. What Makes Kids Hurl as the title of the piece for my portfolio would more than likely result in instant rejection from the colleges I applied to. I still had several months before the application deadlines, but I needed to get a start on things. At the rate I went, I would’ve been lucky if I even had an idea by then. 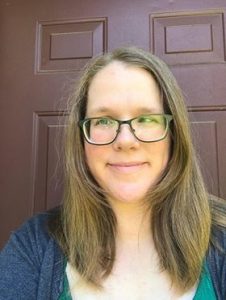 Katie Kaleski has started down many career paths and held many jobs—indie craft store clerk, pizza maker, photo developer, shoe salesperson and cashier, dental assistant in the army, daycare teacher, student teacher—but her favorite one by far is being a writer.

She’s originally from Chicago, so she says things like pop, gym shoes, and front room. Her favorite food
group is sugar, and she loves writing young adult novels.