Shipwreckers: The Curse of the Cursed Temple of Curses - or - We Nearly Died. A Lot. by Scott D. Peterson, Joshua Pruett
ISBN: 136800847X
Published by Disney-Hyperion on May 21, 2019
Pages: 336
Format: Hardcover
Source: Publisher
Goodreads 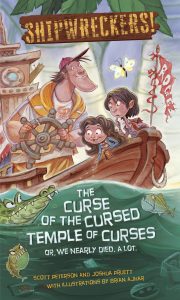 When Dani and her big brother Mike find themselves aboard the ill-fated river expedition of careless adventurer, Captain Kevin, they must work together to save themselves and the captain from all manner of deadly trials and traps.

Complete with treacherous temples, ancient idols, and plenty of explosions, Shipwreckers is a big adventure that brings humor along for a dangerous and thrilling ride up the Amazon. In a place where laughter meets non-stop action, you’ll find Shipwreckers and its cast of soon-to-be fan-favorite characters.

Mike and his little sister Dani find themselves on an expedition with Captin Kevin who loves puns and doesn’t always plan properly.  Mike would rather be reading about adventure than being part of one, while Dani wants to explore everything and anything.  He seems to have his hands full just trying to keep Dani safe.  As they get dragged into Kevin’s treasure hunting in the Amazon, they get detoured by Aruna, a waitress with a secret, snapping caimans and Captain Kevin himself.

This book is so much fun!  Full of puns, adventure, a book-loving main character and a story that reads like a film.  This story will appeal to middle-graders (especially boys) and it shows that boys can be bookworms while little sisters can be action-adventure heroes breaking stereotypes all the way around.  There better be a sequel to this one! 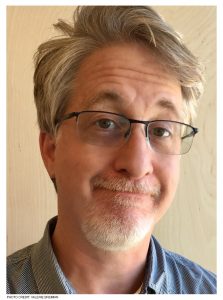 Scott Peterson (aka Scott David Peterson) is currently the Executive Producer and Showrunner of the upcoming Netflix animated series, “The Last Kids on Earth.”

Scott was nominated for a primetime Emmy Award for Outstanding Animated Program for writing Nickelodeon’s “Escape from Cluster Prime” and for an episode of Disney’s “Phineas and Ferb.”

He has worked as a writer for Warner Brothers, Universal Studios, Cartoon Network, and Nickelodeon, among others, for the last decade. Most recently, Scott has been a story editor for Disney TV Animation on “Milo Murphy’s Law,” “Phineas and Ferb,” “Kick Buttowski,” “The Replacements,” and “Emperor’s New School.” He has also written for such series as “Brandy and Mr. Whiskers,” “Danny Phantom,” “The X’s,” “Robotboy,” “Tutenstein,” and “Pet Aliens.” Oh, and “The Sylvester and Tweety Mysteries.” Remember that one?

Scott is also the author of many top-selling children’s books including “Phineas and Ferb’s Guide to Life,” “Agent P’s Guide to Fighting Evil,” and “The Book of Doof.” He recently co-authored his first novelization of the recently released Disney live-action feature of “The Jungle Book” and signed with Disney Hyperion to write his original middle-grade novel “Shipwreckers” with writing partner Joshua Pruett. He also pens multi-page comics for Nickelodeon and Disney.

He lives in South Pasadena with his beautiful wife and two occasionally adorable children. 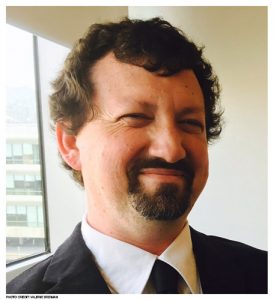 Joshua Pruett is a Primetime Emmy Nominated writer and human-author-person who splits his time unevenly between Gallifrey and Los Angeles with his incredible Wife/High School Sweetheart/Knitter/Singer Amanda and their boy and girl-shaped children. He is currently living out a dream come true, writing dialogue for Weird Al Yankovic’s mouth on Disney XD’s MILO MURPHY’S LAW (2016).

As a Writer/Artist, Joshua has over a decade of experience inflicting laughter on others, with credits on the history making Kickstarter relaunch of MYSTERY SCIENCE THEATER 3000 (coming to Netflix in early 2017), PHINEAS AND FERB, and the HOW TO TRAIN YOUR DRAGON franchise. He has worked as a storyboard artist, writer and creative consultant for Disney TV, DreamWorks Feature Animation, Nickelodeon, DreamWorks TV, Awesomeness TV, Sprout/NBC Universal, Disney China/Beijing, Zombie Bake Shop, Netflix and Paramount Feature Animation. Most recently, he developed THE HAUNTED MANSION for Disney TV with his friend and writing partner, Scott Peterson.

His first novel, THE JUNGLE BOOK: THE STRENGTH OF THE WOLF IS THE PACK, with Scott Peterson, adapts the 2016 live action feature film into a fun for all ages novel for young readers.

Joshua is also internet famous for getting a WIN on failblog (just type “EPIC WIN DAD” into Google Image search — he and his daughter’s award-winning Halloween costume is the first photo to come up).

3 Winners will receive a finished copy of SHIPWRECKERS, US Only.