ONCE AN ALIEN Blog Tour 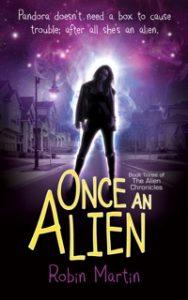 One super intelligent, super hot alien Zoe can handle, after all she loves Rion. But two spells trouble, especially when it’s Pandora. This sassy alien has one agenda, to have as much fun as she can before her people realise she’s gone rogue and materialised in human form. Pandora charms students and teachers alike as she parties her way through the term, but still aces her studies. Even Rion is influenced by her as she challenges his beliefs, and he begins to question whether he is still more alien than human. He and Zoe are finally together, but Zoe wonders for how long. She has other worries too, especially about her mother’s health. Everything is changing in this final year of high school. But even though Zoe is crazy about Rion, can their new relationship last not only the ups and downs of human problems, but alien ones too? 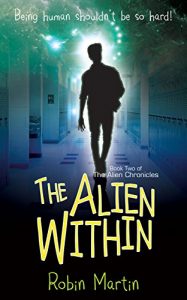 Rion has a secret that only Zoe knows. If only she could remember. But he won’t tell her because, well…who wants to be with a 4000 year old alien? Even if he does look seventeen. When his totally unsuitable guardian, Archimedes, forces him to return to East Valley High, he can’t help but hope the bond between them is still there. Will Zoe learn to like the human he has become? Yet nothing goes the way he hopes, especially when Harry Crosby turns up and starts turning heads. Maybe even Zoe’s? And then there’s Jas, who makes it clear she still likes Rion and will stop at nothing to convince him they belong together. As if. Rion’s heart still belongs to the one person who seems to have forgotten the connection they once shared. High school, relationships, and dealing with embarrassing ‘Uncle’ Archimedes cause him more problems than working out what’s at the bottom of a black hole. Who knew that being human would be so hard? 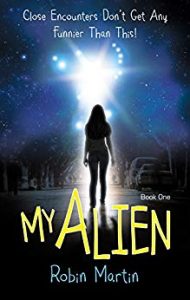 Zoe Brennan has everything sorted. Finally, she’s good friends with the ultra cool Jas and part of her popular group. She even has plans to make new boy, Chad Everett, fall for her. But on one disastrous day at the beach all that changes when she encounters Rion, an extremely annoying alien who informs her they are connected – for life. Bossy and egotistical, he has no hesitation in telling her that exercise, studying and green tea should take precedence over boys, parties and fast food. Like that was ever going to fly. But the trouble really starts when he turns up at East Valley High. Students, teachers and parents alike fall under his spell. Only Zoe knows his secret and even if she told her friends, no one would believe her. What is she going to do about her alien? ‘My Alien’ is a humorous, yet touching YA book about two beings from different worlds who, despite everything, not only learn about each other but also about themselves. 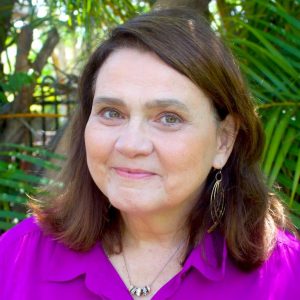 Robin Martin Thomas is an author and teacher, who writes both adult and young adult romance. Her latest exciting YA Sci-Fi romance series ‘The Alien Chronicles’ is in stores now.

A member of the Romance Writers of Australia and Write-Links, for children’s and YA writers, Robin also connects with writers and readers on her Facebook page. Her books are available online at all major retailers and in selected bookstores in Queensland, Australia.

I have a lot of ‘to read’ books on my nightstand (and in the reading basket beside my bed). Some of them are by authors I know personally, and others are books by some of my favourite authors. I love YA and books that combine love and humour. But, in general, I just love books that tell a good story. I’m currently reading a regency romance novel, Captive of Sin, by Australian author, Anna Campbell. Other books include The Fault in our Stars by John Green, which I can’t believe I haven’t read before now, and Wonder by R J Palacio. I’m really looking forward to that one, because my grade nines are studying it. A local author, who also suffers from a similar condition as the main character, August, is visiting the class in a few weeks to talk about the importance of valuing and accepting diversity. Other items beside my bed are old favourites such as John Mortimer’s Rumpole of the Bailey, Anne of Green Gables by L M Montgomery, and my worn out copy of Pride and Prejudice. My biggest problem is too many books, not enough time!

Where do I start? I really love nineteenth century literature such as Jane Eyre, Wuthering Heights, and anything by Jane Austen. But, I’d have to say if there was any author I would totally fan, it would have to be Austen. I think she has written about issues that are still relevant today – dysfunctional families, love, money, snobbery etc. She also looks at these things from a female perspective, which was unique at that time. She writes about women’s position in society and the decisions they have to make when it comes to heart versus head and security versus freedom. However, she does so with a light hand and humour. Who couldn’t laugh at Mr Collins, or laugh with Mr Bennett? His insights into other people, as well as himself, were priceless. I love this quote, “I am heartily ashamed of myself, Lizzy. But don’t despair, it’ll pass; and no doubt more quickly than it should.” I also love the fiercely independent nature of Austen’s heroines, who challenge the norms at times. They are not always perfect, but we always end up loving them – as do their heroes! So yes, Jane Austen, I’m so in her fan club!

If we are talking about books, I really don’t like characters, particularly young women, who are portrayed as victims who never fight back, or who are so self-sacrificing in love that they forget to put a value on themselves. They might start out that way, but they should never end that way. I try to write characters who may have flaws, but who develop a sense of their own worth. Lou, one of my secondary characters in Once an Alien, tries to change herself for her first boyfriend, Mike. When he dumps her, she realises her mistake and decides that any boy she goes out with in future will have to accept her the way she is. And even, Rion, who has given up a lot to be with Zoe, makes the conscious decision to become human because he wants to experience life first hand rather than through the lives of his hosts. It isn’t just about Zoe.

In life, what makes me cringe are people who are name droppers or who constantly talk about themselves. It might be fun to write about people like that (Archimedes comes to mind), but in life they are best avoided!

I usually have a beginning and an end in my mind before I start, as well as a loose idea of what happens in between. One of the most important things for me is to get the voice right because that sets the tone of the whole book. Zoe and Rion had their own unique voices right from the start, and that helped to determine the direction of the books in the series. As for Pandora, she just wrote her own script and only allowed me to make minor changes! But, I don’t plot out the book in great detail, because when I do, I find I lose some of the spontaneity.

Every author has pet phrases, and overusing them can be a problem. Because I usually write in first person and from a YA perspective, I often use words like  ‘sigh’ or ‘totally’. I also have a feeling I might have used ‘awesome’ more than once! Other words I love to use are ones that tumble over your tongue like ‘catastrophic’, ‘cascading’ or ‘preposterous’. I’ve put some of those words into the many lectures from Archimedes, who is not one of my most self aware characters. I’m sure I have other words I use a lot that I don’t even realise. Thankfully, pointing them out is one of the many great things editors do! 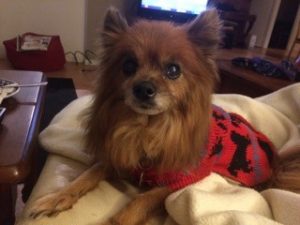 1 lucky winner will receive an ebook of Once An Alien or My Alien, International.