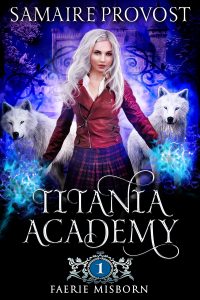 Called into the headmistress’s office on the first day.

Freezing cold winters, constant hunger: This was the life of a homeless orphan. This was my life. Then I got the letter.

I’ve been on the streets since I was born. It got very rough after my aunt got sick and died. But I made do.

The streets of New York city can very unforgiving, especially when times get desperate. Like in winter.

At least I never had to worry about the cold.

But then I got hurt. Things were looking very bad.

Then Chance showed up with the letter.

The letter that said I was misborn of the fae. A bastard, but the magic still counted.

The letter that said I’d been accepted into Titania’s Academy.

When the magic blood of the fae runs through your veins, they will find you, no matter what.

So I get to the school. The Faerie Academy Chance said was soooo great. And before I even step one toe on the ground, these girls are doing double takes and giggling behind their backs at me and I just want to plant my fist in their faces.

Then I get upstairs to my dorm room and find some Barbie doll is bullying a girl.

Then she mouths off at me, giving me attitude.

Well, that was it. I couldn’t hold back.

I punched her. Yeah, I did it.

Called into the headmistress’s office on the first day.

“HEY! COME BACK HERE!” The shopkeeper shook his fist at me as I ran. “THIEF!”

I was thirteen years old, skinny as a rail, and small for my size.

So I was fast. Really fast. I could run like the wind, even while carrying the two loaves of bread.

I heard a police whistle behind me, but I didn’t stop to look.

If you stop to look, they catch you.

I raced down the alleyway, stuffing the bread into the sack hanging from my shoulder as I ran.They were hot on my heels; I could hear them breathing behind me.

More like puffing. Fat old man, you can’t catch me.

I reached the end of the alley, and leaped, catching the top of the dumpster with both hands and swinging my feet up. Scrambling to the back edge, I jumped up and caught the side of the second-floor fire escape, and swung myself over the eight-foot-high chain-link fence to the next alley.

This alley led away from the street where I’d just swiped the bread, the deli that had the table on the sidewalk full of just-baked bread, to tantalize people with the smell and lure them inside. The soup they were then sold was gross. I’d seen a rat fall into the vat last month, and the gross thing was, so did the cook. He hadn’t fished the thing out; he’d left it in. I guess he figured, “more meat for the soup.”

I didn’t eat rat. Aunt Clare always told me they carried disease and to avoid them. We’d been lucky: We hadn’t had to eat rat yet. Though things had gotten lean in the last year. Aunt Clare had gotten older, and she didn’t really gather food anymore.

That was up to me. And I was good at it. She’d taught me well, after all.

But it was still hard.

“Being skinny will help you, Holly,” Aunt Clare had said. “You can run faster, you can squeeze through gaps in fences better, and you can jump farther. Sometimes jumping rooftops is the only thing that’ll get you away from the coppers, and it’ll save your hide. So stay thin and lean and live to read another day.”

Aunt Clare love to read. She had two books she kept guarded and read to me most nights.She’d taught me to read from those books.

I ran down the alley, my feet padding the ground noiselessly in my sneakers.

Aunt Clare had procured the canvas sneakers one night six months ago, and they were already

“I am a weed, Aunt Clare,” I said ruefully, trying to brush out my wild hair with my fingers.

My hair was kind of white, at least after I went swimming in the canal. Most days it was grey, and wild. An untamed mess of tangles, Aunt Clare called it.

It flew behind me when I ran, a white/grey silvery beacon, and helped the coppers spot me in a crowd. It was not an asset, let me put it this way.

I wore a brown hoodie, the hood covering my head of crazy platinum hair, the drawstrings tied snugly under my chin. It helped to hide me in a crowd, and in dark alleyways.

I turned and ran down a sidewalk, slowing as I approached a crowd.

Slipping in through the edges, I lost myself in the throng of people walking, and I disappeared.

New York City was a great place to live if you were homeless, Aunt Clare had always said. Whenever she would say that, I wondered why she didn’t mention the winters, which were cold as ice, the rats, which managed to get in everywhere, and the dangers.

Dangers of being grabbed by coppers.

Dangers of being robbed by the others who shared the streets with you.

Dangers of getting sick.

Dangers of getting stabbed. 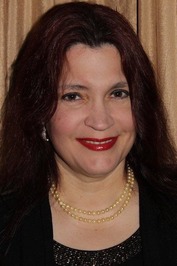 Samaire Provost grew up in a lot of different places, and now happily resides on the East Coast of America, laboring away at writing stories every day. She is an animal lover with far too many pets, yet she still muses how she’d like to add even more. A lover of all things night and gothic, she also loves to read and reread her favorite books. Owned by a cat named Tyrion, she can be found haunting the shadows and mists that hang low over the hills of southern Virginia.