by Shannon Messenger
Published by Aladdin

I am thrilled to be hosting a stop on
the blog tour for LEGACY by Shannon Messenger! I am spotlighting the whole
series today check it out and enter to win the giveaway below!
About the Book: 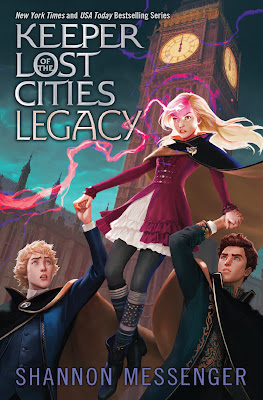 Title: LEGACY (Keeper
of the Lost Cities #8)
Author: Shannon Messenger
Pub.
Date: November
5, 2019
Publisher: Aladdin
Formats: Hardcover, eBook
Pages: 816
Find
it: Goodreads, Amazon, Kindle, B&N, iBooks, Kobo, TBD
Illusions
shatter—and Sophie and her friends face impossible choices—in this astonishing
eighth book in the New York Times and USA TODAY bestselling
Keeper of the Lost Cities series.
Only
this first edition includes an exclusive extra scene from Tam’s point of view
as well as beautiful illustrated endpapers from Shannon Messenger.
Sophie
Foster wants answers. But after a lifetime of lies, sometimes the truth is the
most dangerous discovery. Even the smallest secret comes with terrifying new
responsibilities.
And
Sophie’s not the only one with blank spots in her past, or mysteries
surrounding her family. She and her friends are part of something much bigger
than they imagined—and their roles have already been chosen for them.
Every
clue drags them deeper into the conspiracy. Every memory forces them to
question everything—especially one another. And the harder they fight, the more
the lines blur between friend and enemy.
About the series: 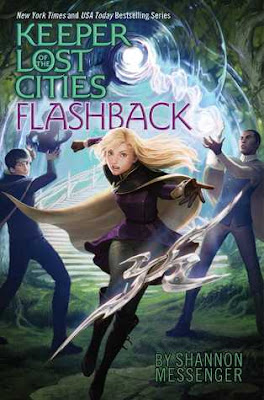 Title: FLASHBACK  (Keeper of the Lost Cities #7)
Author: Shannon Messenger
Pub. Date: November 6, 2018
Publisher: Aladdin
Formats: Hardcover, Paperback, eBook, Audiobook
Pages: 848
Find it: Goodreads, Amazon, Kindle, Audible, B&N, iBooks, Kobo, TBD
A New York Times bestselling series
A USA TODAY bestselling series
A California Young Reader Medal–winning series
In this unforgettable seventh book in the Keeper of the Lost
Cities series, Sophie must let the past and present blur together, because the
deadliest secrets are always the ones that get erased.
Sophie Foster doesn’t know what—or whom—to believe. And in a game
with this many players, the worst mistake can be focusing on the wrong threat.
But when the Neverseen prove that Sophie’s far more vulnerable
than she ever imagined, she realizes it’s time to change the rules. Her
powerful abilities can only protect her so far. To face down ruthless enemies,
she must learn to fight.
Unfortunately, battle training can’t help a beloved friend who’s
facing a whole different danger—where the only solution involves one of the
biggest risks Sophie and her friends have ever taken. And the distraction might
be exactly what the villains have been waiting for. 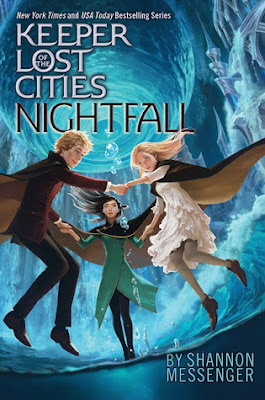 Title: NIGHTFALL (Keeper of the Lost
Cities #6)
Author: Shannon Messenger
Pub. Date: November 7, 2017
Publisher: Aladdin
Formats: Hardcover, Paperback, eBook, Audiobook
Pages: 576
Find it: Goodreads, Amazon, Kindle, Audible, B&N, iBooks, Kobo, TBD
Sophie Foster is struggling.
Grieving. Scrambling. But she knows one thing: she will not be defeated.
The Neverseen have had their
victories—but the battle is far from over. It’s time to change tactics. Make
sacrifices. Reexamine everything. Maybe even time for Sophie to trust her
enemies.
All paths lead to Nightfall—an
ominous door to an even more ominous place—and Sophie and her friends strike a
dangerous bargain to get there. But nothing can prepare them for what they
discover. The problems they’re facing stretch deep into their history. And with
time running out, and mistakes catching up with them, Sophie and her allies
must join forces in ways they never have before. 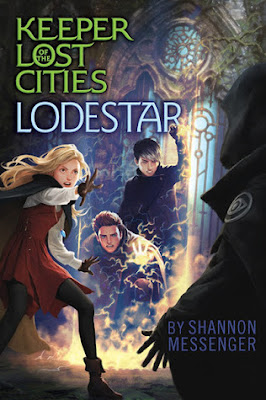 Title: LODESTAR (Keeper of the Lost Cities
#5)
Author: Shannon Messenger
Pub. Date: November 1, 2016
Publisher: Aladdin
Formats: Hardcover, Paperback, eBook, Audiobook
Pages: 688
Find it: Goodreads, Amazon, Kindle, Audible, B&N, iBooks, Kobo, TBD
Dark schemes unfold–and Sophie’s
loyalty is pushed to the limit–in this thrilling fifth book in the
best-selling KEEPER OF THE LOST CITIES SERIES.
Sophie Foster is back in the Lost
Cities–but the Lost Cities have changed. The threat of war hangs heavy over
her glittering world, and the Neverseen are wreaking havoc.
The lines between friend and enemy
have blurred, and Sophie is unsure whom to trust. But when she’s warned that
the people she loves most will be the next victims, she knows she has to act.
A mysterious symbol could be the
key–if only she knew how to translate it. Every new clue seems to lead deeper
into her world’s underbelly and the Black Swan aren’t the only ones who have
plans. The Neverseen have their own Initiative, and if Sophie doesn’t stop it,
they might finally have the ultimate means to control her. 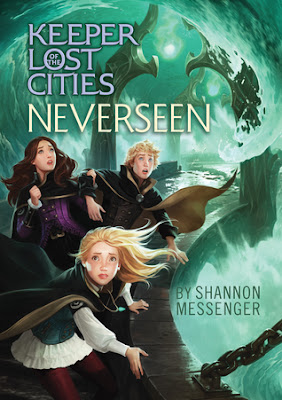 Title: NEVERSEEN (Keeper of the Lost
Cities #4)
Author: Shannon Messenger
Pub. Date: November 3, 2015
Publisher: Aladdin
Formats: Hardcover, Paperback, eBook, Audiobook
Pages: 672
Find it: Goodreads, Amazon, Kindle, Audible, B&N, iBooks, Kobo, TBD
Sophie Foster is on the run—but at
least she’s not alone.
Her closest friends from the Lost
Cities have gone with her to join the Black Swan. They still have doubts about
the shadowy organization, but the only way to find answers is to start working
with them. And as they settle into their new lives, they uncover secrets far
bigger than anything they’d imagined.
But their enemies are far from
done, and unleash a terrifying plague that threatens the safety of an entire
species. Sophie and her friends fight with everything they have—with new allies
joining them—but every choice has consequences. And trusting the wrong person
could prove deadly.
In this game-changing fourth book
in the Keeper of the Lost Cities series, Sophie must question everything to
find a truth that will either save her world—or shatter it. 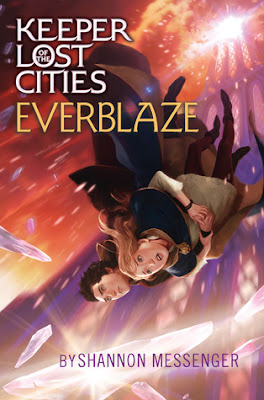 Title: EVERBLAZE (Keeper of the Lost Cities #3)
Author: Shannon Messenger
Pub. Date: November 4, 2014
Publisher: Aladdin
Formats: Hardcover, Paperback, eBook, Audiobook
Pages: 624
Find it: Goodreads, Amazon, Kindle, Audible, B&N, iBooks, Kobo, TBD
Sophie Foster is ready to fight
back.
Her talents are getting stronger,
and with the elusive Black Swan group ignoring her calls for help, she’s
determined to find her kidnappers—before they come after her again.
But a daring mistake leaves her
world teetering on the edge of war, and causes many to fear that she has
finally gone too far. And the deeper Sophie searches, the farther the
conspiracy stretches, proving that her most dangerous enemy might be closer
than she realizes.
In this nail-biting third book in
the Keeper of the Lost Cities series, Sophie must fight the flames of rebellion,
before they destroy everyone and everything she loves. 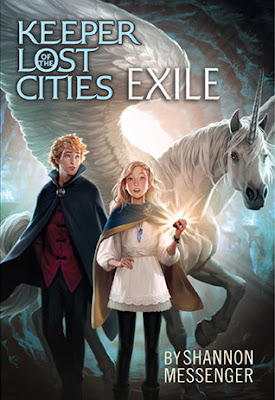 Title: EXILE (Keeper of the Lost Cities #2)
Author: Shannon Messenger
Pub. Date: October 1, 2013
Publisher: Aladdin
Formats: Hardcover, Paperback, eBook, Audiobook
Pages: 576
Find it: Goodreads, Amazon, Kindle, Audible, B&N, iBooks, Kobo, TBD
Sophie Foster thought she was
safe. Settled into her home at Havenfield, surrounded by friends, and using her
unique telepathic abilities to train Silveny–the first female alicorn ever
seen in the Lost Cities–her life finally seems to be coming together.
But Sophie’s kidnappers are still
out there. And when Sophie discovers new messages and clues from the mysterious
Black Swan group, she’s forced to take a terrifying risk—one that puts everyone
in incredible danger.
As long buried secrets rise to the
surface, it’s once again up to Sophie to uncover hidden memories—before someone
close to her is lost forever.
In this second book in the Keeper
of the Lost Cities series, Sophie must journey to the darkest corners of her
luminous world in a sequel that will leave you breathless for more. 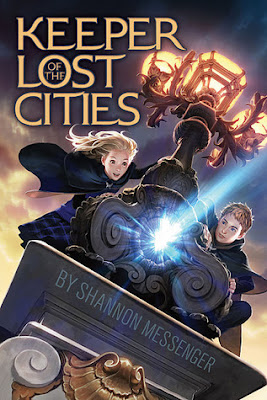 Title: KEEPER OF THE LOST CITIES (Keeper of the
Lost Cities #1)
Author: Shannon Messenger
Pub. Date: October 2, 2012
Publisher: Aladdin
Formats: Hardcover, Paperback, eBook, Audiobook
Pages: 496
Find it: Goodreads, Amazon, Kindle, Audible, B&N, iBooks, Kobo, TBD
Twelve-year-old Sophie Foster has
a secret. She’s a Telepath—someone who hears the thoughts of everyone around
her. It’s a talent she’s never known how to explain.
Everything changes the day she
meets Fitz, a mysterious boy who appears out of nowhere and also reads minds.
She discovers there’s a place she does belong, and that staying with her family
will place her in grave danger. In the blink of an eye, Sophie is forced to leave
behind everything and start a new life in a place that is vastly different from
anything she has ever known.
Sophie has new rules to learn and
new skills to master, and not everyone is thrilled that she has come “home.”
There are secrets buried deep in
Sophie’s memory—secrets about who she really is and why she was hidden among
humans—that other people desperately want. Would even kill for.
In this page-turning debut,
Shannon Messenger creates a riveting story where one girl must figure out why
she is the key to her brand-new world, before the wrong person finds the answer
first.
About Shannon: 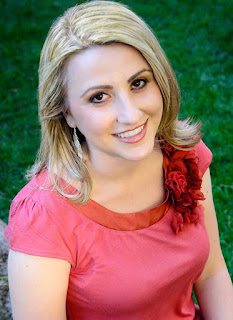 SHANNON MESSENGER graduated from
the USC School of Cinematic Arts where she learned—among other things—that she
liked watching movies much better than making them. She’s studied art,
screenwriting, and film production, but realized her real passion was writing
stories for children. She’s the New York Times and USA Today bestselling author
of the award-winning middle grade series, Keeper of the Lost Cities, as well as
the Sky Fall series for young adults. Her books have been featured on multiple
state reading lists, published in numerous countries, and translated into many
different languages. She lives in Southern California with an embarrassing
number of cats. Visit her online at shannonmessenger.com and follow her on
Twitter and Instagram @sw_messenger and on Facebook @KepperOfTheLostCities.
Website | Twitter | Facebook | Instagram | Pinterest | Goodreads 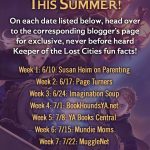