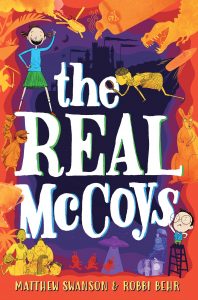 Bold, opinionated, and haplessly self-confident, the world’s greatest fourth-grade detective faces her biggest challenge! When someone kidnaps beloved school mascot Eddie the Owl, Moxie is on the case–but she’s forced to fly solo now that her best friend (and crime-solving partner) has moved away.

Moxie must interview her classmates–both as potential new best friends and as possible suspects. She finds clues and points fingers but can’t save the owl on her own. Enter Moxie’s little brother, Milton. Quiet, cautious, and boring as a butter knife, he’s a good listener.

Can the Real McCoys form an unlikely alliance and solve the crime of the century? 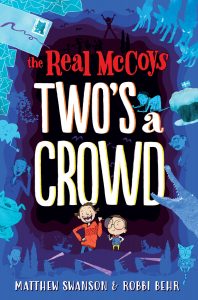 The sequel to the critically acclaimed The Real McCoys!

When a baffling mystery strikes Tiddlywhump Elementary, sibling detectives and absolute opposites Moxie and Milton McCoy are on the case. She’s the doer. He’s the thinker. She’s the heart. He’s her heartburn.

Moxie’s friend Emily has received a suspicious letter signed with nothing but a sinister purple squiggle. Then more letters arrive—along with more questions. Who sent them? What do they mean? Is the world on the brink of collapse?

Milton and Moxie are the perfect problem-solving team…if only they could get along.When their partnership falls apart, Moxie races to identify the mysterious Squiggler first—while learning the hard way that two McCoys really are better than one.

With energetic illustrations on every page, Matthew Swanson and Robbi Behr’s Two’s a Crowd is a vivaciously funny and irresistibly heartfelt mystery for young readers.

Praise for The Real McCoys:

“Readers will breeze through this ingenious combination of text and art, eager for Moxie and Milton’s next case.” —School Library Journal, starred review

“An exceptional middle-grade read packed with giggles for young sleuths who love to explore a little off the beaten path.” —Kirkus Reviews

“Swanson and Behr have created a gem with this hilarious elementary-level read with graphic novel tendencies.” —The Bulletin of the Center for Children’s Books

“This clever, funny, delightful book is just what this crazy world needs. The surprising and inventive interaction between text and illustration shows that two brains are, indeed, better than one–especially when they belong to Matthew Swanson and Robbi Behr.” —Andrea Beaty, #1 New York Times bestselling author of Ada Twist Scientist 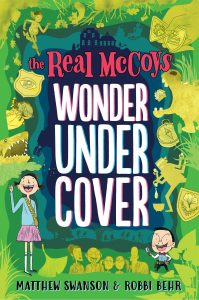 Meanwhile, someone has broken into Tiddlywhump’s Local House of History, and it’s up to Moxie’s little brother, Milton, to begin his own investigation. 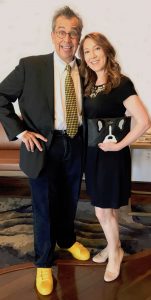 WE ARE MATTHEW SWANSON AND ROBBI BEHR—

WE LIVE AND WORK AND MAKE STUFF TOGETHER IN THE HAYLOFT OF AN OLD BARN ON THE EASTERN SHORE OF MARYLAND.

Combining Robbi’s illustrations and Matthew’s words, we run two small presses— Idiots’Books (illustrated picture books for adults) and Bobbledy Books, (a picture book and music club for kids). Together, we have published more than 60 volumes, including titles with Macmillan, Chronicle Books and LB Kids. We speak, teach, and run workshops on collaboration and creative entrepreneurship (with appearances at TEDx, Mom 2.0,Alt Summit, and ICON7). And we blog about our ongoing adventures in creative mishap.

is an illustrator/print maker/commercial salmon fisherwoman who earned a BA from Williams College and an MFA from the Savannah College of Art and Design. When she is not drawing stuff or eating ice cream or watching sappy late-90s chick movies, she is, in all likelihood, fast asleep.

is a writer/art director/blues harmonica player who has so far failed in every attempt to be swashbuckling. He managed to secure a BA from Williams but was summarily rejected from every MFA program to which he applied—thus emboldening Robbi to remind him almost daily that he is a master of nothing.

3 winners will receive a finished copy of THE REAL MCCOYS SERIES, US Only.