Praise for BETWEEN WILD & RUIN


“What could be a corny premise turns into an exhilarating, fun ride in Edelson’s adept hands. Her characters are smartly drawn, and readers will easily identify with Ruby, a strong yet insecure young artist on the verge of adulthood, who is still recovering from her tragic past . . . Fans of Twilight and modern fairy tales will fall in love with Ruby and root for her eventual romance.” — Blue Ink Review (Starred Review)

“Between Wild and Ruin is a stunning story of legends, romance, and destiny with themes of starting over, small towns, beauty, and community . . . Edelson perfectly breathes new life in mythology by honoring the oral tradition of a small community and the ruins that bring to life Ruby’s destiny.” — Manhattan Book Review

“Highly recommended to mature teens through new adult and adult audiences, this is a story that lingers in the mind long after its final revelation.” — Midwest Book Review

“Descriptions of the New Mexico landscape are rich and atmospheric, arousing the senses with references to the scent of smoke and juniper, the predatory roar of mountain lions, and the brilliant dazzle of stars in the desert sky . . . The writing conveys a sense of timelessness, making it easy to believe Ruby’s sense that the land is spirit-haunted and that Leo, the handsome young man she encounters near the ruins, is somehow connected to it all.” — Clarion Forward

“The paranormal aspects of the tale are credible and richly steeped in traditional lore, and the plot is finely crafted . . . Between Wild and Ruin is most highly recommended.” — Reader’s Favorite (5-Star Review) 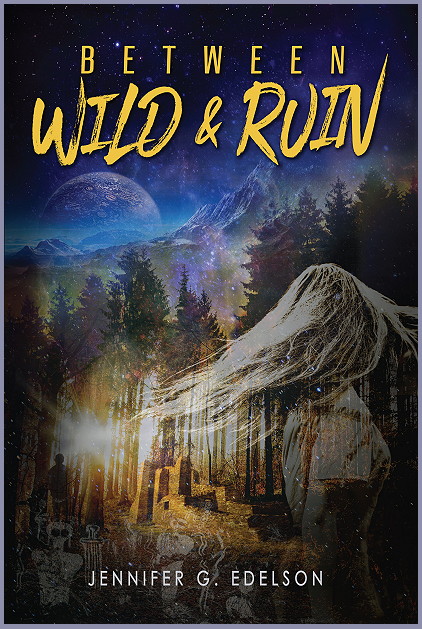 Seventeen-year-old Ruby Brooks has never had a boyfriend. After moving to small-town La Luna, New Mexico following her mother’s untimely death, boys aren’t even on her radar. Ruby just wants to forget the last horrible year and blend in. But when she discovers an ancient pueblo ruin in the forest behind her house, and meets Ezra, a bitter recluse whose once-perfect face was destroyed in an accident he won’t talk about; Angel, La Luna’s handsome sheriff’s deputy, and Leo, a stranger who only appears near the ruin, Ruby finds herself teetering between love, mystery, and other worlds. What happened to Ezra’s face? And why is she so attracted to the one boy in town everyone despises? As Ruby unravels her own connections to both Ezra and the pueblo ruin, she’ll learn surfaces are deceiving. Especially in the heart of New Mexico, where spirits and legends aren’t always just campfire stories.

Set against a Northern New Mexico backdrop, Between Wild and Ruin is a young adult coming-of-age story that captures the wild and whimsical pulse of New Mexico through the eyes of teens Ruby Brooks, Angel Ruiz, and Ezra Lucero. The first book in the Wild and Ruin series, Between Wild and Ruin explores the time-tested credo ‘never judge a book by its cover’ through a paranormal lens, weaving Puebloan and Hispanic folklore and Southwest cultural narratives into tightly written, high-concept fiction ‘brimming with mystery, intrigue,’ and as Kirkus Reviews puts it, an “intriguing historical drama and an over-the top quadrangle romance.”

You can purchaseBetween Wild & Ruin at the following Retailers: 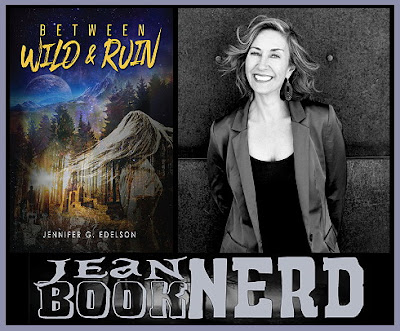 Jennifer G. Edelson is a writer, trained artist, former attorney, pizza lover, and hard-core Bollywood fan. She has a BFA in Sculpture and a J.D. in law and has taught both creative writing and legal research and writing at several fine institutions, including the University of Minnesota. Originally a California native, she currently resides in Santa Fe, New Mexico with her husband, kids, and dog, Hubble after surviving years in the Minnesota tundra. Other than writing, Jennifer loves hiking, traveling, Albert Camus, Dr. Seuss, dark chocolate, coffee, exploring mysterious places, and meeting new people—if you’re human (or otherwise), odds are she’ll probably love you.

Oh my gosh, my nightstand is a nightmare! It’s like a repository for stuff that exists just to be knocked to the floor every night as I’m climbing into bed. Right now, book-wise, I’ve got Vicious, by V.E. Schwab, Love and Other Words, by Christina Lauren, and Cazadora, by Julia Debarrizo piled up on top of another six-ish local historical/archeological/mythological non-fiction books I’m reading for research. Other than that? A bowl of crystals and rocks I’ve collected, or that have been given to me, a large hunk of raw Malachite, ‘miracle’ sand from El Santuario de Chimayó from Chimayo, NM, four lip balms, a couple bottles of CBD salve, two huge bottles of lotion (it’s pretty freaking dry living up here in Santa Fe at 7400 feet!), hairbands, earplugs, my journal, an eraser, a pocket Sudoku book, and about twenty pencils and pens.

I’d give a lot to meet my all-time favorite writer, Albert Camus (existential anarchist, activist, journalist, and Nobel prize winner for the book The Stranger). Aside from Camus’ gorgeous prose, his ability to peg the human condition and then move on from the worst of it, while still writing honest and hopeful fiction, continues to astound me. His work puts my world into perspective; his writing, both his prose and the subjects he writes about also challenges me to examine meaning, to dig deeper when I write and when I interact with people. Camus was also just a really awesome person. Originally from Alegria, he was an anti-colonialist/anti-nationalist who strongly disagreed with authoritative colonialism and the harsh treatment of Arabs and Berbers by French authorities in Algeria. He worked for the leftist newspaper Alger Republican, and was editor-in-chief at the Paris-Soir, a mainstream French Newspaper, while secretly working with the underground resistance against the Germans during the French Occupation. And that’s just the tip of his activist iceberg. On paper at least, Camus was the kind of person that stood up for what he believed in, and in the face of awfulness, still never lost faith in humans or of his duty, just by nature of being human himself, to society and humanity.

People who eat popcorn loudly in a movie theater, young children running rampant in public spaces (yes, I have my own, and yes, I get it, but still . . .), people who are mean just because, and what seems to be a growing general lack of societal courteousness and human decency when it comes to interacting with strangers.

I do not outline my book characters’ backstories before writing or map out my plot. I kind of just write and see what comes of it. In that way, my writing process is more organic, allowing my characters and the story to figure out who and what they are as I go along. Also, I’m just really bad at being organized. I’ve actually tried to outline, and it just never works out.

Just one? Ugh! I love words. Narrowing it down is torturous. For now, let’s go with debris, discipline, and ubiquitous, for no other reason than I really love the way they feel in my mouth and head when I say them.

I attached a few pics of our nine-year-old Coton De Tulear, Hubble (the wonder dog) (and the best writing mascot)! 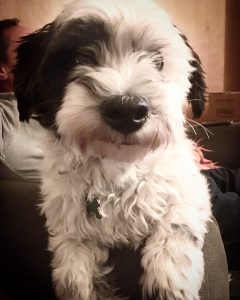 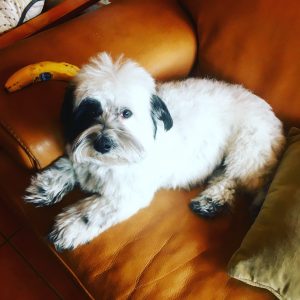 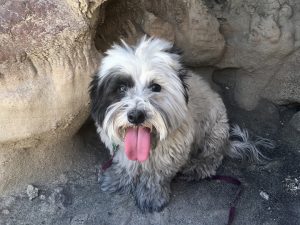