Today we have the blog tour for Amanda Ashby ’s new contemporary romance, ONCE IN A BLUE MOON! Check it out and be sure to order your copy today!

Title: Once In a Blue Moon

About Once In a Blue Moon:

Florist Laney George has a successful business, amazing friends and big, big dreams––oh, and a broken heart. But she’s working through that last one. Then the man she hoped to never see again shows up––and Laney’s carefully ordered plans are experiencing technical difficulties.

Celebrated Author Adam Fitzpatrick planned to be in St. Clair for no more than a day. Sign the books, and get out. Same story, different day. What he didn’t count on was Laney George, who happens to be the star of his somewhat fictional tale. She broke his heart years ago, and he’d gone a bit mad. Okay, maybe a lot mad––and he put everything in his book, never imagining it would be a world-wide best seller.

Now that he’s seen her again, he wants answers. But it isn’t just her that draws him in. It’s the town, something is happening and for the first time in years…he can write again. If only he could convince the woman who hates him most to start a new chapter in their story.

She rounded the corner and almost went crashing into the silver-haired figure of Olive Carmichael peering around the fence that overlooked Sam’s café courtyard.

“I’m so sorry,” Laney said as Olive put out a steadying hand to stop them both from toppling over. “Are you okay?” “I’m fine,” Olive said in a hushed voice as she nodded into the courtyard. Violet ignored it all and went darting off to her favorite tree. “Shhh. They’re just getting to the good bit.”

She peered over the fence. Adam was standing between two elderly women who both had their arms wrapped around him while a third woman held up her phone and snapped shot after shot. All three of them belonged to Olive’s book club and were notorious flirts.

“That’s great, Doctor Josh, but could you just undo one more button of your shirt? Remember the scene where Joshua and Elle were in Paris? They were so hot that they went swimming in the fountain?”

“Two buttons,” the second woman said firmly, her hand still clutched tightly around his waist. “I’m sure it was two buttons in the book.”

Laney’s eyes widened, and she turned back to a grinning Olive. “What’s going on?”

“Poor Adam. He only came in to grab coffee, but when Moira saw him she insisted he join us. I had to give Paige a hand with a delivery, and when I came back this was happening. They’re getting him to reenact their favorite scenes from Blue Moon. Though I think they might be getting carried away.”

The linen shirt did nothing to hide his muscled shoulders and arms, and the black shading of his stubble gave his jawline a dangerous edge. Her mouth went dry. She jabbed her nails into her palm.

“Why’s he letting them?”

“You should’ve heard some of the questions they were asking. This is probably less intrusive,” Olive said before grinning. “I’m about to go and stop it. I just wanted to see how polite Adam was. Turns out–very. Plus, I love the fountain scene. Remember when he got to his knees and kissed Elle’s stomach? So sexy.”

Laney took a deep breath. She’d never been to Paris with Adam or swum in a fountain. But they’d gone to a lake together, so she had seen the slick beads of water sliding down his perfect chest and abs. His arms wrapped around her, letting the water suspend them as they kissed. The press of his mouth on her own neck. His fingers hot against her skin.

She squeezed her eyes shut to shake away the image. It flickered and blurred before finally dissolving. When she opened them, Olive studied her with amusement.

“Yup.” She quickly nodded. This was her own fault for leaving the store. “Totally fine.”

“Will do,” Laney said and waited until Olive disappeared back through the front of Sam’s café and reappeared in the courtyard. Whatever she said to the other women worked, and, several minutes later, Adam said goodbye and disappeared from sight.

Probably running for his life.

Maybe it would make him think twice before leaving his apartment again. And the more he stayed there, the less she’d have to worry about accidently bumping into him. She pressed her burning forehead against the fence.

“Hiding from me again, Laney?” A low drawl slid along her limbs as she slowly turned to face him.

“Of course not,” she said. Which was kind of true. She’d been spying. There was a difference. “I just bumped into Olive. We were having a chat before she went to rescue you from…I don’t even know what.”

“Makes two of us,” he said. “I didn’t realize the locals were so colorful here.”

“You could have said no. You don’t need to charm everyone in town.”

“Worried you might be next?” His dark eyes glittered. As if he knew what effect he’d been having on her. She pressed her nails into her palm.

“I think we both know the answer to that. Now, if you’ll excuse me. I have to go.”

“Sure,” he said, the hint of a smile still tugging at his mouth. “But aren’t you forgetting something?”

“What am I forgetting?” she said, her frayed nerves turning to anger. “To give you a proper goodbye. Or a kiss on the cheek, or—”

“I meant your dog.” He nodded over to the tree where Violet was still playing. “Though if you want to kiss, far be it from me to stop you.”

Horror and humiliation choked her throat. Kissing? Why had she even mentioned it? But of course she knew. It was the damn memory of the lake. Clearly, it wasn’t safe to be near him. Pride jabbed at her, urging her to say something in her defense, but she bit down a retort.

She’d already dug herself a big enough hole. Without another word, she marched over to the tree and called for her dog.

When she turned around, Adam was gone.

Good. This was a reminder of why she had to avoid him at all costs.

Catch up on the Series Today!

Amanda Ashby was born in Australia but now lives in New Zealand where she writes romance, young adult and middle grade books. She also owns far too many vintage tablecloths and likes to delight her family by constantly rearranging the furniture.

She has a degree in English and Journalism from the University of Queensland and is married with two children. Her debut book was nominated for a Romantic Times Reviewers Choice award, and her first young adult book was listed by the New York Public Library’s Stuff for the Teen Age. Because she’s mysterious she also writes middle grade books under the name, Catherine Holt and hopes that all this writing won’t interfere with her Netflix schedule.

Connect with the Author:

Enter the Giveaway:
a Rafflecopter giveaway 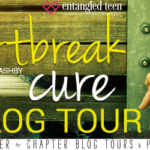