I am thrilled to be helping reveal the awesome trailer for THE SECRETS OF HAWTHORNE HOUSE by Donald Firesmith hosted by Rockstar Book Tours. Check out the trailer and make sure to enter the giveaway! 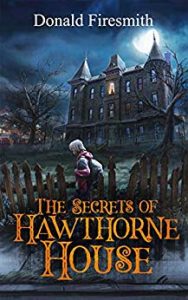 Fifteen-year-old Matt Mitchell was having the worst summer imaginable. His misery started when his mother died in a senseless car accident. Matt’s grieving father, unable to remain in the family’s seaside cottage, moved Matt and his twin sister as far as possible from the ocean they loved.
But their relocation to the small town of Hawthorne, Indiana only made Matt’s life more difficult. Three bullies at his new high school dedicated themselves to making him miserable. To top it off, Matt heard that the recluse living in the dilapidated Victorian mansion next door was none other than Old Lady Hawthorne, the town’s infamous witch and murderer of wayward husbands.

Then, Old Lady Hawthorne’s niece and her three children moved in next door, and something extraordinary happened. Matt met Gerallt, the strange boy destined to become his best friend. And when Gerallt divulged the Hawthornes’ family secret, it changed Matt’s life forever.

The Secrets of Hawthorne House is the story of an unlikely friendship, the clash of two radically different cultures, hidden magic, and a search for the lost Hawthorne treasure.

“The complexity and depth of The Secrets of Hawthorne House, as well as its incorporation of magical elements with realistic struggles and confrontations creates a captivating story that is hard to put down, original, and satisfyingly unique. Its lessons about different cultures and backgrounds, the process of grief and recovery, and the acceptance of ideas and realities a bit different from the norm… creates a powerful interplay of mystery and intrigue and healing that will keep all ages thoroughly engrossed.” — D. Donovan, Senior Reviewer, Midwest Book Review

“There is a lovely lyrical quality to Firesmith’s prose, the authorial voice is strong, and the author has a penchant for rich description.” — BookLife Prize Critic’s Report

“I enjoyed reading The Secrets of Hawthorne House… I was drawn in from the beginning… There is humor, sorrow, adventure, mystery, love and realistic, relatable characters in this book. It’s a middle school YA read, but I think just about anyone would enjoy reading it!” — United Indie Book Blog

“The Secrets of Hawthorne House by Donald Firesmith is a charming ‘found family’ story that deftly illustrates how people of different cultures/spiritual backgrounds can get along just fine…  I adored that the author wrote the Hawthornes as they spoke, accents and all; I loved it! I’m definitely looking forward to reading the next in the series!” — J. Aislynn d’Merricksson, Author 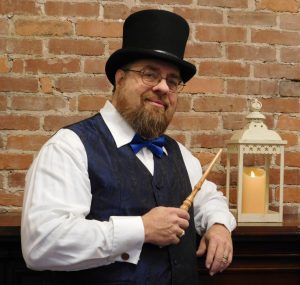 Donald Firesmith is an award-winning author of speculative fiction including science fiction, paranormal, and fantasy novels as well as seven software/system engineering books.

A computer geek by day, Donald Firesmith works as a system and software engineer helping the US Government acquire large, complex software-intensive systems. In this guise, he has authored seven technical books, written numerous software- and system-related articles and papers, and spoken at more conferences than he can possibly remember. He is also proud to have been named a Distinguished Engineer by the Association of Computing Machinery, although his pride is tempered somewhat worrying whether the term “distinguished” makes him sound more like a graybeard academic rather than an active engineer whose beard is still more red than gray.

By night and on weekends, his alter ego writes modern paranormal fantasy, apocalyptic science fiction, action and adventure novels and relaxes by handcrafting magic wands from various magical woods and mystical gemstones. His first foray into fiction is the book Magical Wands: A Cornucopia of Wand Lore written under the pen name Wolfrick Ignatius Feuerschmied. He lives in Crafton, Pennsylvania with his wife Becky, his son Dane, and varying numbers of dogs and cats.

His magical wands and autographed copies of his books are available at Firesmith’s Wand Shoppe.

Giveaway Details:
One lucky winner will receive a signed finished copy of Hell Holes 1: What Lurks Below, US Only.