In this electrifying YA dystopian sequel to Beware the Night, Veda is captured and leveraged against her best friend, who fights for the opposing force.

Civil war has come to the island of Bellona. Veda Adeline believes in the Night. She’s joined the underground revolutionaries, led by Dorian Winters, and they’re determined to overthrow the ruling Imperi and find justice for her people.

Nico Denali, Veda’s childhood friend and maybe-something-more, is one of those ruling Imperi, and he’s just been named heir to the most powerful man above ground.

As the war intensifies, Veda and Nico are leveraged against each other: Veda is above as a hostage of the Imperi and Nico is below, taken by the Night. There’s no way Dorian is letting such a valuable hostage go.

The island will burn unless Veda and Nico can come together to rip everything apart. But Nico and Dorian will never trust each other, and Veda’s heart might be the biggest casualty.

Praise for Defy the Sun

“Jessika Fleck’s duology is a lyrical adventure with a twisting vein of romance throughout. I was both enchanted and haunted till the very end!” —Erin Beaty, author of the Traitor’s Trilogy

“Jessika Fleck delights with a new fantasy novel set in a world where the Sun reigns supreme and the Night is your enemy—literally. Brims with secrets, betrayal, and a genuinely believable love triangle!” —Pintip Dunn, New York Times bestselling author of the Forget Tomorrow series

Jessika Fleck is an author, unapologetic coffee drinker, and knitter — she sincerely hopes to one day discover a way to do all three at once. Until then, she continues collecting vintage typewriters and hourglasses, dreaming of an Ireland getaway, and convincing her husband they NEED more kittens. Her YA debut, THE CASTAWAYS (Entangled TEEN), is now available. Her next YA novel, BEWARE THE NIGHT (Swoon Reads/Macmillan) releases March 12, 2019. More at 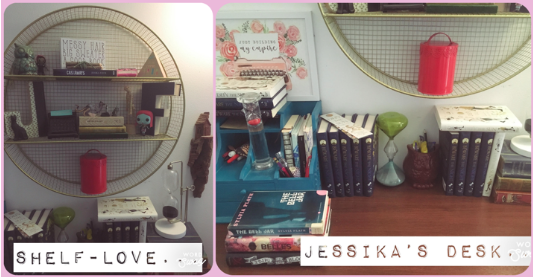 Ah, my desk. It’s organized chaos and I wouldn’t have it any other way. I collect small trinkets that are either related to my book or that I find inspiring. On the shelf above my desk—or the place where I stare blankly when stuck in a scene or in need of a coffee refill—some of the things you will find are: a ceramic owl, a voodoo style doll of Rosie the Riveter, small typewriters, my initials cut out of books, a lucky cat made of peat turf from Ireland, a hand-blown glass ferret, tiny statues and various crystals, a Sally Funko Pop, and a skeleton form. On the desk itself is a collection of copies of my books, a few of my hourglasses (I actually own 10-15), books on writing craft/inspiration, the books I’m currently reading, an owl full of pens and pencils, and some antique novels. Usually my laptop and a notebook are there as well, but today I’m writing on my couch next to my puppy. 😉