Today Chantal Gadoury, The Parliament House, and Rockstar Book Tours are revealing the cover for BEYOND THE SHORE AND SHADOWS, the second book in her YA Little Mermaid Retelling Series, which releases May 2021! Check out the awesome cover and enter to win a $10 Amazon GC! 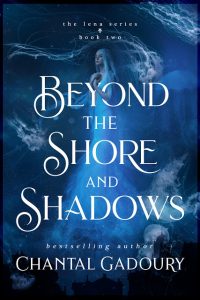 Title: BEYOND THE SHORE AND SHADOWS (Lena #2)

A Merrow with a Choice

A Man Who Loved Her

And an Evil that could destroy them both

Lena is a merrow in possession of the Magick Skal, the shell once owned by the Queen of the merrows. And now, Lord Jarl knows her secret and wants it for himself.

After running away from the Lundby-Wyatt Inn, leaving behind everything she was familiar with, Lena finds herself in the company of the warm and kind Soren Emil.

When the villagers turn against her and Soren, they’re forced to leave the burning Bror Boghandel behind and escape to a forgotten cottage on the edge of the shore, where no one will find them. Lena knows she must get the shell back to the sea and destroy it, before it falls into the hands of Lord Jarl, or worse, his apprentice, Jace Wyatt.

With the help of some unruly pirates, Lena and Soren journey to the sea, a place Lena never thought she’d return to. There, she will have to face not only the Sea King’s army, the Fosse-Søfolk, but the impossible choice to sacrifice her own life, or the life of the man she loves.

What will Lena choose? 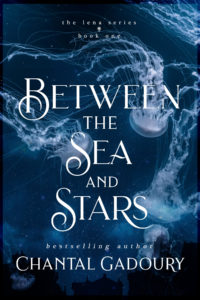 Title: BETWEEN THE SEA AND STARS (Lena #1)

A Girl Who Dreamed Of Something More…

Lena, a Merrow girl, lives in the Skagerrak sea with her father, Carrick and her brother, Javelin who tells her of the legend of the Merrow Queen murdered by her human lover when greed takes over. But what’s worth spilling the queen’s blood? Gifted from Poseidon, himself, a magic shell gives any human the ability to control both land and sea.

When Javelin is called to join a clan of Merrow soldiers bent on protecting their waters from human invasion, Lena resists Merrow law and ventures to the shore with no choice but to swim to land.

With newfound legs, Lena is whisked away on a new adventure with new friends and new trouble. Everyone seems to want something from her as intrigue lurks around every corner.

Trying her best to hide who she is and remain safe from the dangers of the human world, will Lena finally find where she belongs, or will she be swept into a strong and stormy current by lust, greed, and jealousy?

Excerpt from BETWEEN THE SEA AND STARS (Lena #1):

“Tell me the legend of the Skagerrak queen.”

Javelin lifted a brow. “It’s hardly a legend, Lena,” he said. “It’s barely been a decade.” His voice was easy, unbothered by the possibility of being overheard. They were alone in this place. There was no need to whisper or scold or shush. Still, he groaned. “I’ve told that one a thousand times. You should know it by heart. Aren’t you tired of it yet?”

He rolled his eyes, but his mouth curved into a grin. “Fine.” His scooped a clam shell out of the sand and began sliding the sharp side of a rock against its grain. “The queen fell in love with a human man,” he began, his strong fingers holding the clam firmly in place. “Every full moon, she used her magic to travel ashore to see him.”

Lena settled onto her elbows, relishing the smooth sound of her brother’s voice as he recited the tale. A dreamy smile spread over her lips.

“I wonder how she met him,” she murmured softly, tilting her chin up and letting her lashes flutter shut.

“Likely the same way any merrow meets a human,” Javelin teased. “Shipwrecked during one of Poseidon’s storms. She should have drowned him immediately.”

“But she couldn’t!” Lena’s eyes pinged open. “For he was devilishly handsome, even soaking wet. The most handsome man she’d ever seen.”

“Devilish is right,” Javelin allowed. “Whether he was handsome or not, I’ll let your imagination decide.”

“Oh, he was.” Lena was smiling widely now. “He was, perhaps, the most beautiful human man in existence, and desperately enraptured by the queen. Each full moon, he waited for her, pacing the beach like a madman. And when she would emerge from the sea, he’d run hip-deep to meet her, unable to spend one more moment apart. He’d wrap his muscular arms around her—”

“And they’d dance together,” she pressed on, giggling, “as only humans can do. They’d dance and dance the hours away, bathed in starlight, humming songs into one another’s ears.”

“Until one night. . .” Javelin prompted smugly, and Lena rolled her eyes.

“Until one night,” she sighed, “something overcame the queen’s lover. Greed.”

“Human greed,” Javelin corrected. “Human nature. It was only a matter of time.”

She glared at him, but didn’t interrupt as he continued. This was the best and the worst part of the tale, and Javelin—damn him, was good at telling it. And he knew.

“That night, the queen swam toward the surface, impatient as ever she was. Ready to be rid of her tail. Ready to be human again. Her magic was a gift from Poseidon himself, contained in a delicate shell which she wore around her neck on a gold chain. It gave her the ability to explore the shore, and to control the storms and seas.”

“As she swam, the queen began to change. Faint sobs faltered over her blue-scaled lips—cries of pain, lost to the rushing lull of the waves and the urgent beating of her fins. Swiftly, her tail separated into two perfectly shaped legs, and she rose out of the sea.”

“Don’t leave out the good parts,” Lena whispered. She knew her brother would skim over the romance just to annoy her.

Javelin gave her a pointed look. Then he grinned. “The moon was high that night,” he said, lowering his voice to a hush for effect. “The land was illuminated by an eerie, silver glow. Beneath its light, the queen’s new flesh was creamy and soft. Her hair became one with the wind, and her body shivered against a violent, uproarious breeze. Perhaps it was a warning from the gods, but the queen didn’t see it as such. The human lands were cold, suffering a new, frigid season, but her heart remained warm. She smiled, though her transition had been agony, when she heard the sound of water splashing and saw her beloved moving toward her through the shallows.

“She sang his name as he brushed chaste kisses against her neck, and relaxed fully against him, trusting him completely. She was blind to the wicked yearning which had wrapped around his heart. Which made his body tense, which crushed his lungs till he could hardly breathe. He wanted her shell, for he’d discovered what powers were locked inside that delicate charm. Powers gifted to whomsoever possessed it. His fingers dipped to her throat, caressing the shell which had allowed her to return to him, again and again. The queen eyed him strangely, and he dropped his hands to her waist, tugging her against him, kissing her deeply.”

“She was in love,” Lena amended.

“She was both,” he conceded. “And that foolish love consumed her. Deceived her. Seduced her. Clouded her eyes, so love was all she could see. But that fateful eve, her beloved’s affection was not what it seemed. He’d seduced himself too, with all the prospects of what might be. His own love had been replaced by a lust for riches unknown. For control of the land and sea.”

Lena winced, for she knew what came next.

“He pressed his mouth against the queen’s skin, whispering sweet words, distracting her. She was smiling as he sent a knife into her back. Smiling, even as her eyes went wide with shock.”

“The queen’s lover twisted his blade, releasing her cold merrow blood to the sand. He reached for the shell, yanking on its golden chain. But in the last throes of breath, the queen resisted him and threw the shell into the crashing waves, bidding Poseidon to wash it away.

“With a promised curse on his lips, her lover trailed back into the night, determined to one day possess the world between the sea and stars, and all who dwell beneath the earth, in the ocean’s depths. Our people.” He glanced sidelong at Lena, his meaning clear. “The merrows.”

“And the queen. . .” Lena murmured, though she already knew how the tale would end.

“He left her to dissolve into sea foam. She was washed away forever by the waves.”

Lena released a long breath and gazed at her hands, trying to imagine what it would be like to watch herself slowly disappear; what heartache and betrayal the queen must have felt in her last moments. She knew this was a gruesome tale, but a part of her thought the better parts, the magic and romance, were worth the gruesome bits.

“What do you think it would be like, to walk?” she wondered aloud. “Would it be like having two tails?”

“I don’t know,” Javelin chuckled. “I suppose it might be.”

“Where do you think the shell is now?”

Javelin shrugged. From a stony shelf above his head, he retrieved a slim, wooden railing he’d found in a ship a few days before and carefully tied his sharpened clamshell to its jagged end.

Lena smiled, realizing he’d made her a hunting spear.

“Poseidon is said to have hidden the shell before the human lover, or any human, could steal it. It could be anywhere.”

“If you could go to the surface, would you?”

Javelin pinched his lips together and didn’t speak. It was a silent reprimand. He knew how Lena longed to break through the waves, to see the human world with her own eyes, to know the uses of all the odd objects they’d collected over the years. But the laws of the sea were strict, and the king’s leniency had all but vanished in recent years.

Any merrow caught peeking at the shore was punished. Some were even struck down by Poseidon and reduced to sea foam, just like the queen.

“This is where we belong, Lena,” Javelin said softly, firmly.

“But how do you know?” She swirled upright and swam along the edge of the grotto, brushing her fingertips over cups and spoons and heaps of sodden fabric. Over small chests and tarnished, palm-sized figurines and other mysterious, unnamed things. “Haven’t you ever wondered what it would be like, to live on the land? To live among them? To be one of them?”

She groaned, and sank to her brother’s side, resting her head on his shoulder. “It can’t be as bad as everyone believes. Humans can’t all be the same. We’re not all the same,” she reasoned quietly. 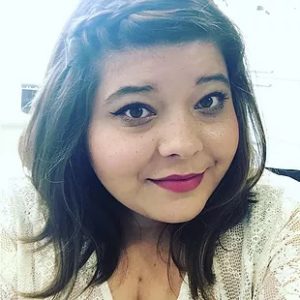 Chantal Gadoury is an Amazon Best Selling Author who is originally from the countryside of Muncy, PA. Chantal likes anything Disney, plays a mean game of Disney trivia, enjoys painting and has a interest in British History. Chantal first started writing stories at the age of seven and continues that love of writing today. As a recent college graduate from Susquehanna University, with a degree in Creative Writing, writing novels is a dream come true.