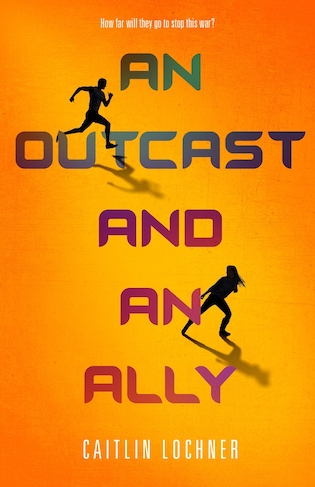 Dark secrets and conflicting loyalties abound as four superpowered teens are torn apart by war in Caitlin Lochner’s An Outcast and an Ally, the epic YA sequel to A Soldier and a Liar.

Lai, Jay, Al, and Erik are on the run after the military accuses them of being traitors. Tensions between everyone are high, but they have to stick together if they want to survive. And somehow stop the war that’s now in full swing.

But when Erik returns to the rebels to find answers about his past, Lai, Al, and Jay have no choice but to go to the Order―a peace coalition bent on stopping the rebels and dissolving the enmity between gifted and ungifted. However, the longer the war drags on, the more Lai’s long-kept secrets threaten to destroy everything she’s ever worked for. Sparks fly as the team constantly questions whether they can trust one another and everyone tries to navigate a war that will change everything.

Filled with the same high-stakes superpowered action and complex relationships as A Soldier and A Liar, Caitlin’s first book, An Outcast and an Ally brings this story to a dramatic and satisfying close.

I’m a nerd, traveler, and architecture enthusiast who worked as an assistant English teacher in Tokyo for three years before pursuing my MFA in Creative Writing at the University of Central Florida. I love reading and writing anything with magic, adventure, and complex found-family relationships. I can typically be found absorbed in books, games, or manga, or else obsessing over said books, games, and manga.

WHAT IS ON MY DESK? 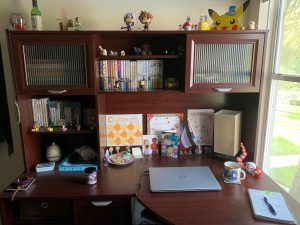 I really like to surround myself with things that give me joy in some way while I work! Which, for me, includes a lot of nerdy knickknacks, haha. Having reminders of some of my favorite or most nostalgic series, like Cardcaptor Sakura, Pokémon, Kingdom Hearts, and Tokyo Ghoul, can sometimes really give me an extra boost of motivation as I remember how much I love these stories. 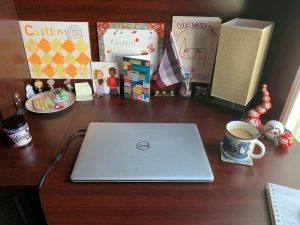 Then there are the other, more personal things that give me joy. The small boards along the back that have notes from my past students, back when I taught in Japan. The fanart someone mailed me of Lai and Al (along with probably the sweetest letter I’ve ever read), which is pretty much my most prized possession. A really considerate card from one of my students last semester. A kind note someone gave me about my writing. My first asexual pride flag, which I got at my first Pride parade last year with a good friend—a friend who constantly makes me feel welcome in the LGBTQ+ community, even when my anxiety tells me I don’t belong. Sometimes seeing all these reminders of love and support helps me a lot when I’m struggling with my mental health and feelings of not being good enough. They make me proud and remind me that what I’m doing isn’t meaningless.

On the more practical side, I’ve got my lamp, a coaster for whatever I’m drinking (almost always coffee), a planner for making my daily to-do lists and keeping track of my monthly schedule, a small dish of candies for when I need a reward for meeting short-term goals, and a candle on the left for when I’m working and need an extra pick me up. You’ve probably noticed, but I like to give myself lots of little motivational things.

And last but not least, I have my daruma! These are the little round guys in the top right corner, next to my lamp. You usually buy a daruma with both its eyes blank. You draw one eye in and set a goal; once you’ve reached the goal, you draw the other eye in. I’m all about goal-setting, so for me, they’re like encouragement to keep working hard. The stack of daruma is just decorative, but the red daruma is from when I made it my goal to get A Soldier and a Liar published, and the white daruma is for getting An Outcast and an Ally published. You can’t see in the picture because my spoon is in the way (whoops), but I haven’t filled in my white daruma’s other eye yet. I’m planning on doing it on publication day and have been looking forward to seeing its face complete for over a year!

And that’s my desk! Basically, I like to have a happy-making, affirming, motivational workspace with not too much clutter. And sweets. Always gotta have the sweets.