I am thrilled to be hosting a spot on the BROTHER’S KEEPER by Julie Lee Blog Tour hosted by Rockstar Book Tours. Check out my post and make sure to enter the giveaway! 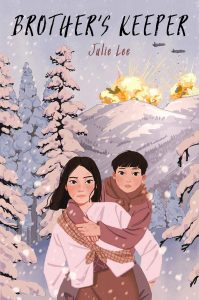 Can two children escape North Korea on their own?

Twelve-year-old Sora and her family live under an iron set of rules: No travel without a permit. No criticism of the government. No absences from Communist meetings. Wear red. Hang pictures of the Great Leader. Don’t trust your neighbors. Don’t speak your mind. You are being watched.

But war is coming, war between North and South Korea, between the Soviets and the Americans. War causes chaos–and war is the perfect time to escape. The plan is simple: Sora and her family will walk hundreds of miles to the South Korean city of Busan from their tiny mountain village. They just need to avoid napalm, frostbite, border guards, and enemy soldiers.

But they can’t. And when an incendiary bombing changes everything, Sora and her little brother Young will have to get to Busan on their own. Can a twelve-year-old girl and her eight-year-old brother survive three hundred miles of warzone in winter?

Haunting, timely, and beautiful, this harrowing novel from a searing new talent offers readers a glimpse into a vanished time and a closed nation.

I didn’t want to step into the river, but I had to. He was floating away.

“Youngsoo!” I stomped in waist- deep, gripping my toes against the sharp- edged clams on the rocky floor. Rushing water swirled around me. I grabbed my little brother’s hand and dragged him back to shore.

“Sorry, Noona,” Youngsoo said, calling me older sister in Korean. “I leaned out too far with my net.” It wasn’t the first time he’d lost his balance and tipped over while fi shing, his stomach smacking against the water. He shivered in his wet uniform.

“I told you not to go in too deep. Hold still.” I wrung the ends of his shirt and straightened the red scarf around his neck, then took a step back and frowned. What would Omahni say? I could already feel our mother’s punishment stick snapping against my calves. “How could you have fallen in right before your Sonyondan Club meeting? Your scarf is so wet, it’s almost black!”

I stared at him. Everyone knew the red scarf was the most important part of the communist youth club uniform. Red had become sacred. It fluttered in the star of our new North Korean flag. Mothers tied and retied it cautiously around their children’s necks. And red armbands stood out on the white of the villagers’ clothes like a bloodstain.

Youngsoo hung his head low. “I almost caught a fish, Noona. It slipped out of my net.”

“I know, I know,” I said impatiently. “Every day you almost catch a big one.”

But then a pang of regret shot through me, knowing how hard he tried despite always coming home with an empty net.

“I’ll make it up to you tomorrow. What kind of fish do you want? Trout? Salmon? Catfi sh?” He puff ed up his skinny chest like a little man and extended his arm toward the river. “Just name it, and I’ll catch it for you.”

Before I had the chance to give him a stern sideways glance, the kind Omahni always gave me, he smiled earnestly, a piece of black plum skin caught in his teeth. I sighed, wondering if this was how he always kept our mother from staying mad at him too long.

A bell chimed from the schoolhouse on the hill. The teacher, Comrade Cho, stood in front waiting to close the doors, a red band cinched tightly around his upper arm. Stragglers from Youngsoo’s third- grade class sprinted past us as we headed up the slope.

“You can’t be dumber than the fish if you want to catch them!” a boy shouted at us, his red scarf knotted perfectly.

Youngsoo pushed up his sleeves. “At least I’m not dumber than you! And my sister is smarter than everyone! Right, Noona?”

I groaned. Why did he have to drag me into this?

“Your sister can’t be that smart! She doesn’t even go to school anymore!” the boy called back, laughing from the hilltop.

My shoulders stiffened. He was right. When I’d turned twelve two months ago, Omahni had pulled me out of school to look after my little brothers.

I glanced at Youngsoo—so drenched and disheveled. Did he even know how lucky he was?

I pushed him up the hill. Omahni said that skipping even one communist youth club meeting meant Youngsoo’s name—no, our family name—would go on a government watch list.

And then terrible things would happen.

“What a beautiful day to labor in this socialist paradise!” Comrade Cho announced as the students approached. “Don’t forget to continue gathering scrap iron for weapons and bullets, or else your parents will have to pay a fi ne. Your work is important in making the Fatherland strong!”

Youngsoo joined the wave of red running up the hill, then disappeared inside the A-frame timber schoolhouse. Looking at it, I felt a twinge of loss.

Not for the Girls’ Sonyondan Club that I no longer attended, joining my parents at grown-up Party meetings instead.

Not for the new teacher, Comrade Cho, who gave candy to students for reporting anything anti- communist their parents said at home.

Not for the kids in class, who were loyal to the Party first and family second, and could never be trusted as friends.

But for all the learning I was missing. Math. Geography. Science.

When I could escape from my chores, I hid behind the willow tree by the school window and eavesdropped on the class.

Today, though, was not a day for escaping chores. I picked up my laundry basket and balanced it on top of my head. The sound of wooden paddles beckoned me back toward the river, and like a funeral marcher, I went.

Downstream, mounds of laundry littered the bank. Women squatted on flat boulders jutting from the sandbars. They scrubbed pants with thick bar soap, their shoulders pumping like pistons, then beat them with fl at paddles as if spanking their children. Without any men nearby, the women gossiped about husbands and mothers-in-law as they lifted their shirts to wipe their faces. I looked away.

“Yah, Sora! What are you so embarrassed about?” asked Mrs. Lee, her cheeks ruddy from the sun.

I smiled, tight- lipped, and found an open area to set my basket. My long tan skirt was soaked from saving Youngsoo.

“Why’s your mom sending a girl to do a woman’s job, huh?” a farmer’s wife shouted.

“Who else is she supposed to send—her sons? Anyway, Sora’s not such a little girl anymore, right?” Mrs. Lee said. “Look, she’s even starting to get little breasts now.” She poked me in the ribs, and I jerked like a string puppet.

They laughed heartily. My cheeks burned, and I hunched my back to hide my chest. I gazed up at the schoolhouse as if it might somehow reach down to save me, the straw basket pressing against my shins. But it wouldn’t, and the laundry wouldn’t wash itself.

I took out my brothers’ dirty clothes—Jisoo’s cloth diapers, Youngsoo’s muddy uniform pants—and crouched in the shallows, joining the drumbeat of women. I plunged my raw knuckles into the soapy water, hiding them beneath the cloudy white.

A grandmother came running from around the hill, splashing along the river’s edge toward the rest of us, and I watched the waves ripple over my hands. At first I hardly noticed the whispers, the way the women huddled around her. But their murmurs grew, and I looked up at them—their mouths agape, their brows creased—and suddenly everything felt wrong.

The women started hastily packing unfinished laundry into their baskets. I rushed to rinse Youngsoo’s uniform pants. Something was not right. I needed to go. The last time a message had spread this urgently, the landlord’s son was found floating facedown in the river, his body bloated like a blood sausage. I lifted the basket onto my head and hurried onto the main road through the village center, stumbling past a row of thatched- roof houses, my breath coming fast and hard.

I spun around and saw Youngsoo running along the bank. He stopped short before crashing into me.

“What are you doing here? Were you sent home? Was it the wet scarf? Are they putting us on a list?” I asked, my voice rising with panic.

“No, something amazing happened!” Youngsoo’s eyes shimmered like the river, and he practically sang the words: “We don’t have to go to school anymore!”

My stomach clenched. “What do you mean, Youngsoo? That’s impossible.”

“Comrade Cho told the whole class that ‘because of the current situation, there will be no school until further notice,’ ” he said, carefully repeating his teacher’s words. “He even said that ‘today will be a day to go down in history.’ ” Youngsoo jumped high in the air, hollering and hooting at his sudden change in luck. “No more school! No more school!”

My palms turned cold and clammy.

We walked past streams flowing into rivers, then through plains and pastures until we could see the rice- straw roof of our home. The house was square-shaped to block the bitter winds cascading down the mountains in winter, and it sat squat in the countryside, fifty miles north of Pyongyang, the capital. Although it looked like every other farmhouse in the valley, it was unmistakably home, the rounded edges of the worn, thatched roof hugging the house like a mushroom cap. Around it, fields of corn and millet stirred in the hot wind.

We hurried inside. A broadcaster’s voice and the hiss of static rushed to greet us. I set the basket down and stepped into a pair of house slippers.

Abahji sat as motionless as a rock, leaning in to the radio. Deep lines creased his forehead. I had never seen our father look so grave.

Beside him, Baby Jisoo looked up from a pile of clean clothes, yawned once, then went back to his favorite pastime: pulling socks over each of his feet.

Youngsoo and I sat on the floor beside Abahji. I quieted my breathing to hear, but I couldn’t understand the announcer’s words through the heavy static. I turned to Youngsoo and shrugged, unable to explain Abahji’s pensive face.

All at once, the signal cleared, and Youngsoo’s eyes brightened as if he had just solved a riddle.

“That’s what my teacher was talking about. That’s the reason there will be no more school!” he shouted, pointing at the radio. “War! War! Starting today, we are at war!” 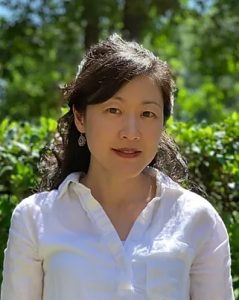 Julie Lee graduated from Cornell University with a degree in history. After working in market research in Manhattan for over ten years, she decided to pursue writing full-time. Currently, Julie lives in Georgia with her husband and three children. When she is not spending time with her family, she is working on her next book while pursuing an MFA in Writing for Children and Young Adults at the Vermont College of Fine Arts. Brother’s Keeper is her debut novel.

3 winners will receive a finished copy of BROTHER’S KEEPER, US Only.