After a deal with loan sharks sours, Darlene’s brother is permanently transformed into a chipmunk. Not one to accept impossibility as a good excuse for failure, she’s determined to rescue her brother and secure revenge against those who’d poisoned him with grade-a transformatives.

If she wants to perform a miracle, she’ll need to join forces with a divine, but the man upstairs and his angels refuse to help.

None of the other so-called benevolent divines are willing to help her, either.

Running out of time and options, Darlene prepares to storm the gates of hell for her brother.

She never expected to fall in love with the Devil.

Warning: this novel contains a woman with a chip on her shoulder, humor, and one hell of a hero. Proceed with caution. RJ Blain suffers from a Moleskine journal obsession, a pen fixation, and a terrible tendency to pun without warning.

In her spare time, she daydreams about being a spy. Her contingency plan involves tying her best of enemies to spinning wheels and quoting James Bond villains until satisfied.

Thank you so much for hosting me!

About twenty journals for writing new books, three e-readers, an iPad Pro, a few pens, earrings, more earrings, the charge base for my phone, and Neosporin, because I’m very good at damaging myself. My nightstand is in a precarious position right now.

I should probably clean that…

I totally fan Ilona Andrews and Faith Hunter, and they both know it.

I do whatever is needed to get the story finished, truth be told. Sometimes, I have 80+ pages of notes to write an 80,000 word novel. Sometimes, I start with a vague idea, and the book just pops out of my brain, fully formed and ready to take over the world.

Cockwombles is my current favorite word of the day. When in doubt, calling the object of my irritation a cockwomble will turn my mood right around.

I’m also a fan of serendipity, defenestration, exsanguination, and abhor.

I also love my kitties, Zazzle and Princess. Zazzle is the calico, and Princess is the diluted tortie. In this picture, they were getting their vaccinations at the vet, Princess had retreated into the smaller of our two carriers, and Zazzle could not handle being separated from her adoptive sister, so she crawled into the carrier, too.

They delayed the rest of their examination because everyone in the room was laughing so hard.

Look at those faces, accusing us of such terrible, horrible betrayal… and expecting us to rescue them and take them home. (Which we did.) 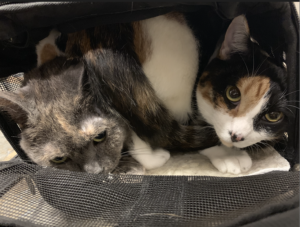