ELEANOR, ALICE, AND THE ROOSEVELT GHOSTS

I am thrilled to be hosting a spot on the ELEANOR, ALICE, AND THE ROOSEVELT GHOSTS  by Dianne K. Salerni Blog Tour hosted by Rockstar Book Tours. Check out my post and make sure to enter the giveaway! 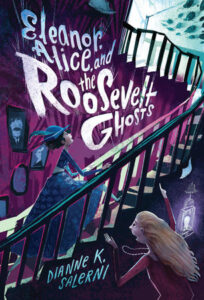 It’s 1898 in New York City and ghosts exist among humans.

When an unusual spirit takes up residence at the Roosevelt house, thirteen-year-old Eleanor and fourteen-year-old Alice are suspicious. The cousins don’t get along, but they know something is not right. This ghost is more than a pesky nuisance. The authorities claim he’s safe to be around, even as his mischievous behavior grows stranger and more menacing. It’s almost like he wants to scare the Roosevelts out of their home – and no one seems to care!

Meanwhile, Eleanor and Alice discover a dangerous ghost in the house where Alice was born and her mother died. Is someone else haunting the family? Introverted Eleanor and unruly Alice develop an unlikely friendship as they explore the family’s dark, complicated history. It’s up to them to destroy both ghosts and come to terms with their family’s losses.

Told from alternating perspectives, thrills and chills abound in Dianne K. Salerni’s imaginative novel about a legendary family and the ghosts that haunt their secrets.

“A spooky, fast-paced, and inventive tale. Salerni expertly blends fact and fiction, providing a glimpse of Eleanor and Alice Roosevelt’s childhood that is so compelling, you almost wish the ghost parts were true.”—Erin Bowman, Edgar Award–nominated author of Contagion and The Girl and the Witch’s Garden 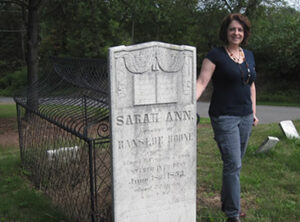 Dianne K. Salerni is a former elementary school teacher living in Chester County, Pennsylvania with her husband and two daughters.

Dianne’s first novel, We Hear the Dead (Sourcebooks 2010), recounts the true story of Maggie Fox, a teenaged girl credited with the invention of the séance in 1848. A short film based on We Hear the Dead and titled The Spirit Game premiered at the 2013 Cannes Film Festival.

Her second novel, The Caged Graves (Clarion/HMH 2013), is inspired by a real historical mystery in the mountains of Pennsylvania and was named a Junior Library Guild Selection, a finalist in the Tome Society IT List, and a Best YA Historical Novel for 2013 by BookPage.

The Eighth Day, a middle grade fantasy about a secret day of the week, is the first in a series by HarperCollins, which also includes The Inquisitor’s Mark (Book 2) and The Morrigan’s Curse (Book 3). The Eighth Day has been featured on state reading lists in Florida, Georgia, Virginia, Maine, Minnesota, and Indiana.

Photo taken at the grave of Sarah Ann Boone in Catawissa, Pennsylvania

3 winners will receive a finished copy of ELEANOR, ALICE, AND THE ROOSEVELT GHOSTS, US Only.