I am thrilled to be hosting a spot on the LAZARUS by Maryanne Melloan Woods Blog Tour hosted by Rockstar Book Tours. Check out my post and make sure to enter the giveaway! 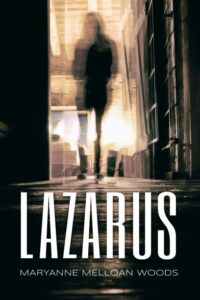 Margo and Hank are two teens in tiny, god-forsaken Lazarus, Nebraska. They have a profoundly deep relationship; the only hitch is that Hank has been dead for two months. Somehow he has remained in limbo— no doubt due to the sheer force of their love, and unfinished work to be done.

When the pair get tangled up investigating the latest local murder— with Margo doing the everyday detective work and the late Hank spying on suspects unseen—they discover nothing and no one in Lazarus are as they seem. The investigation becomes more dangerous, and it’s up to Hank to protect Margo—as much as a ghost-bodyguard-boyfriend can. While clinging to each other, the teens uncover the sinister secrets of the people they’ve known all their lives, reopen the cold case of Margo’s mother’s death, and learn how to face their past—and how to move on.

I hop down the last steps and swing into the kitchen where my dad’s at the stove, already in his uniform. A strapping, gray-templed police officer focused lovingly on bacon—it’s almost comical. Except it’s not.

“It’s for you!” he insists. “You need a good breakfast on the first day of school.”

His blue eyes are so determinedly cheerful, so rumply Dad-ish, I could almost believe him.

I love this man. It’s been me and him, Team Pierce, slaloming life’s curves together for seven years now. Picking each other up when we fall. Co-dependent in the best possible way. Which is why I say, dripping skepticism, “Uh-huh. Except I don’t eat bacon and you know that. So then you say, Well, it’s already cooked. I might as well eat it. Right?”

At this, he actually looks like he might cry, which is saying something for a police chief who can lift a pickup truck off a stray calf. I feel bad, but Dr. James has him on a strict low cholesterol diet and I am the Enforcer. If I don’t do it, who will? I will not have him joining my mother anytime soon.

He turns off the stove and dumps the bacon and grease into the trashcan, grumbling the whole time. I get us both some whole grain cereal, which he looks at like it’s the Black Death. I try to distract him.

“So, I bet you’re glad summer’s over,” I offer, sitting down. Dad’s always called summer “stupid season” in Lazarus. Firework injuries, diving board mishaps, 101 things that can go wrong at a barbecue.

“Well, there was one big event in Lazarus this summer,” says Hank from the doorway. He’s leaning casually on the door jam, like he’s not being an idiot.

Goddamnit. I shoot him a look but he keeps going.

“Come on, it even made the Norfolk Daily News. Right between the Beef Council report and ‘Teens Deface Dairy Queen.’ I wish my mom had given ’em a cooler picture, and really, ‘honor student’ was a bit of a stretch…”

Oh no. Here comes the worried look again. It’s like the stress lines in his forehead just deepened. I blew it.

“Margo, why are you talking to Hank?”

Across the room, Hank shrugs—oops.

Dad’s look shifts from worry to gentle sadness. “Honey, you have those counseling meetings set up, right? Did that first one help at all?”

I touch his arm, offer my most reassuring smile. “Dad, I’m fine.”

He’s not buying it. He leans in, fixes me with the laser blue Chief Roy Pierce stare.

“You’re talking to Hank at the breakfast table, Marg. And he’s been dead for two months.”

Hank hangs his head, a wave of toffee-brown hair falling over his glasses. He forgot he was dead again—he does that sometimes—and just jumped into the conversation.

I could tell my Dad, No, really, he’s actually here. As here as you and me. Because I believe he really is. I’m just the only one who can see him.

But that’s not going to fly. So I just smile my weak Grief Girl smile and look down at my orange and magenta ensemble,

which isn’t hiding anything. 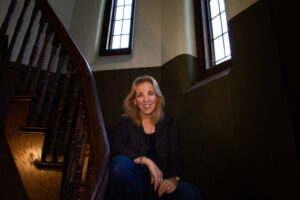 Maryanne Melloan Woods is a novelist/ screenwriter/ playwright currently living in the New York area. She received a B.A. in Theatre Arts from Drew University and an M.F.A. in Screenwriting from the American Film Institute in Los Angeles.

As a TV writer/producer, Maryanne has written shows for networks including Showtime, NBC, ABC, Fox, the WB, Nickelodeon and ABC Family.

Maryanne’s plays have been produced by HBO’s New Writers Project, the Mark Taper Forum, and many theatres around the country. Maryanne has won the New England Theatre Conference’s John Gassner Playwriting Contest and the Venice (CA) Playwrights’ Festival. She also received a playwriting grant from the New Jersey State Council on the Arts. Her play, Smells Like Gin, was the first play produced by Writers Theatre of New Jersey, and she recently won “Best Comedy Script” in the Nashville Film Festival’s screenwriting competition for her screenplay Steve.

She has taught screenwriting at the Gotham Writers Workshop in New York, UCLA and the American Film Institute, and served as a panelist for TV writing seminars at NYU and the University of Wisconsin. Maryanne was also a mentor/teacher for The Unusual Suspects, a playwriting workshop for at-risk teens in L.A.

Maryanne is represented by Liza Fleissig of Liza Royce Agency.

2 winners will receive a Finished Copy of LAZARUS, US Only.