I am thrilled to be hosting a spot on the TREETOPS by Peter Bremer Blog Tour hosted by Rockstar Book Tours. Check out my post and make sure to enter the giveaway! 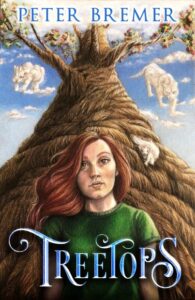 Read for FREE with A Kindle Unlimited Membership!

What would you do if you lost the one thing that matters the most?

Teenager Jackie Ashmore is struggling with the passing of her mother and angry over a cross-country move to Minnesota when she receives an unexpected birthday present that opens up a remarkable fantasy world where creatures from the past and the present coexist. Aided by unlikely animal allies and an aging guardian named Nimbus, Jackie embarks on a desperate rescue mission to save her little brother Dustin who has been kidnapped by a hooded rider and stolen across the clouds. Forced to grow up, Jackie must overcome her own fears and navigate a strange land as she journeys towards a confrontation with a mysterious power named Samuel Flood, who is using the boy for his own hidden purposes. With time running out and unbearable losses mounting, Jackie faces ever tougher choices that will determine not only the fate of her brother, but possibly the Earth below as well.

I’m assuming you are interested in books and not my alarm clock, lamp and engagement photo. I tend to do most of my reading from a Kindle these days, which I read elsewhere in the house, but I do have a small pile next to the bed. These include On the Other Side of Freedom by Deray McKesson, The Overstory by Richard Powers, and Monstress: Volume 1 Awakening by Marjorie Liu and Sana Takeda. In addition, were you to look at my kitchen table you would find the omnibus collection The Legend of Eli Monpress by Rachel Aaron, a delightful fantasy series about a wizard thief with daddy issues. The last book I read on my Kindle was Brandon Sanderson’s Warbreaker, my local science fiction and fantasy book club’s selection for August.

If you mean gush and make a fool out of myself over, I think those days are behind me. I’m far too mature and dignified for such theatrics, although if I happened to meet Stephen R Donaldson on the street I would turn into a blubbering idiot. His writing has had a huge impact on my life. Many years ago, I went to a book signing at a hotel in the Twin Cities. Neil Gaiman was there. He was a rock star dressed in black. His first novel Neverwhere had just been released. I waited in line with hundreds of other fans for my chance to meet him. Neil was so accommodating, bless his soul. He let me put his arm around him as my girlfriend took a picture. I’m sure I had the goofiest grin imaginable.

Lots of things, although I’m going to refrain from straying into political waters. If I had to pick, I would probably say someone who doesn’t treat their pet well. Whenever I see a poor dog chained up in the hot sun lying in the dirt my heart just breaks. We have a bearded collie named Jaz who drives us crazy, but we love her to death. All she wants to do is play even though she’s nine years old. Animals are such great stress releasers. No matter how bad your day is a dog is always glad to see you.

I usually have a sense of the story I’m going to tell, but I don’t know each twist and turn. It’s a little bit like driving at night; I know my destination, but I can only see a short distance ahead of me. For my novel Treetops I knew I had to get my protagonist Jackie up the tree, and I knew to a certain degree what she would find up there (both physically and emotionally), but I didn’t know how she would try to accomplish her mission. Some of the aspects of the story surprised me. I absolutely love when that happens. That’s when it feels like as an author you’re along for the ride with the wind blowing through your hair instead of slogging through wilderness with a heavy pack on.

Not particularly, although I have been known to include more obscure words just for the fun of it. I usually talk myself out of them before I’m finished. I have a short story called “The Orphans of Emerald Island” which I hope to publish next year along with several novellas and other shorter works of fiction. In that story there are more than a few strange sounding words such as oillipheist, Cnoc na Teamhrach, and Tír na nÓg since the tale I tell is a Celtic one set in Ireland.

Sure! I always love to share pictures of our Jaz. Thanks for the opportunity to share some things about myself with your listeners. 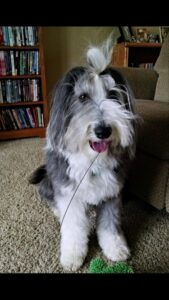 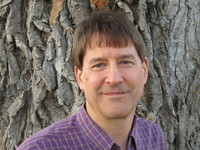 Peter Bremer is a librarian at a small college in Minnesota and the author of almost a dozen published professional articles, none of which feature dragons or unicorns or impossibly tall trees. He lives with his wife and furry dog in a very small town and believes that the world, on average, is a far better place with more nature in it, not less.

3 winners will receive a finished copy of TREETOPS, US Only.