Praise for THE BRIGHTEST NIGHT 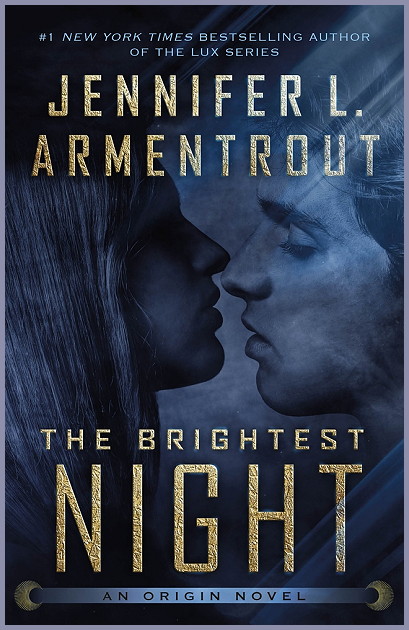 The thrills, drama, and intrigue continue in the third installment of the Origin series from #1 New York Times bestselling author Jennifer L. Armentrout.

He is the darkest star.
You are the burning shadow.
And together, you will bring about the brightest night.

Less than a year ago, Evelyn Dasher was a normal girl, living an unremarkable life.

Now, she’s on the run, under the protection of the beautiful, deadly inhuman Luc. She’s been betrayed by those who were closest to her. And she’s learned truths about herself that she never saw coming–things she once knew, and was made to forget. Truths with devastating consequences. She’s caught in the eye of the storm.

She is the eye of the storm

The name thundered through the room as I stared at the broken shards of glass from the bottle General Eaton had thrown.

I stood there, stuck in absolute disbelief, watching the amber liquid seep over papers littering the floor. Some looked like junk mail from when Houston was a bustling city. A brightly colored advertisement for a new furniture store opening downtown. A blue pack of coupons never opened. White envelopes with the word urgent in red written on them. All were evidence of a life left behind by whoever had once called this building home before the electromagnetic pulse bombs were dropped, rendering the city habitable only by those desperate enough to remain hidden in a dead zone.

Had the owners evacuated, or were they lost in the chaos that followed the EMPs like so many hundreds of thousands?

Why was I even thinking about any of that? Someone’s mail wasn’t the most pressing concern. It was like my brain shorted out at the mention of his name.

The masses knew him as the fallen war hero, a patriotic icon lost in the war protecting mankind against the invading Luxen. I’d once been a part of those masses, but I’d since learned the truth. Dasher was an evil man responsible for horrific experiments on both humans and aliens, all in the name of the “greater good.”

But he was an evil, dead man.

Nothing more than a ghost I couldn’t remember, because his wife had shot him. The same woman I’d believed to be my mother up until I’d learned I wasn’t really Evelyn Dasher but a girl named Nadia Holliday. Which was roughly around the same time I’d gotten smacked upside the head with the knowledge mother dearest was also a Luxen.

Sylvia had married a man responsible for forced pregnancies between Luxen and humans, nonconsensual mutations, kidnappings, murders, and the subjugation of her own people. Not only that, she had worked for the institution responsible.

You can purchaseThe Brightest Night at the following Retailers: 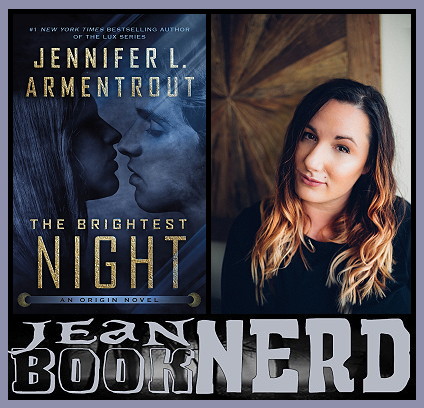 JENNIFER L. ARMENTROUT is a #1 New York Times, USA Today, Amazon, iBooks, and international bestselling author of the Lux series and other books for teens and adults. She is a #1 bestseller in Germany and Italy, and a top seller in markets around the world. Her young adult novels have sold over a million copies since 2011 in the US alone, and have been finalists for the Goodreads Choice Awards and many others. Jennifer lives in West Virginia with her husband and dogs.