I am thrilled to be hosting a spot on the SHADOWS OF ATLANTIS: SYMBOSIS by Mara Powers Blog Tour hosted by Rockstar Book Tours. Check out my post and make sure to enter the giveaway! 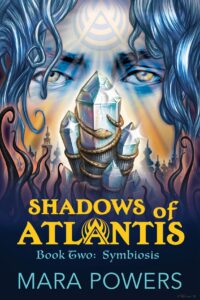 Read for FREE with a Kindle Unlimited Membership!

The memory of Brigitte’s upbringing in the Dreamclans slowly fades away as she succumbs to the lavish lifestyle of her new home. Caught in the grip of The Madness epidemic, she descends into an elixir-fueled haze. It’s the only way to silence the judgmental voices in her head. Outside the gilded walls, a looming storm encircles the city, trapping its inhabitants as they remain blind to the treachery within. Meanwhile, D’Vinid is reluctantly caught up in the unstoppable currents of fate. A harrowing encounter with the murderous Shadowmancers launches him on a perilous journey, while Symbiosis with his new soul-crystal reveals clues to the corruption of the Crystal Grid. All paths lead back into the forbidden arms of Brigitte. Is their union a beacon of hope? Or will it unleash the Shadows of Atlantis? In this eagerly anticipated sequel to Shadows of Atlantis: Awakening, Symbiosis follows the horrifying psychological descent of a falling civilization. Utopia is dying – but how can they stop what they can’t even see?

What readers are saying about the SHADOWS OF ATLANTIS Series:

“Had me turning the pages obsessively from the very beginning.” Readers Favorite 5-Star Review.

“I have a real interest in mythology after studying it in college. I had high hopes for the first in Mara Powers’s fantasy saga and I was not disappointed.” –Bookish Picks 5-Star Review

“Mysterious., alluring and so engaging, it draws you in from the very first chapter and takes you on a fast-paced journey of discovery and danger, right up to its unpredictable conclusion.” –Kickass Reads 5-Star Review

“Your king will visit you soon,” he whispered. “He asked me to prepare you.”

He smoothed aromatic oil on his hands and gently rubbed it on her skin. She was unable to control the urges his touch inspired. The feel and smell of the oil kicked her senses into overload. She moaned. His hands sent electric shocks through her body. She arched her back, sinking into the arousal, hoping beyond hope that he would escalate the pleasure. When she reached a peak, he left the room. Her mind was muddled beyond measure. Floating in a state of suspended ecstasy, she had the presence of mind to pull on a robe before stumbling into the main parlor.

There she found Stixxus pacing. His grumbling demeanor pulled a blanket of tension over the room.

“Stixxus.” Brigitte moved closer, stumbling in the sensual fog. She stared at the ripple of his muscles. Desire consumed her until she reached to touch his skin. He grabbed her hand. “Your Majesty.

Breathless, she collapsed into his arms, running her lips on his bare bicep. The salt of his skin ignited her passion even further.

“Please. Take me.” She pressed her body against his.

He pushed her to arm’s length. Having seen the mixologist leave her room, he knew she had been drugged with the aphrodisiacs.

Such was the way of things in Atlantis. “Your Majesty, the Fury League has defected from the king’s order. This means I am no longer under the order of the trident. I must report to the Warrior Sect.”

Brigitte creased her brow. The haze of desire, though overwhelming, began to dissipate. The meaning of his words sank in.

Stixxus watched her eyes for signs of understanding. “The king is accused of lying and deceiving the people. The Warrior Sect is unable to break the codes of honor.” He gazed on her pleadingly. “I don’t wish to leave here.” He squirmed, stealing a look at the shape of her body through the thin robe she wore, contemplating her pleas.

“Then don’t leave. Perhaps it will work itself out.” She forced herself to walk toward the balcony overlooking the private sanctuary below. “My brother has not yet returned. You and Alondriss are all I have.” She turned to face him. “I am not the king. Perhaps my order is still legitimate.”

He was stunned by her regal beauty. There was no way he could refuse her. Sighing, he sank to one knee. “Forgive me, my queen. I will obey your wishes. I will inform my league-master that I wil stay with you as a mercenary.”

A shadow fell over the entry foyer, and they both turned their attention to the intruder.

“You have a good point, my queen.” The voice of King Kyliron sent a chil across the room. “Perhaps the furies will listen to your order.” He joined her on the balcony, waving toward Stixxus. “I would like to be alone with my mate now,” he brushed a chilling glare over the warrior.

Stixxus did not bow. He merely planted his feet firmly on the ground, hands folded behind his back, eyes fixed on Brigitte. “I answer to the queen alone.” The warrior’s gravel voice creaked darkly.

Kyliron raised an eyebrow. “You do inspire the people,” he leaned closer to Brigitte, inhaling the intoxicating aroma of the oil on her skin. “The furies may have shunned my rule, but you are still my queen.”

The arousal turned to pain. She had to have one of them if not both. With a gulp, she gestured to the warrior. “Stixxus, please retire to the corridor as sentry.” 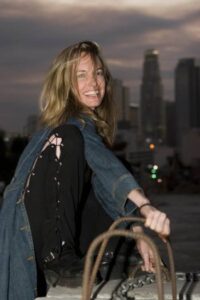 Mara Powers is a rebel of the written word who has tackled the monumental task of recreating Atlantis. When she was 16 in Fort Collins, Colorado, she began visiting the library in search of things she couldn’t learn in school. Her goal was to re-define her religion. She studied theology voraciously until she discovered the concept of reincarnation though Hinduism. It was the answer to a lifelong existential crisis that had plagued her for many sleepless nights. The study of reincarnation led her to the channel Edgar Cayce. In his many books, she found his past life readings of lifetimes spent in Atlantis. This was the beginning of a lifelong quest to unravel the secrets of this mystery. She has spent upwards of 30 years exploring the labyrinth of ancient civilizations. Her decision to turn it all into a high concept, visionary fantasy series stems from her study of the esoteric depiction of Atlantis. With the other half of her research rooted in the secular, it was the best way to illustrate both aspects of this fascinating legend. Her work is the legacy of the legend.

1 lucky winner will receive an audiobook download from Audible, International.