I am thrilled to be hosting a spot on THE ANCESTOR by Lee Matthew Goldberg Blog Tour hosted by Rockstar Book Tours. Check out my post and make sure to enter the giveaway! 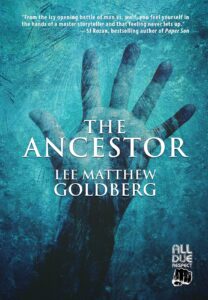 A man wakes up in present-day Alaskan wilderness with no idea who he is, nothing on him save an empty journal with the date 1898 and a mirror. He sees another man hunting nearby, astounded that they look exactly alike. After following this other man home, he witnesses a wife and child that brings forth a rush of memories of his own wife and child, except he’s certain they do not exist in modern times-but from his life in the late 1800s. After recalling his name is Wyatt, he worms his way into his doppelganger Travis Barlow’s life. Memories become unearthed the more time he spends, making him believe that he’d been frozen after coming to Alaska during the Gold Rush and that Travis is his great-great grandson. Wyatt is certain gold still exists in the area and finding it with Travis will ingratiate himself to the family, especially with Travis’s wife Callie, once Wyatt falls in love. This turns into a dangerous obsession affecting the Barlows and everyone in their small town, since Wyatt can’t be tamed until he also discovers the meaning of why he was able to be preserved on ice for over a century.

A meditation on love lost and unfulfilled dreams, The Ancestor is a thrilling page-turner in present day Alaska and a historical adventure about the perilous Gold Rush expeditions where prospectors left behind their lives for the promise of hope and a better future. The question remains whether it was all worth the sacrifice….

Praise for THE ANCESTOR:

“A story that blends the familiar and the supernatural in a manner that calls Stephen King’s work to mind. That said, Goldberg’s book possesses a flavor all its own—a distinctive mélange of the sincere and the strange.” —Kirkus Reviews

“Lee Matthew Goldberg is an animal—there is no other way to say it. His prose is heavyweight ambitious, as visceral as a sweaty-toothed dog at your throat. He evokes Robert Louis Stevenson as much as he does a modern thriller novelist. And I’ll be honest: I expected a crime novel, but I got a spell-binding epic, an epistolary revelation, a tale as rich as a paying gold mine. The Ancestor is more than a novel. It’s an ode to the rich tradition of adventure storytelling…seasoned with ample spice of love and violence and greed.” —Matt Phillips, author of Countdown and Know Me from Smoke

“In The Ancestor, Lee Matthew Goldberg masterfully weaves together a story involving family and violence set against the backdrop of an unforgiving Alaska of both past and present.” —Andrew Davie, author of Pavement and Ouroboros

“From the icy opening battle of man vs. wolf, you feel yourself in the hands of a master storyteller and that feeling never lets up.” —SJ Rozan, bestselling author of Paper Son

“This thrilling novel is rich in descriptions of the vast, snowy, and deadly wilderness of Alaska; it ably captures the type of person who chases gold.” —Foreword Reviews

“Beautifully written, and capturing the unforgiving grit of Gold Rush Alaska, Lee Matthew Goldberg’s The Ancestor is a thrilling page-turner with an ache in its heart. I’m a huge fan.” —Roz Nay, author of Hurry Home and Our Little Secret

Right now I’m writing a YA book about an up-and-coming singer, so I’ve been reading a lot of rock n’ roll novels. Destroy All Monsters by Jeff Jackson, Great Jones Street by Don Delillo and Vernon Subtex by Virginie Despentes.

He’s long gone, but F. Scott Fitzgerald has always been my favorite. I’ve learned so much about writing from reading the way he manipulates sentences.

Bad writing, cliched plots, books that get hyped and don’t live up to the hype.

Not obsessively, but I’ve definitely a plotter. I figure out a few sentences for each chapter and then kind of let it flow from there.

I use the word ‘but’ a lot. So much so that when I do a final edit, I go through and see how many times I use it and try to cut it by about half. I have no idea why, BUT I’m trying to be better about it! 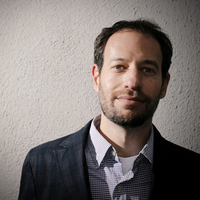 Lee Matthew Goldberg is the author of the novels THE ANCESTOR, THE MENTOR, THE DESIRE CARD and SLOW DOWN. He has been published in multiple languages and nominated for the Prix du Polar. His first YA series RUNAWAY TRAIN is forthcoming in 2021 along with a sci-fi novel ORANGE CITY. After graduating with an MFA from the New School, his writing has also appeared in The Millions, Vol. 1 Brooklyn, LitReactor, Monkeybicycle, Fiction Writers Review, Cagibi, Necessary Fiction, the anthology Dirty Boulevard, The Montreal Review, The Adirondack Review, The New Plains Review, Underwood Press and others. He is the editor-in-chief and co-founder of Fringe, dedicated to publishing fiction that’s outside-of-the-box. His pilots and screenplays have been finalists in Script Pipeline, Book Pipeline, Stage 32, We Screenplay, the New York Screenplay, Screencraft, and the Hollywood Screenplay contests. He is the co-curator of The Guerrilla Lit Reading Series and lives in New York City. Follow him at LeeMatthewGoldberg.com

3 lucky winners will receive an eBook of THE ANCESTOR, International.