I am thrilled to be hosting a spot on the RISING STAR by Michele Kwasniewski Blog Tour hosted by Rockstar Book Tours. Check out my post and make sure to enter the giveaway! 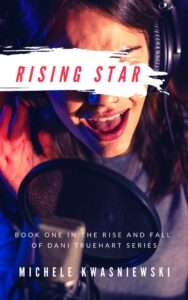 In the first book in THE RISE AND FALL OF DANI TRUEHART series, RISING STAR, fifteen-year-old Dani Truehart is living a life that is not quite her own. Driven by her mother’s desire for fame and fortune, she has spent her childhood dutifully training for a career as a pop star. On the brink of discovery, doubts begin to creep into Dani’s mind as she questions her own desire for fame, and she wonders whether she can trust the motivations of the adults who are driving her forward.

Following a brilliant audition arranged by her vocal/dance coach and former ’80s pop icon Martin Fox, Dani is thrown full-force into the music industry. She leaves her friends, family and scheming mother behind to move with Martin, who has become her legal guardian, into the Malibu compound of her new manager, Jenner Redman. Jenner, the former swindling manager of Martin’s boy band, leverages what’s left of his depleted fortune to launch Dani’s career.

Isolated from her life at home and trying to stay apace with her demanding schedule, Dani struggles to keep in touch with those she loves, connect to her withholding mother and find her voice as an artist. With Martin and Jenner at odds over their rocky past and finding herself unprepared to handle the pressures of her future singing career, Dani’s debut album and future stardom are at risk of falling apart.

It’s crowded!  I have a table lamp, a reading lamp, glasses, Lego figures and 3 small stuffed animals my son gave me, a congratulations card from my sister from when a publisher picked up Rising Star and a jar filled with shells from various trips to the beach and a candle.

Living or dead?  I would totally fan Edgar Allen Poe or Gabriel Garcia Marquez if they were alive.  Both very different styles, but their works really speak to me in different ways.  I’m a sucker for dark creepy tales and magical realism.  I read their work over and over.

Living – Ruth Ware.  I love everything about her work – her clean word style, the way she builds tension, the utter spookiness of her tales.  I would love to figure out how she builds her stories.

People sucking their teeth makes my skin crawl – it has creeped me out since I was a little girl. Also clowns scare the bejeezus out of me.

I am a fly-by-the-seat-of-my-pants kind of writer.  I love seeing where my characters take the story as I write.  I usually have an idea about the plot points I want to hit, but sometimes the story I had planned out turns out not to fit the character.  I’ve been surprised more than once when the story takes a turn and follows a new path I hadn’t expected.  It’s one of my favorite things about writing.

Right now, it’s bananas.  Before became a parent, I swore gladly and often.  But having a child has really forced me try to curb that instinct.  So instead of using my favorite expletives, I try to come up with creative ways to feel like I’m cursing, but I’m using totally normal words.  Right now, I use bananas for everything crazy, bad or messy.

NOW ON TO THE MOST IMPORTANT PART OF THE INTERVIEW:

This is my lovely mini-doxie Phoebe!  She just turned 9 nine December.  In these photos Phoebe is holding her favorite toy, ringing in 2021 on NYE, snuggling in bed and reluctantly Wearing Her Halloween Costume. 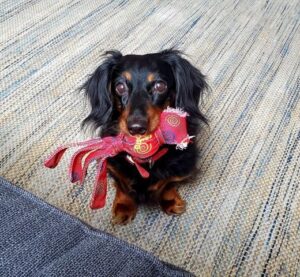 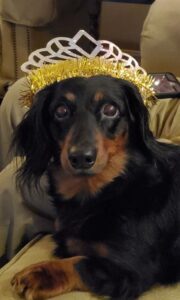 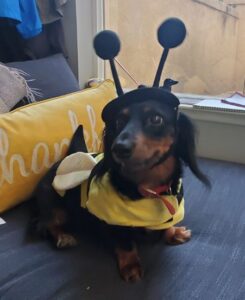 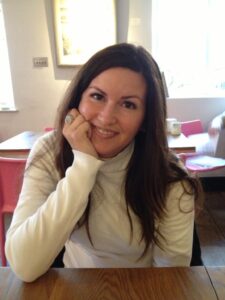 Michele Kwasniewski, is an entertainment industry insider who has seen what the Hollywood machine can do to people – having worked for many years in film and television production on such films and TV shows as Primal Fear, Independence Day, Evita, Face/Off, Big Brother, and many TCL, HGTV, and Discovery series including: Meet the Pandas, Adoption Story, Wedding Story, and Extra Yardage.

With her book, she shares the glamour and excitement of fame as well as the hard work it takes to achieve success and the price of living life in the public eye.  Everyone wants to be famous, but most people have no idea what that really means.  Michele has seen it firsthand.  She is an active member of the Producers Guild of America.

Michele’s colorful experiences in the industry inspired her to write THE RISE AND FALL OF DANI TRUEHART series. Michele lives in San Clemente, California with her husband, their son, and their disobedient dachshund. RISING STAR is her first novel.