Welcome to the Ensnared Blog Tour!

To celebrate the release of Ensnared by Ann Bausum on January 12th, blogs across the web are featuring exclusive articles from Ann, plus 5 chances to win a hardcover copy!

I’m not sure who got more excited in 2015 when my oldest son and I set off from Berlin one brisk January morning on a quest to visit the Wolf’s Lair—the site of the 1944 attempted assassination of Adolf Hitler. We departed aboard a sleek express train and spent the day transferring to a series of ever simpler rail carriages until, by twilight, we finally reached an outpost in Poland named Ketrzyn (roughly pronounced KETCH-in). The next morning snowflakes began to fall as we set out off for the former Nazi bunker. Our guided rambles around the frozen ruins of this site remain one of the most otherworldly explorations I’ve ever made.
Three years later Sam and I returned to Europe for further research. This time we homed in on the events of the Valkyrie assassination attempt and its related coup. We stood in the courtyard at the Bendler Block in Berlin where Claus von Stauffenberg and other conspirators had been shot, found our way to the execution chamber of Plötzensee Prison, and made a pilgrimage to the Borntal detention site on the edge of Bad Sachsa. Together we walked the grounds, studied the vacant houses where the Nazis had confined 46 children of the conspirators, and, with permission, explored the abandoned corridors and living spaces inside one of them.
Everywhere we went I felt the echoes of history. Then I met it face to face.
During a series of in-person visits and phone calls I had the privilege of interviewing people who had lived through the history I was exploring. Through these conversations I gained insights not only into their interactions with the past but the ways in which these experiences continued to reverberate through their lives and those of their family members. Our visits were a reminder that history isn’t an abstract collection of isolated events from the past. It is a legacy that surrounds us and endures long after places like the Wolf’s Lair fall into ruin.
We all share in the echoes of history.

February 11th – From the Mixed-Up Files 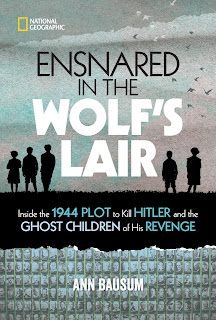 Buy: Amazon | Indiebound | Bookshop
Add on Goodreads
Follow National Geographic Kids: Website | Twitter | Books Twitter | Facebook | Youtube
Follow Ann Bausum: Website | Twitter | Facebook
“I’ve come on orders from Berlin to fetch the three children.” –Gestapo agent, August 24, 1944
With those chilling words Christa von Hofacker and her younger siblings found themselves ensnared in a web of family punishment designed to please one man—Adolf Hitler. The furious dictator sought merciless revenge against not only Christa’s father and the other Germans who had just tried to overthrow his government. He wanted to torment their relatives, too, regardless of age or stature. All of them. Including every last child.
During the summer of 1944, a secretive network of German officers and civilians conspired to assassinate Adolf Hitler. But their plot to attack the dictator at his Wolf’s Lair compound failed, and an enraged Hitler demanded revenge. The result was a systematic rampage of punishment that ensnared not only those who had tried to topple the regime but their far-flung family members too. Within weeks, Gestapo agents had taken as many as 200 relatives from their homes, separating adults and children.
Using rare photographs and personal interviews with survivors, award-winning author Ann Bausum presents the spine-chilling little-known story of the failed Operation Valkyrie plot, the revenge it triggered, and the families caught in the fray. 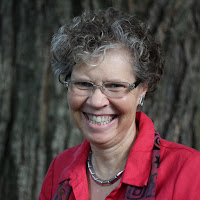 ANN BAUSUM is an award-winning children’s book author who brings history alive by connecting readers to personal stories from the past that echo in the present day. Ensnared is her 11th book for National Geographic Kids and her fourth look at international history. While researching the book, she traveled twice to Europe to get to know the people and places that became intertwined in 1944 after the failed effort to kill Hitler at the Wolf’s Lair. Previously Bausum has explored international history with such works as Stubby the War Dog; Denied, Detained, Deported; and Unraveling Freedom. Many of her books highlight themes of social justice, including her National Geographic title The March Against Fear. In 2017, her body of work was honored by the Children’s Book Guild of Washington, DC. Individual titles have won numerous starred reviews and been recognized with a Sibert Honor Award, the Jane Addams Children’s Book Award, the Carter G. Woodson Award, and the SCBWI Golden Kite Award, among other distinctions.