Welcome to the You Were Made for Me Blog Tour!

To celebrate the release of You Were Made for Me by Jenna Guillaume on April 1st, blogs across the web are featuring original content from Jenna, as well as 10 chances to win the hardcover!

You Were Made for Me Excerpt

This is an excerpt from You Were Made for Me. It’s one of the first scenes that came to me after I got the initial idea for the book. In it, Katie is slowly figuring out what has happened—that the boy she and her friend Libby joked about creating has actually sprung to life and is now in her bedroom in the middle of the night, completely naked. Her next-door neighbor, Theo, has heard her screams of surprise and dashed over ready to defend her. He is NOT expecting what he finds. This moment was a lot of fun to write, and I hope it’s just as enjoyable to read!

Theo and I were moving as quietly as we could through my house. We paused when we reached my open bedroom door, pressing our bodies against the hallway wall.

There was silence in my room. All I could hear was the sound of mine and Theo’s breathing. We exchanged a look.

“Anybody in there?” Theo called out. His voice came out about three octaves higher than usual.

“If you were a burglar or murderer, would you respond to a question like that?” I hissed.

Theo looked back at me, a finger to his lips. His eyes widened when we heard—no way…was that…a giggle?

A moment later, there it was again. Definitely a giggle.

Theo and I stared at each other, our faces twitching in silent communication. After a moment he shrugged as if to say, Here goes nothing. He rounded the corner into my room in one quick movement, swinging the plastic bat in front of him and bellowing a wordless war cry. I followed him, slamming on the light and sticking the paintbrush out in front of me like it was a fencing sword. Theo’s scream died on his lips, and I let out a gasp as we both registered what we were seeing.

I don’t know what Theo thought we’d find when we entered the room. I’d had all sorts of visions flashing through my head, all of them dark and awful.

I can tell you that neither of us were expecting what we actually saw.

There, by my bed, was a bronzed, muscular guy with floppy blond hair. He was crouched down, laughing softly to himself, as he scratched at Max’s sides. My oh-so-effective guard dog was absolutely smothering the guy’s face in kisses, his tail wagging furiously.

Straightening up and pushing Max gently away, the guy said, “There you are, gorgeous.” I instinctively looked around. Theo had a stunned expression on his face. Was this guy talking…to me?

His voice was husky. And hot. Or at least it would have been if he wasn’t some rando who’d shown up in my room in the middle of the night, butt-naked.

Yeah. Did I mention he was naked? Because he was.

I tell you what, if you had’ve told me at the start of that day that I’d wind up with two half-naked and/or totally naked guys in my bedroom that night, I would’ve said you were dreaming.

For a moment, I thought I was.

“Listen, perv, we’ve called the cops, so you better get the hell out of here right now.” His words were confident, but I could hear the tremor in his voice.

The naked guy took a step forward, and Theo flicked the bat in his hand toward him in a threatening way. “Don’t—don’t come any closer,” he said.

“Is this guy bothering you?” The naked guy said. To me.

Theo glanced my way. “You’re the only one who’s bothering her, mate.”

The guy stood up straighter. He towered over Theo. “Me?” He made a scoffing noise. “I would never bother her.”

“Leave now, and no one has to get hurt, alright.”

“Kate, who is this boy? Do you want me to get rid of him for you?” This was from the naked guy.

“Uhhhh,” I squeaked out. I’d been standing there with my mouth hanging open during the whole exchange, trying to take in what was happening. My brain was having a hard time processing it.

“How do you know her name?” Theo said, his voice raised. Quieter, he said to me, “Shit, is he some weirdo stalker?’”

Glasses. I needed my glasses. A suspicion had sprung up in my mind that definitely didn’t seem possible. It’d been planted there by the whiff of scent I’d got when the naked guy had moved.

The smell of springtime.

I dropped the paintbrush and held out my hands in a calming gesture, like the guy was some kind of wild animal. I slowly moved around the edge of the room toward my bedside table.

“What the hell are you doing?” Theo hissed.

I didn’t answer. I didn’t take my eyes off the guy in front of me. Max was still at his feet, his tail wagging, like he’d found his new best friend. It was as though he hadn’t even registered Theo’s presence in the room, let alone mine.

I felt around on my bedside table for my glasses and slipped them on. They were still wonky, but they did their job. The room came into focus, and I got a proper look at the naked guy for the first time. He was scratching his head, his face placid, like he didn’t really have a care in the world.

And why would he, when he looked like…well, like a long-lost Hemsworth brother? He moved his hand away from his head, and his hair settled smoothly into place. Just right. His eyes, which were looking at me with warmth and—was that affection?—were the clear blue of a summer’s day. His lips, which he gently nibbled as my gaze lingered on them, were soft and pink.

His body…well, let’s just say it was pretty damn flawless.

Except for one tiny thing.

No, not that thing.

I was doing my best not to look at that thing, thank-you-very-much.

It was something else altogether.

The guy. He didn’t have a belly button.

He had a six pack to die for. That hot V thing at his hips.

But between them…nothing. Just smooth skin. No belly button. 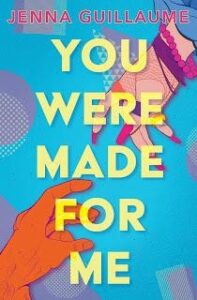 “Plenty of early 2000s rom-com vibes and lighthearted mishaps… Guillaume’s cinematic story weaves together beloved romantic comedy tropes touched with magic—or is it science?—and drops them into a fresh, contemporary setting. Despite the playful tone, this isn’t without nuance, taking on serious topics such as male body image, friendship, and asexuality.” —Booklist

YA author Jenna Guillaume is back with a fun and modern feminist twist on the 1985 pop cult film Weird Science.

Sixteen-year-old Katie Camilleri can’t believe she’s accidentally created a teenage boy. A boy six-feet tall with floppy hair and eyes like the sky on a clear summer’s day. A boy whose lips taste like cookie dough and whose skin smells like springtime. A boy completely devoted to Katie. But silly musings and kitchen antics with her best friend, Libby, have definitely taken a whimsical twist into something bigger than Katie could have ever daydreamed. Turns out the consequences of fumbling a human being into existence are rather complicated. More importantly, does Guy, the golden Adonis Katie’s created, like her because he wants to, or because he has to? And will he be Katie’s very first kiss?

From the author of What I Like About Me comes a hilarious feminist twist on a classic narrative, loaded with laughs, mishaps, and plenty of 80s and 90s pop-culture callbacks. Jenna Guillaume’s entertaining romantic comedy novel features a humorous and relatable voice and will appeal to fans of Jenny Han.

About the Author: Jenna Guillaume was the editor-at-large for BuzzFeed Australia, where she wrote about very important things like pop culture, identity, feminism, social media, and Chris Hemsworth’s biceps. Previously, she spent more than half a decade in the features department of Girlfriend magazine, editing the sealed section (yes, all those questions are real), and writing about everything from bullying and body image to bad kisses and boy bands. She was also a contributor to Girlfriend Life Hacks, an essential guide to navigating a girl’s completely-awkward-but-totally-awesome teen years.