Praise for IT DOESN’T TAKE A GENIUS

“When everyone’s a star, it’s hard to stand out. African American E―who’s not named after Emmett Till, thank you very much―is used to being the cheerful sidekick to big brother Luke, but Luke has different ideas. He’s gotten a scholarship to a boarding school in Maine, and this summer he’ll be a junior counselor at DuBois, a historically Black summer camp that is a little bougie. Thirteen-year-old E has been trying to dissuade Luke by reminding him how many horror movies are set at boarding schools and summer camps, but Luke is clearly ready to step out on his own and dive into his visual art. E takes matters into his own hands by secretly applying for and getting into DuBois. He soon learns that while he may be a debate team star and talented break dancer at home, everyone at DuBois is exceptional―and they all seem to be better versed in Black excellence than he is. He quickly learns to keep his mouth shut and Google later when it comes to names he doesn’t recognize, like Toni Morrison and Marcus Garvey. E feels hopelessly shy and uncool, shining only when it comes to dance. His relationship with Luke becomes strained, with Luke wanting to break free of his little brother while E is desperate to maintain their connection. The cast of characters is fully realized, distinct, and absolutely lovable, and E’s journey will resonate. An exceptional novel with broad appeal.” —Kirkus Reviews (Starred Review)

“Defining Black identity is central to Rhuday-Perkovich’s endearing coming-of-age story, and a rosy ending wraps up this account of Black boy joy nicely. Readers seeking books with BIPOC protagonists like Pablo Cartaya’s The Epic Fail of Arturo Zamora will enjoy this selection as well.” —Booklist

“This is a great book to add to lists of titles that showcase Black joy!….Summer camp books are always possible, and I loved all of the information about Black culture and history….this is primarily a humorous, fun book.” —Ms. Yingling Reads 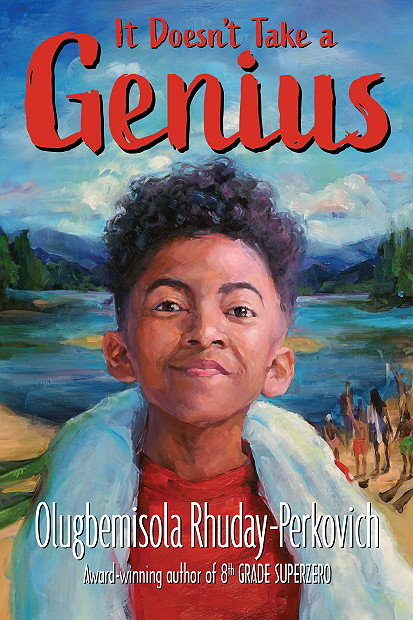 Emmett and his older brother Luke have always been “Batman and Robin,” though they’re quick to bicker about who’s who. Spending the summer at a historic Black summer camp seems like a wonderful adventure for the two to share, but since Luke is there as a junior counselor, he seems to spend all of his time being everyone else’s big brother, and ignoring Emmett.

As Luke seems to be moving on to new adventures, Emmett struggles in unexpected ways, especially in swim class and the “It Takes A Village” entrepreneurship class. Without his brother to turn to for support, Emmett works to build a new crew of “superfriends,” who’ll help him plan something spectacular for the end-of-camp awards night and celebration. Along the way, Emmett learns that no matter what, there can be many ways to define family.

You can purchase It Doesn’t Take a Genius at the following Retailers: 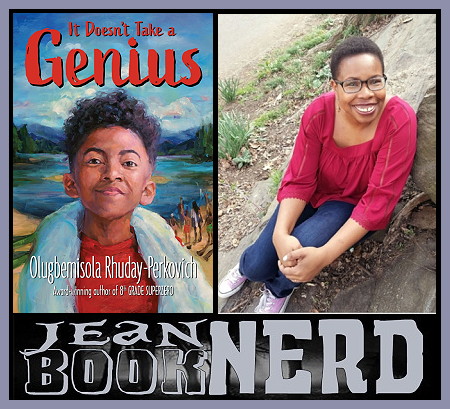 Olugbemisola Rhuday-Perkovich is the author of 8th Grade Superzero, which was named a Notable Book for a Global Society, Alice’s Adventures in Wonderland, an adaptation for Sesame Workshop’s Ghostwriter, and Operation Sisterhood. She is the coauthor of NAACP Image Award nominee Two Naomis, a Junior Library Guild selection, and its sequel, Naomis Too. She also writes nonfiction, including Above and Beyond: NASA’s Journey to Tomorrow, Someday is Now: Clara Luper and the 1958 Oklahoma City Sit-Ins, and Saving Earth: Climate Change and the Fight for Our Future.

Olugbemisola is a member of the Brown Bookshelf, editor of the We Need Diverse Books anthology The Hero Next Door, and teaches at the Solstice MFA Program in Creative Writing. She holds an MA in education, and has written frequently on parenting and literacy-related topics for PBS Parents, Brightly, American Baby, Healthy Kids, and other outlets.