I am thrilled to be hosting a spot on the GEMS OF FIRE by Diane E. Samson Blog Tour hosted by Rockstar Book Tours. Check out my post and make sure to enter the giveaway! 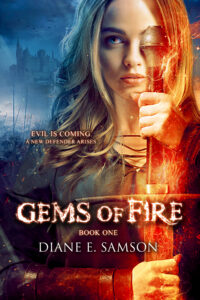 Kindle Unlimited members will be able to read this for FREE!

Reeling from Jack becoming king of Oclen, Princess Anna returns home as Sunderland’s Defender. Earning her title was a hard-fought honor, but Anna can’t escape the guilt of leaving Jack alone in that cursed, starving place.

When Jack comes to Sunderland seeking aid from Anna’s father, she must decide whether to return with him and help defeat the curse plaguing the cold northern land. If she remains Sunderland’s Defender, she knows her heart would never forgive her for abandoning Jack to rebuild a crushed kingdom.

Can Anna leave what she loves to become queen of a people suspicious of her and the gems? Joining Jack would mean battling an evil greater than anything she’s ever faced, for the curse’s roots grow deep. But if she doesn’t, Oclen will likely fall and Anna will lose Jack forever. 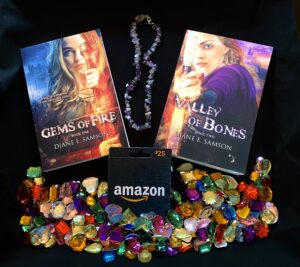 Kindle Unlimited members will be able to read this for FREE!

Princess Anna is left to rule Sunderland as regent when her father, brother and her presumed fiancé Jack ride to battle devouring creatures in Jack’s home kingdom of Oclen. She must establish herself as a strong leader with the Sunderland council and a neighboring king who brings along two handsome princes to negotiate an alliance.

Trouble erupts as outlining Sunderland villages are attacked by pillaging marauders and the council loses confidence in Anna’s leadership. As Anna waits in trepidation for word from her father’s army, all she hears is silence. Her scouts never return. When the reports of a coming horror reach Anna, she forges an unlikely alliance and forgoes her father’s long-standing policies against gems of power. She trains Sunderland’s remaining soldiers to fight with gems. She’ll lead them to battle to rescue her family and the one she loves.

But first she must survive the treachery brewing in her own court.

Start reading the series now for .99 or Kindle Unlimited members will be able to read this for FREE!

Palace of Sunderland. Paradise to the peasants. Prison to sixteen-year-old Anna, daughter of the king. She can never escape the castle’s cold walls and scorning disapproval of her father and his brute royal counsel, Seamus. She’ll always live in the shadow of her late mother, the queen. Will they ever see her for who she really is?

A riding accident lands Anna in the hands of traders who sell her as a slave in distant Kasdod to none other than her father’s enemy, Lord Anwar. After overhearing a dangerous plot to conquer Sunderland and kill the royal family, Anna must escape and warn her father, even if it means facing her greatest enemy.

With the doom looming over her, Anna is approached by a dangerous man in the dark. He claims to want to help her, but can she trust him with her secrets? The perils of the journey ahead will push Anna to the limit and answer the one question that has always plagued her…

Will she ever be enough? 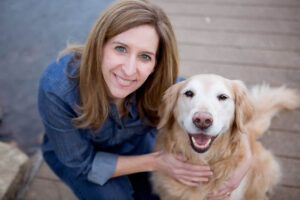 Diane E. Samson grew up on acreage just north of Kansas City, Missouri, with horses and dogs in the backyard. She later pursued her love of words and earned a degree in magazine journalism from the University of Missouri-Columbia. After graduation she worked as a reporter, managing editor, freelance writer and in public relations. After moving around the country, she’s recently returned to the Kansas City area where she lives with her husband, children and golden retriever.

She’s written fiction off and on her whole life. Gems of Fire is her first series about a girl traveling a journey of self-discovery in a world of powerful gems, supernatural forces, epic battles and of course, handsome heroes.

1 winner will win signed copies of all three books, a purple gem necklace, a $25 Amazon gift card and three bookmarks, US Only.