I am thrilled to be hosting a spot on the ARCHIBALD LOX VOLUME 2: ARCHIBALD LOX AND THE KIDNAPPED PRINCE by Darren Shan Blog Tour hosted by Rockstar Book Tours. Check out my post and make sure to enter the giveaway! 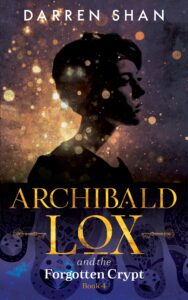 When a couple of assassins catch up with Archie, he’s forced to flee to the Merge in search of friendship and safety.

As his skills develop, he opens a gateway to a long-forgotten crypt, where ancient secrets are revealed.

In a city of ice, the greatest gropsters of the six realms have assembled for a legendary Tourney, but a small group of plotters are more interested in kidnapping…

This is the first of three books in VOLUME TWO of the series.

The Tourney has kicked off, and it’s the biggest draw in the Merge.

Archie has a ticket to every match, and is soon caught up in the excitement.

But when a scheming king sets his sights on the young locksmith, all thoughts of grop are swiftly forgotten, and Archie might fight for his freedom and his sanity…

This is the second of three books in VOLUME TWO of the series.

The kidnapping of a prince shocks the Merge and turns the Tourney on its head.

In New York, a desperate Archie and Inez play a cunning game of chess with the fates.

But if they are to force a checkmate, they must travel to the heart of an enemy empire and face down the rulers of a merciless realm…

This is the third of three books in VOLUME TWO of the series.

Weaveworld, by Clive Barker. Although I was already in love with the fantasy genre when I read this, it reaffirmed that love, and made me want to write about strange other-worlds which intersect with our own.

Neverwhere, by Neil Gaiman. I jumped aboard the Sandman train about a year into its run, and have been following Neil Gaiman ever since, from comics to books and movies and TV shows. This isn’t one of my favourites, but it’s definitely a strong influence.

Earthsea Trilogy, by Ursula Le Guin. I loved the scope of the Earthsea books, and how they were structured. I’m known for my action-packed series, which rely a lot on conflict, battles and wars, but the flow of my Archibald Lox series is more akin to the sweep and feel of Earthsea.

Charmed Life, by Diana Wynne Jones. One of the things I challenged myself to do with these books was to try to avoid big conflict resolutions. There’s nothing wrong with books that end with a big battle between the forces of good and evil — I’ve read and enjoyed many books like that over the years, and penned quite a few as well. But with this series I wanted to surprise my readers with endings that play with their expectations and subvert them. Diana Wynne Jones was a master at that, and her books have played a big role in the directions I’ve taken with Archie.

Harry Potter, by J K Rowling. I might very well have come up with grop (the sport that people play in the Merge) if I’d never read about quidditch (I was a fan of invented sports from reading 2000AD comics, and films like Rollerball) but there’s no denying that it made the leap a whole lot easier and more obvious than it might otherwise have been. There’s a grop tournament in the Volume 2 books which I’m sure will put some readers in mind of the quidditch world cup, but in all honesty it wasn’t a conscious emulation — I’d forgotten all about The Goblet Of Fire until I went to see the Harry Potter stage play in the West End, in which the quidditch world cup features heavily. I did start to worry, as I sat in the theatre watching the two-part play, about comparisons that people might draw between those scenes and mine — but by that time I’d already completed the first drafts of all three of the Volume 2 books, so there was no turning back! 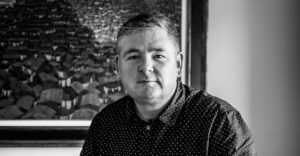 Darren Shan is a globally bestselling author who broke onto the fantasy/horror scene with Cirque Du Freak in January 2000. He has published more than fifty books, for children and adults, including the 10-book Demonata series and 12-book Zom-B series. Cirque Du Freak was adapted into a major Hollywood movie and it was recently announced that the Electric Shadow Company and Fantastic Films have teamed up to adapt his Zom-B series for television. Shan’s books have sold more than thirty million copies worldwide, in 40 countries and 32 languages. He has topped the bestseller charts in the US, UK, Ireland, Japan, and elsewhere. He lives in a small village in Ireland, with his wife and children.