THE OUTLAWS SCARLETT AND BROWNE

I am thrilled to be hosting a spot on THE OUTLAWS SCARLETT AND BROWNE by Jonathan Stroud Blog Tour hosted by Rockstar Book Tours. Check out my post and make sure to enter the giveaway! 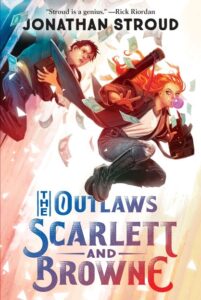 Scarlett McCain is an outlaw, a bank robber and a sharp shooter–a girl of formidable skills. Fueled by a tragic injustice in her past, she travels the broken kingdoms of England alone, carrying out daring heists in the surviving towns and fending off monstrous beasts in the wilds outside their fortified walls. Her life is dangerous, free, and simple–until she finds a wrecked bus on a lonely road. Albert Browne, the sole survivor of the accident, is a seemingly innocent and harmless youth. Against her better judgement, Scarlett agrees to escort him to safety.

This is a mistake. They are soon pursued by men with dogs and guns and explosives. Scarlett is used to running from the law, but these trackers are the most skilled she’s ever encountered–and they don’t seem to be after her. Just who is this Albert Browne Scarlett must uncover his shocking secrets if either of them are going to survive.

Praise For THE OUTLAWS SCARLETT AND BROWNE:

“Thrills and wisecrackery run neck and neck as Stroud establishes a sturdy cast of characters and lays the foundation of a post-apocalyptic . . . setting where adventure fantasy thrives. Add the razor-sharp banter that delights readers of the Bartimaeus series, and you can lay the smart money on another Stroud winner.” —The Bulletin of the Center for Children’s Books, starred review

“Fuelled by black humour, this action-packed odyssey grips from the first page.” —The Daily Mail

“Gunslinging action and pitch-black humour meets post-apocalyptic thrill ride in this brilliant new departure for the author of the Lockwood & Co. series.” —The Guardian

“Wanted: a sequel—as fast as you can pull a pistol.” —The Times (London)

“Jonathan Stroud is an exceptional world-builder. A smart and audacious first volume of a new series.” —The Sunday Times

“Stroud’s talent for creating astonishing yet utterly believable literary worlds is well known—and this is another triumph. Starring a pair of charismatic anti-heroes, intensely cinematic action and laced with characteristically dry wit.” —The Bookseller

“Stroud’s writing is a treat; brilliantly crafted world building, taut action scenes, fabulous villains and witty dialogue. A wild ride indeed, and the first in a series.” —The Observer (The New Review)

“This is bleedin’ brilliant from start to finish.” —SFX Magazine

“Stroud is a genius.” —Rick Riordan, bestselling author of the Trials of Apollo

THE OUTLAWS SCARLETT AND BROWNE by Jonathan Stroud Excerpt 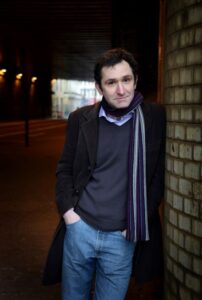 Jonathan Stroud is the author of two internationally bestselling series: the award-winning Bartimaeus Sequence, which has been published in thirty-six languages worldwide, and the critically acclaimed Lockwood & Co., which is currently being adapted by Netflix. His stand-alone titles include Heroes of the Valley, The Last Siege, The Leap, and Buried Fire. Jonathan lives near London with his wife and three children. You can visit him at jonathanstroud.com and follow him on Instagram at @jonathan.stroud and on Twitter at @JonathanAStroud.

3 winners will receive a finished copy of THE OUTLAWS SCARLETT AND BROWNE, US Only.