I am thrilled to be hosting a spot on THE HORROR FILM KILLER by Michael J. Bowler Blog Tour hosted by Rockstar Book Tours. Check out my post and make sure to enter the giveaway! 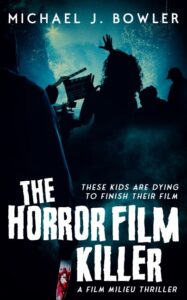 Pre-Order The eBook now for 99 cents!

What would you do if someone acted out—for real— the kill scenes from your student-made horror film?

That’s the dilemma facing high school seniors Cassie and Donovan. Best friends, aspiring filmmakers, and hopeful romantic partners, they set out to complete a feature-length horror film as a graduation project for their performing arts high school. Using actors and crew from among their classmates, they aim to finish the bulk of shooting over Spring Break. When several murders occur not far from their locations—each one recreating a specific “kill” scene from their script—they suddenly find themselves embroiled in a real-life horror movie neither of them bargained for.

Cassie’s police officer dad and his ex-girlfriend—a homicide detective Cassie once hoped would be her stepmom—allow the film shoot to continue because the killer has threatened to murder Donovan’s mother if they stop. Traps are set and arrests are made, but the killer—who might be a member of the cast or crew—is one step ahead of their every move.

Can Cassie and Donovan help the police unmask the psychopath before more people die?

Since my new novel, The Horror Film Killer, is an homage to classic horror films of the past, and the two main characters love horror movies above all else, I’m going to share my top five favorite horror films and why I like them so much. However, since horror has changed over the decades, I’m going to describe my top five prior to 1970 and then my top five since 1970, so this is really a Top Ten list, but whatever.

As a boy, I grew up watching on television the old Universal horror films of the 30s, 40s, and 50’s and it was these movies that caused me to fall in love with the genre. Those old black and white films weren’t particularly scary, but they provided a mood of dread and impending doom, usually accompanied by solid acting and dynamic musical underscoring, and I loved them. Here’s my list of the Top 5 Universal Horror Films:

Why The Wolfman as number 1? The script is great, the acting is great, the music score by Hans J. Salter is superb, and it provides genuine pathos. We feel for Larry Talbot and his plight. He didn’t ask for or deserve the werewolf curse. He’s a nice guy in the wrong place at the wrong time, and Lon Chaney Jr. is perfect in the part – likable, heroic, doomed by fate, desperate to find a way out. We can’t help but be sympathetic to him, and his performance anchors the film on every level. That human element within the monster is what makes all my five choices succeed. The Creature from the Black Lagoon is also a sympathetic character. Disrupted and attacked by humans, it simply wants to survive and be left alone. The Frankenstein monster is another example of the same motif, a creature that, through no fault of its own, is hated and scorned, but who just wants to be liked and accepted.

As a boy, Dark Shadows was (and remains) my favorite TV show and House of Dark Shadows was the first horror flick I saw in theaters. Of course, I loved it because I loved the show, but it’s also a terrific vampire movie and a million times better than the pathetic Tim Burton film from 2012. It’s unfortunate that the director, Dan Curtis, trimmed some scenes that would have helped clear up certain plot points, but the existing film is still great.

The Omen is a classic that everyone at my high school buzzed about, and it provided genuine scares and accessible human protagonists. The Gregory Peck character was sympathetic because he tried to do the right thing for his wife and instead brought death and destruction to everyone around him.

My other choices, as you can see, are all classics and vastly superior to any later attempts to remake or reimagine them. You might wonder why Final Destination 2 was chosen over the first installment? The first one was great, but the second film surpassed it in terms of clever writing and the unforgettable freeway pileup involving logs tumbling from the back of an open-bed truck. To this day, I will not drive behind an open bed truck, no matter what it’s carrying. LOL

So, there you have my favorite horror films, but there are many, many more I love, like The Conjuring series, for example, and The Exorcist. Much like the characters in The Horror Film Killer, horror remains my favorite genre of movies. I’m not a fan of excessive gore, however, and never have been. Gore isn’t frightening; it’s just gross. I like suspense, monsters, genuine scares, strong writing, and characters I can root for. Hopefully, I brought some of these qualities to my book. 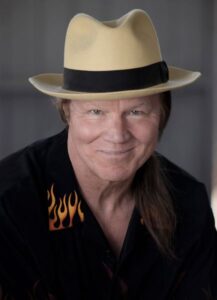 Michael J. Bowler is an award-winning author who grew up in Northern California. He majored in English/Theatre at Santa Clara University, earned a master’s in film production from Loyola Marymount University, a teaching credential in English from LMU, and a master’s in Special Education from Cal State University Dominguez Hills. Michael taught high school in Hawthorne, California for many years, both in general education and students with disabilities. When Michael is not writing you can find him volunteering as a youth mentor with the Big Brothers Big Sisters program, volunteering within the juvenile justice system in Los Angeles, or caring for his newly adopted son. He is a passionate advocate for the fair treatment of children and teens in California and hopes his books can show young people they are not alone in their struggles.

1 winner will win a signed finished copy of THE HORROR FILM KILLER, US Only.

3 winners will win an eBook of THE HORROR FILM KILLER, International.