I am thrilled to be hosting a spot on the BLACK PANTHER THE YOUNG PRINCE: SPELLBOUND by Ronald L. Smith Blog Tour hosted by Rockstar Book Tours. Check out my post and make sure to enter the giveaway! 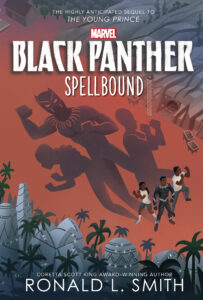 In the sequel to the hit middle grade novel, The Young Prince, T’Challa is heading back to America to visit his friends Sheila and Zeke, who are staying with Sheila’s grandma in Alabama over their summer break. T’Challa is excited to see his friends, but his fun summer vacation quickly turns into a nightmare. The small town has fallen under the sway of a charismatic politician named Achebe who is there to retrieve a spell book full of dark magic. When strange events start to take place, T’Challa begins to think that it’s no coincidence that Achebe arrived in Beaumont at the same time he did.

Will T’Challa figure out his role in Achebe’s sinister plot and break the spell he has over the town?

Wakandan prince T’Challa, with the help of his friends, uncovers mysteries and faces new foes. T’Challa, the 13-year-old prince of Wakanda, continues his adventures in America in this second entry in the Young Prince series. This time he is visiting Alabama with his Chicago friends, Sheila and Zeke. Staying with Sheila’s grandmother Miss Rose, the three are excited about all the fun activities they will partake in over the summer. But their revelry quickly gets interrupted thanks to a strange figure T’Challa encounters on multiple occasions, an acrobat called the Amazing Bob. Immediately, T’Challa gets a strange feeling about Bob, sensing that things are not what they seem with him. It turns out that the prince’s instincts are correct, as Bob is really Achebe, a politician with seemingly irresistible charm who has been wielding his power to influence the townspeople. Achebe has devious plans that require T’Challa’s unwitting participation and a spell book called the Book of Sins. It’s up to the young Wakandan and his friends to figure out and foil his plot before it’s too late and an irreversible price is paid. Smith delivers an action-filled story of friendship, youthful curiosity, and exploration that centers Black kids and is layered with anecdotes and storylines that highlight themes of social justice and power. Superhero fans will be satisfied by this latest installment. (Fantasy. 8-13)――Kirkus Reviews 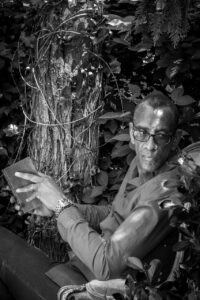 Ronald L. Smith is an award-winning writer of children’s literature including the middle grade novels Black Panther: The Young Prince, The Mesmerist, The Owls Have Come To Take Us Away, and Gloomstown, a Junior Library Guild Selection. His first novel, Hoodoo, earned him the 2016 Coretta Scott King/John Steptoe New Talent Author Award and the ILA Award for Intermediate Fiction from The International Literacy Association. Before he became a full-time writer, he worked in advertising and wrote TV commercials for big corporations. He is much happier writing books for young people.

3 winners will win a finished copy of BLACK PANTHER THE YOUNG PRINCE: SPELLBOUND, US Only.