Before there was Barack Obama, before there was Kamala Harris, there was Fighting Shirley Chisholm. A daughter of Barbadian immigrants, Chisholm developed her political chops in Brooklyn in the 1950s and went on to become the first Black woman elected to the U.S. House of Representatives. This “pepper pot,” as she was known, was not afraid to speak up for what she thought was right. While fighting for a better life for her constituents in New York’s 12th Congressional District, Chisholm routinely fought against sexism and racism in her own life and defied the norms of the time. As the first Black woman in the House and the first Black woman to seek the presidential nomination from a major political party, Shirley Chisholm laid the groundwork for those who would come after her.

Extensively researched and reviewed by experts, this inspiring biography traces Chisholm’s journey from her childhood in a small flat in Brooklyn where she read books with her sisters to Brooklyn College where she got her first taste of politics. Readers will cheer Chisholm on to victory from the campaign trail to the hallowed halls of the U.S. Capitol, where she fought for fair wages, equal rights, and an end to the Vietnam War. And while the presidential campaign trail in 1972 did not end in victory, Shirley Chisholm shows us how you can change a country when you speak up and speak out.

You can purchase Speak Up, Speak Out! at the following Retailers: 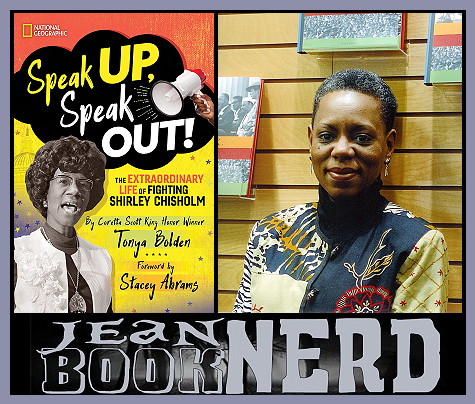