The Night Of meets Carrie when a boy finds a girl's body in the ditch on prom night...and becomes the primary suspect in her murder.
All Mario wants is one normal night before he graduates. He's spent most of high school riding solo and gaming with his only friend, Lucas. But when his mom asks him to take Elana Dexter to the prom as a favor to her father, his mother’s boss, he figures this might be his chance to be less of a loner.
Only, the night takes a turn quickly. First, Mario gets crowned Prom King alongside the school’s it-girl, Maribelle Starr. Which is weird enough. But what’s weirder is that when they put the crown on his head, hundreds of worms slither out of it and all over Mario. Just when Mario thought the night couldn’t get any worse, he sees something on the side of the road while driving Elana home. That something is Prom Queen Maribelle Starr—murdered and left for dead.
All Mario wanted was to go to prom...but somehow, he ended up in hell.
Underlined is a line of totally addictive romance, thriller, and horror paperback original titles coming to you fast and furious each month. Enjoy everything you want to read the way you want to read it.

I am addicted to true crime on YouTube and this feels like it is one of those stories that would cause a sensation and require multiple people to post about it.  When the prom queen ends up dead and the prom king finds her body, well, this should be an open and shut case.  But it’s not. I really tried to guess the outcome of this one and normally I am successful at picking out the killer, but WOW – I was really wrong.  This book is a page-turner!  It is so fast-paced and full of wit that I finished this in record time.

Mario, the prom king, becomes the prime suspect since Mirabelle is liked by everyone even though she can be a bit snarky.  As you read through the elements and the gossip, it becomes easy to rule out some characters while others remain on your radar.  This is told from multiple viewpoints and while that works for me, some readers may have issues following the story. This story has it all, news articles, text messages, and brief conversations that lead you to the killer but not as expected.

Lisa Schroeder is the author of more than twenty books for kids and teens. Her latest novel is WISH ON ALL THE STARS, with Scholastic. She lives in Oregon where she spends her time reading, writing, baking yummy treats, and hiking with her family. 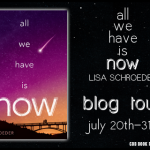 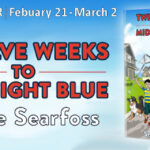