I am thrilled to be hosting a spot on the WITCHBLOOD by Matthew Erman & Lisa Sterle Blog Tour hosted by Rockstar Book Tours. Check out my post and make sure to enter the giveaway! 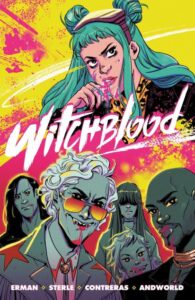 MAGIC IS IN THE BLOOD

A modern, Wild West road trip about a witch named Yonna cruising the Southwest as a band of bloodthirsty biker vampires, The Hounds of Love, hunt her scattered coven for the source of all magic: witch blood. From the critically acclaimed creators of The Modern Witch Tarot Deck and Long Lost comes Witchblood, a blend of action, lore, and Americana—perfect for fans of Buffy and American Gods.

“Loud and brash and high-energy, the kind of thing that makes readers yearn to see what will come next…[packed with] gripping, stylish thrills.” ― Women Write About Comics

“A mixtape in comic form, that blends familiar lore, with the roughness of the Wild West…the creative team has successfully given us a character who although vulnerable, packs some serious attitude, you can’t help but root for her, and with the dangers she has stumbled upon and the revelation of her WITCHBLOOD, we are on our way to be treated to some action-packed, magic in the making.” ― Geek Network

“Witchblood #1 is a fun, splashy start to a stylish series.” ― AV Club

“Want a chaotic, fun time? Witchblood is just the levels of chaos you need in your life.” ― Wandering Nerd Girl

“Witchblood is the most beautiful form of a passion project…This comic really is something special, not just for fans of witchcraft and vampires, but for anyone who loves colour, representation, and the craft done right.” ― The Valkyries

Talk about your favorite kind of character to write about

Matthew: Oh man, my favorite characters to write? I love anything that’s a challenge where I can stretch and do something I’ve never done before — or do something again that I maybe didn’t do justice to originally. I gravitate towards characters that have a bit of everything — I think that’s maybe how I build characters too: What do they find funny? What do they find sad? Do they have secrets or is there some big goal they’re striving towards? Creating unique answers and interesting ways to subvert these questions is what I really love. Paxton is cool — I think we did that with him. He’s pretty complex and while he’s certainly “evil” I think there are a lot of good reasons and interesting reasons for what he does and why does the things he does. Same with Yonna. They’re both kind of assholes, but in different ways and they’re both really charming and have a strong moral guide. They’re driven by something that’s bigger than they are at times, whether that’s a will to survive or a will to protect what they see as valuable or in Yonna’s case, to find what she loves about life. To return to the world of the living so-to-say.

Talk about your least favorite kind of character to write about

Matthew: Maybe real people? People that actually existed. I don’t think I’d want to write a story about like a real human being that lived. That’s not interesting to me, but at the same time I’d have to look at the individual. There are certain stories that can take a real person and really do something special and I’ve always been a fan of totally fictionalized versions of real people. So I don’t know, maybe there isn’t a kind of character I’d shy away from but right now if someone wanted me to write a story about a real person that was true to who that person was, I’d probably say no. 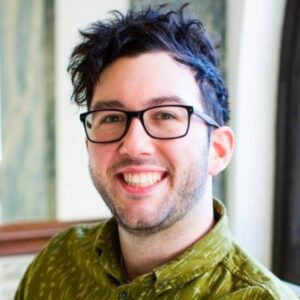 Matthew Erman is a comics writer from Columbus, Ohio. Alongside Lisa Sterle, he co-created the critically acclaimed comic horror series, Long Lost, which was optioned for Film/TV by Producer Jenny Klein (The Witcher, Daisy Jones and The Six). Erman has since worked on the comic book series Jim Henson’s The Dark Crystal: Age of Resistance and graphic novel Power Rangers: Sins of the Future with BOOM! Studios, series Care Bears: Unlock the Magic with IDW, the upcoming  science fiction/ horror / humorous romance original graphic novel BONDING, with artist and co-creator Emily Pearson for Vault Comics, and the smash supernatural action adventure comics series (with artist/co-creator Lisa Sterle) from Vault Comics, WITCHBLOOD. His short work can be found in anthologies such as Corpus (2018), Dead Beats (2019) and Everything is Going Wrong (2019). 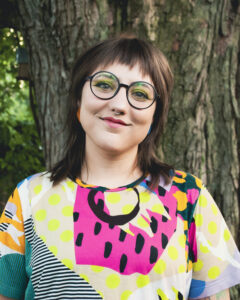 Lisa Sterle is a Columbus artist with work spanning from comic books to concept design to pop-culture-fueled illustration. Her work is often bright, expressive, and occasionally tinged with horror— marrying her two favorite themes: the beautiful and the grotesque. She has worked with HarperCollins, IDW, Image, Archie Comics, Vault Comics, BOOM! Studios, and many others. She is the co-creator of monthly comics Long Lost and Submerged (Vault Comics), and Witchblood (Vault comics), as well as creator of The Modern Witch Tarot Deck, a modern and diverse interpretation of the classic Rider-Waite tarot deck. Currently she is working on the graphic novel Squad with writer Maggie Tokuda-Hall for Greenwillow Books.

WITCHBLOOD is the first time Lisa Sterle’s wider (witchy/tarot/occult) audience has access to her all-new  book (to be found in book stores in which they frequent), and it is her first creator-owned project since The Modern Witch Tarot.

As the creator of the smash, best-selling, The Modern Witch Tarot, Lisa has a super rabid fan base, and with over 16K Twitter followers, she is known as one of the most “influential witches in the world!”  Further, Lisa was voted by Watkins Body Mind Spirit Magazine as one of the Top 100 Most Spiritually Influential  Living People  (Pope Francis is #1, Dalai Lama is #2; Lisa is #92 – Neil de Grasse Tyson is #93!)

2 winners will receive a finished copy of WITCHBLOOD, US Only.